What's not to love about May? Magnolia trees, lilacs, forget-me-nots, rhododendron blossoming, Pfingstrosen... even one of our climatis bloomed early. I just took these photos this morning...


Among other highs, May is rife with holidays. A holiday for us means that M only has to spend up to two hours at the office - though sometimes he takes the whole day off - rather than his usual 9 1/2 hours. These were this month's holidays, which meant that three of the weeks were short ones:


In addition, this coming Thursday is Fronleichnam (Corpus Christi - I still have to look up the significance of this day, though I know what the words mean), and we're in the middle of the two-week Pfingstferien (Pentecost holiday), so I even get a break from my school-related volunteer responsibilities.

You know what they say about dementia, right? It is not at all a big deal if you forget where you put something, go downstairs to get something but forget what you were going for when you get there, and so on?  The problems start when you start finding things in wierd places, like your car keys in the medicine cabinet, or your watch in the pantry. Well... M may or may not have found an empty and clean measuring cup in the refrigerator the other day. Now, while he willingly takes the blame for everything that goes wrong around here (he prefers that to discussions), he does not put away clean dishes. That's not a criticism - he just doesn't have to because I do it. So...it was I who put it there.


And then there was the day I arranged to meet my new friend for a walk. She called my cell phone and we agreed to walk in each other's direction and meet half way. I got to her house without seeing her, and then thought I should call her and find out where she was. I could not figure out on my rarely-used cell phone how to find the last call and redial it. Luckily she called me back. She was standing in front of my house - we had missed each other at the one place where there are two options - she went one way, and I went the other. 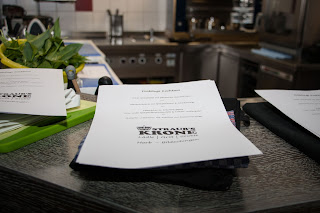 Posted by Ami im Schwabenland at 17:05