Out for Dinner in Nagold

On the enthusiastic recommendation from an acquaintance of ours, we went out to eat last Friday night at the Eisenbahn in Nagold. Since we can't always eat at our favorite restaurant, it's helpful to hear about other good restaurants in our general area. Nagold is a lovely small town with plenty of history, beautiful buildings, several parks, a large playground, and castle ruins to hike to on a hill above the town, and it is good for shopping. It is not touristy but absolutely worth a day's visit. 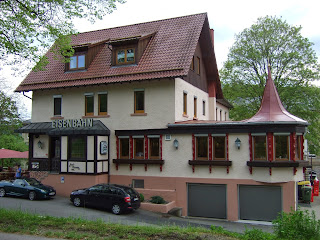 The  Eisenbahn is located at Olgastrasse 1, not far from the Bahnhof. It's a Gasthof, so they also have rooms for overnight stays. The short version of our review of the meal is that the prices are reasonable, the portions are sizable, the service was excellent, and the menu definitely appeals to those looking for regional Swabian cuisine. The atmosphere is nice and gemütlich, the room and table decorations are simple and inviting, and the menu is varied. There is a lot of Schwäbisch on the menu - sayings, descriptions, etc. - which I find charming.

My dad would (will!) love this restaurant. When he comes to Germany he wants authentic German food, not Italian, Chinese, etc. He likes to try local specialties, loves Maultaschen, and appreciates a filling and satisfying meal. 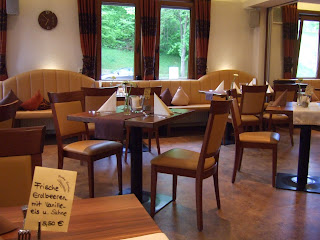 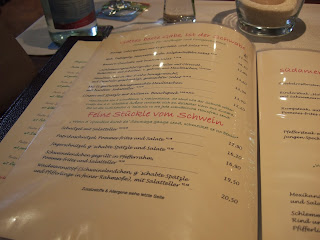 I took the picture of the menu before I'd settled on my decision, but I ended up ordering the Waidmannstopf, which is pork tenderloin and chanterelles in a cream sauce with Spätzle. I forgot to ask for a kleine Portion (small portion), so I had to request our server to box up my leftovers, which she gladly did. I probably could have finished it, but I wanted to leave room for fresh strawberries with vanilla ice cream and whipped cream!

The meal began with a gemischter  Salat (mixed salad), and I really liked the dressing. It was somewhat creamy and not too tart. In Germany a mixed salad has some lettuce, tomato, sometimes peppers, etc., but underneath there is also potato salad, finely grated carrots, thinly sliced radishes, corn, cucumber salad, and/or a red beet salad. There are usually five different types of salads on the plate. Americans need to know that restaurants in Germany have their own house dressing, and you do not get to choose a different one from a list of ten possibilities. 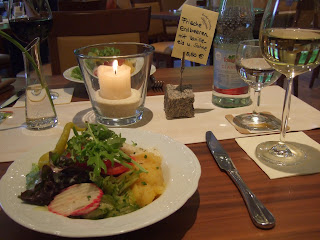 Notice that I always have the sign for the strawberries in my sights...

M ordered the Schlemmertopf, which was similar to my dish but also with beef and a darker sauce. We tried each other's, and I am really happy that I ordered what I did. The Schlemmertopf was also good, but for me the pork and sauce really hit the spot. Both are very Swabian dishes - meat and mushrooms, Spätzle (homemade noodles), and tons of sauce. They were very filling, the Spätzle were clearly homemade, and everything we had was convincingly made from fresh products. We cook with fresh produce and meat at home, so it's a real turn-off for us to be served frozen or canned vegetables, deep-fried potato products, packaged Spätzle, or sauce from a jar or prepared mix at a restaurant. At the Eisenbahn the Spätzle and sauces are homemade and the chefs use recipes from the current owner's great-grandmother! 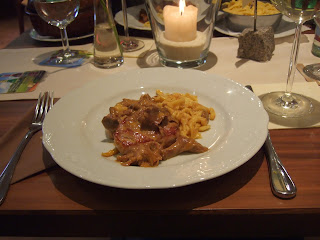 This was what was first served on my plate, but there was another hot plate on the side with the rest - another serving about the same size! Since I had my mind set on this since I'd walked in... 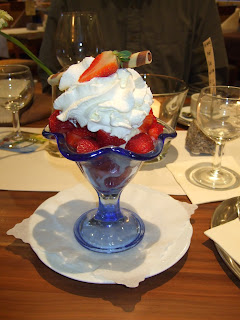 ...I went easy on the main course and brought it home for leftovers.

Naturally, since it's May, they had a special Spargelkarte (asparagus menu) and many of the choices looked quite tempting. I had just bought two kilos of Spargel that morning, though, to cook for Mother's Day - so we decided to order from the regular menu instead.

The service was friendly and attentive in a German way. This is one of the things I love about dining out in Germany - the server will usually check on you once during your main course, but otherwise he or she leaves you in peace to enjoy your meal! In the States they're at your table every five minutes interrupting your conversation to ask how things are, refilling your drinks whether you want a refill or not, and often whisking away people's plates while they're chewing their last bites and before others have finished their meals. In Germany the server usually waits until it appears that everyone at the table has finished (which you can signal subtly by placing your knife and fork together at the side of your plate), then she comes once and asks if everything was ok - which is exactly how it was at the Eisenbahn. Lovely!

Our only complaint is that the side dishes were limited to mainly Spätzle or Pommes (french fries). We like Spätzle, and theirs were really good! But I don't really like french fries, and I'm not always in the mood for Spätzle. With a Zwiebelrostbraten, for instance, I prefer Bratkartoffeln. They do offer Kroketten (like tater tots), Rösti-Taler (hash browns), and Salzkartoffeln (boiled potatoes) with certain dishes, so perhaps it's possible to request one of those sides instead of Pommes or Spätzle.

Update: I have heard from the Wirt (owner) that it is certainly possible to substitute side dishes, and that they sometimes have Bratkartoffeln as well. Good to know for next time!

All-in-all, we were pleased with our meal and will definitely return to the Eisenbahn, especially with guests. Parking is not a problem near the restaurant, and they have a nice Biergarten for when it's nice enough to sit outside. Although it was not busy the Friday evening we were there (it was Mother's Day weekend, so most families were saving dining out for Sunday...), our acquaintance recommended reserving a table because it was very busy both times he dined there recently. It is possible to reserve a table via email, which was a bonus for me - I still don't love talking on the phone in German if I can avoid it - and I received a response within one hour.

Wednesday is their Ruhetag (the restaurant is closed), as it states on their website, "damit d'r Wirt a'mol Zeit für d' Wirtin hat!" (so that the innkeeper also has some time for the hostess/his wife!).

Posted by Ami im Schwabenland at 19:41