My Schwiegermutter has been staying with us over Easter, and since M had to go back to the office yesterday to row with the rest of the slaves, she and I took a day trip to the tiny village of Nöttingen to hunt down the house where my ancestors (specifically my great-great-great grandfather) lived before emigrating to America. We had photos of part of the house from 1956 and 1989 and the name of the town, but no address. The special marking on the house gave us confidence that we could find it.


My brother had found the house in 1984 when he was an exchange student, my mom found it after quite a bit of wandering around town and asking locals with the help of her guide (my brother's former host mother), and the wife of my grandfather's second cousin found the house around 1960 and actually visited with the woman who lived there (and whose family still lives there, according to the name on the mailbox!). I've decided not to ask why none of those folks took note of the address...

We set off from Horb in the morning headed for Pforzheim by train. We had an hour to kill in Pforzheim before our bus left for Nöttingen, so we wandered around a bit and found two Protestant (and therefore locked) churches, a closed museum, and nothing else worthy of note. Unfortunately Pforzheim was almost totally destroyed on 23 February 1945, and rebuilt with ugly modern buildings, so it has no charm that we noticed. We decided to look for the Stadtinfo later.

As our bus pulled up, the poor driver smashed clipped the side mirror of a bus parked near where she needed to be, and so we waited while she and the other driver photographed the damage, discussed what to do, filled out their reports, and traded insurance and contact information. Twenty-five minutes later we were on our way to Nöttingen.

As we pulled into the teeny town, I peeked down side streets we passed to get a feel for what the houses looked like. I spied in the distance down a narrow Gasse some writing on the timber of a house. Could it be that simple? The bus stopped a moment later, and we got out. I headed for that Gasse, but soon we saw that the names were wrong. Oh well, we kept walking. A few yards beyond that first house, I turned around to look behind me (as a good photographer should), and lo and behold, there was the house with Jacob Jung's name. We had stumbled upon the house within two minutes of getting off the bus!

[Incidentally, it took us about 40 minutes to find the Stadtinfo in Pforzheim two hours later following signs and arrows posted around the Stadtmitte, but that's a story better left untold.]

I snapped a bunch of pictures hoping someone would come out and ask, "What's all this, then?!" so I could ask him or her about the inscription. But either I wasn't seen, or this crap happens all the time as Americans wearing silly grins come looking for their ancestors' roots. There was a guy washing his car with his kids on the same little street, but he paid us no mind. 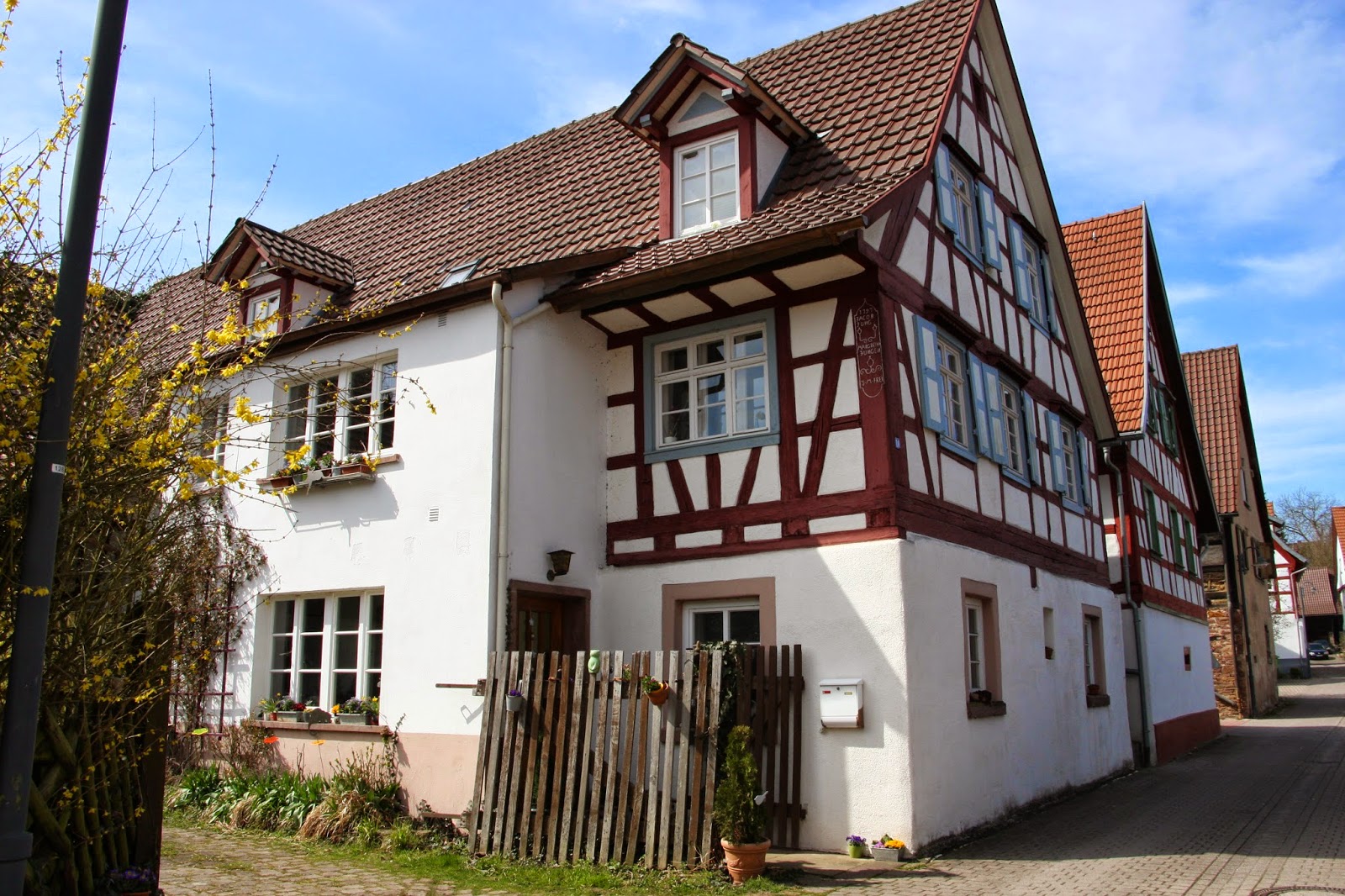 We had scheduled about two hours to spend in Nöttingen searching for the house before catching the bus back to Pforzheim and were down to 90 minutes due to the mirror incident, so with 86 remaining minutes we did some more wandering. We grabbed a Schnitzel and a cappuccino at the local butcher and then decided to check out the church. It's a protestant church, so it, too, was locked. On the way there we noticed quite a few houses had similar inscriptions to the Jung house, and I took more photos.


After we walked around the church checking the doors, we spied a poor chap out on his balcony in a neighboring house checking his text messages. We scurried over looking all innocent, and when he made eye contact we asked him if he could tell us something about the inscriptions on the corners of the houses around. His neighbor's house had one. He asked with a quizzical look, "What is written there?" We said, "For instance, here on your neighbor's house it says on the bottom 'Z.M. Frei'. Do you know what that means?"  He said, "I have no idea. I just bought this house six months ago." Perfect. The first guy in town we speak to is a newbie.

Back to the narrow Gasse and the guy washing his car. He had to know, right? He'd finished washing his car despite his childrens' help and had disappeared inside his house. We heard another guy washing his car a little further on (Swabians really like their cars to be clean), so we perservered. He was very friendly and told us the "Z.M. Frei" indicates Zimmermann Frei, the carpenter who built the houses inscribed that way. Zimmermann means carpenter, and Frei was his last name. We think this was his house, located on the main road through town: 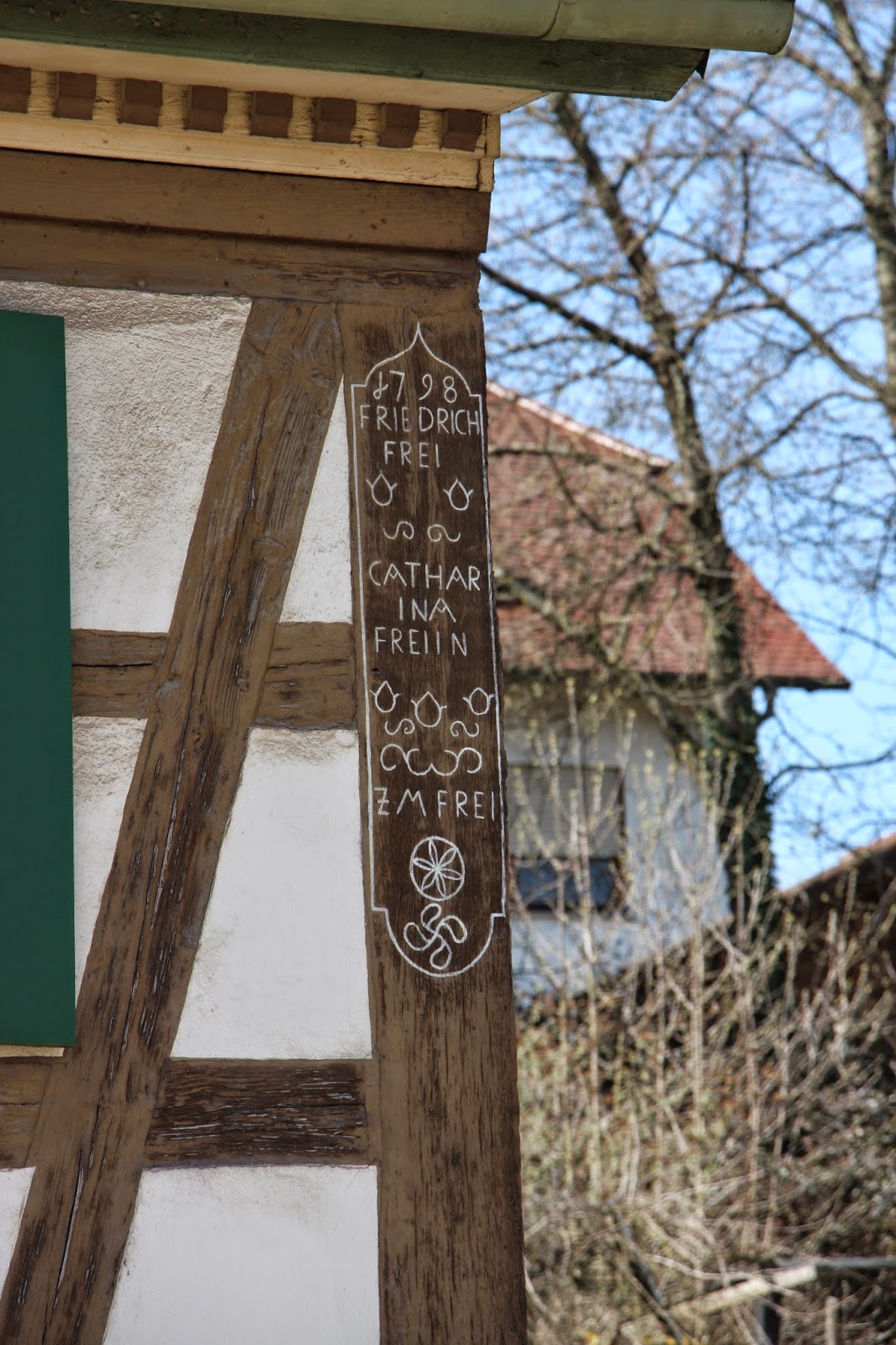 On this inscription you see Catharina's family name as "Freiin", which is the feminine version of her husband's name "Frei".

The friendly car-washer also told us that these houses are all under Denkmalschutz (historical monument protection).

Who were Jacob and Margretha Jung? Jacob was my great-great-great-great grandfather, and Margretha was his first wife. They had one son, who died before his first birthday, and Margretha died a few years later. Jacob was born in 1768 in Nöttingen and died there in 1846. His son (also Jacob, of course), daughter, and widow (and 2nd wife) Magdalena emigrated to America in 1853 because he could see no promise of a successful future in Germany - settling briefly in Cleveland, Ohio and then moving to Sheboygan, Wisconsin (my hometown) in 1854. They had heard that Jacob, who had learned the wheelwright trade back in Germany, might find work in Wisconsin. He got a job with a wagon-making firm that had "plenty of work but not much money," and accepted an arrangement that paid part of his wages in credit. Eventually the owners owed him so much that he bought them out and took over the business. Several generations later Wesley Jung donated a large number of wagons and carriages made by the Jung Carriage Company to the Wade House Historical Society, which then created the Wesley W. Jung Carriage Museum near Sheboygan.

So I have ancestors who, considering they could have come from anywhere in Germany, lived more than 200 years ago in a tiny town only 90 minutes from my new home. Perhaps this is why I feel so comfortable and content in southern Germany. I have returned to my roots.