Preparing for a Day Trip

This week Friday - if the Bahn strikes don't get in the way - I'm off to Ulm with my Schwiegermutter for a reconnaissance tour in preparation for a summer trip with a group of 14 middle school students (7 from Esslingen and 7 from Sheboygan, WI USA). We've both been to Ulm before, but we want to plan our route and schedule and see how much time it takes to do our little town tour, (hopefully) climb the church steeple, and get back to the Bahnhof in time to get the kids back by suppertime.

A day trip like this for us doesn't involve just buying a train ticket and going there. I like to have a general plan before arriving in a town which involves ordering books and reading up in the days or weeks before the outing.

A few weeks ago I ordered a book and the Merian magazine about Ulm and found my old books and brochures from previous visits. Last week and yesterday afternoon, I started digging in earnestly to re-learn about the town and decide what is interesting enough to show and tell the students and what is dull enough to be left out. 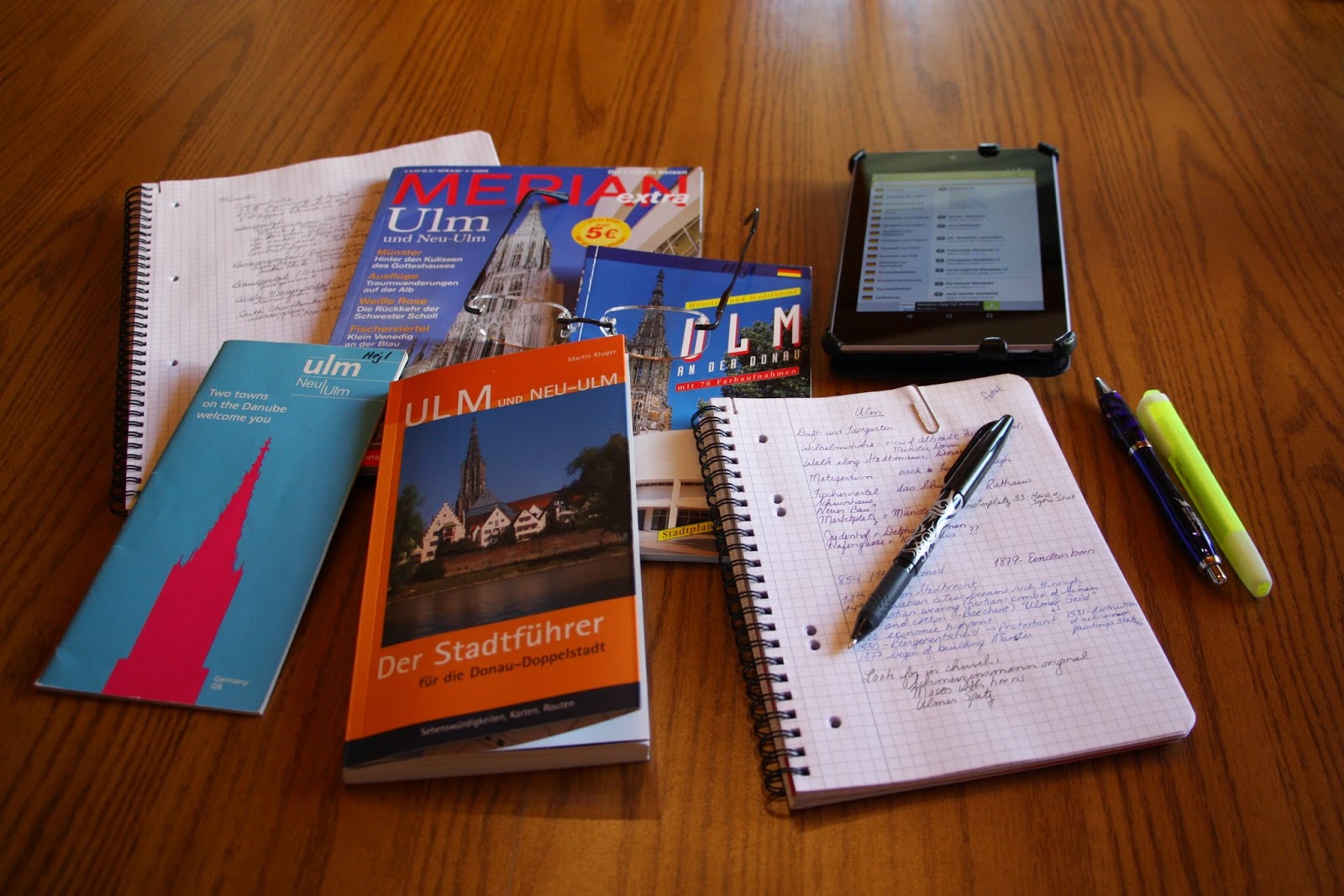 I cued up dict.cc on my Nexus, got out my notebooks, pens, and highlighter, found my reading/writing glasses, and got to work.

We'd already decided to head straight for the Münster (big church) via the Stadtinfo when we get off the train, so I started my reading and note-taking there. Two hours later I still wasn't even out of the church yet. Granted, I had a few interruptions, but it is so interesting!! (though probably not for middle school students.) The artwork, the carvings, the architecture, the sculptures, the history, the frescoes, the gargoyle water spouts, the arches, the portals, the statues... The teacher and life-long learner in me is going nuts!

Then reality reared its ugly head and I chose six things to tell the kids to look for when we go into the church, which they should be able to locate in the seven minutes before they lose interest and start thinking about ice cream: the Moses sculpture with horns, the tabernacle, the Ulmer Spatz (sparrow), the original Schmerzensmann (man of sorrows), the choir stalls and Herrgottsbscheißerle, the stain glass windows from the 1400s, and the choir arch fresco. I may challenge them to find the carving of Pythagoras in the choir stall if any of them have heard of the Pythagorean theorum.

Then, if I make it on Friday, I'll challenge the kids in July to a climb up the tallest church steeple in the world - 768 steps to the highest outlook platform. I need to try it myself first because it would be rather humiliating to challenge a bunch of kids to a climb only to poop out half way up. (See update below)

After that we'll take a short break for lunch and then have a walking tour around the rest of the town and along the Danube. Because Hans and Sophie Scholl lived with their family in Ulm for several years, I'll be able to tell them some of the story of "die Weiße Rose" (the White Rose). I'll share with them the two town legends I know about Ulm - the one that explains why there are statues of sparrows all over town and the one about the water spout on the church which is an ostrich facing backward with the water coming out of its bum. We'll stroll through the touch and scent garden at the close of our tour and end up back at the Bahnhof. And hopefully we'll keep them interested throughout the day.

But this Friday is about preparing for all that. I'll take all the scenery and attraction photos I need then so I can focus on the kids in July and take people pictures. I'll also scope out possible locations for group photos.

What do I pack and bring along for a day trip like this? 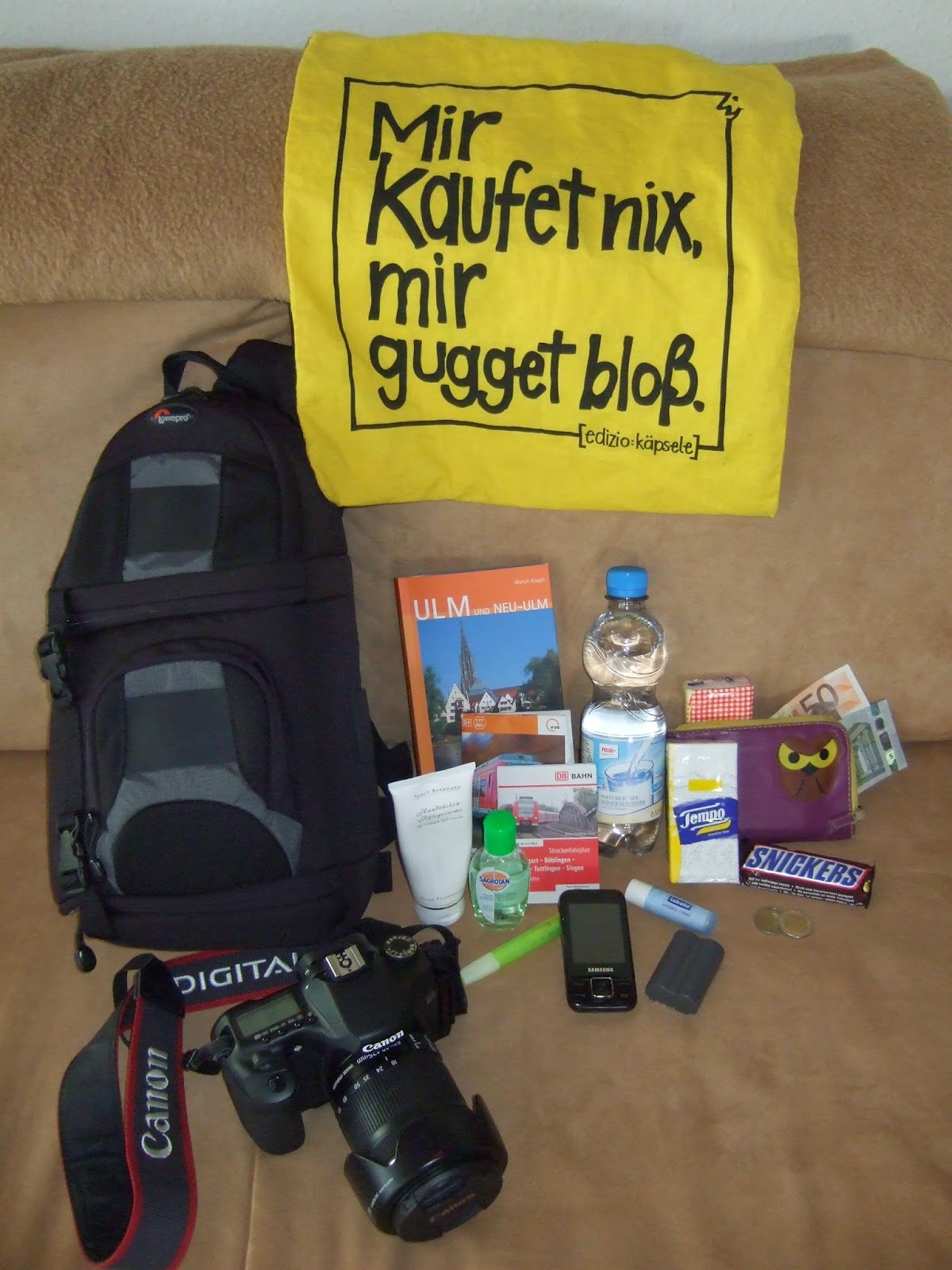 I try to stuff all of this into my camera bag/backpack, which is filled mainly with the camera but has lots of other handy pockets. I can't leave any of it behind. Of course I bring my newest tour book and a highlighter, as well as the train and S-Bahn schedules for getting me from Horb to Esslingen and back. I've learned to bring an extra camera battery and memory card just in case, and naturally at least two packs of tissues, lip moisturizer, and hand lotion. I also bring hand sanitizer because I'm one of those who can practically feel the creepy crawly filth lurking on the parts of the trains and buses one must touch.

Then we have the angry owl wallet filled with some Euros, my insurance card, a credit card, my Bahn25 card, driver's license and Aufenthaltstitel (residency permit), as well as some Euro coins in case I need to use and can actually find a public restroom. The yellow thing* is a canvas bag in case I buy something that doesn't fit into the camera bag, which is incredibly unlikely because the one thing my Schwiegermutter and I never do on day trips is shop for anything! But in Germany you never go anywhere without a canvas bag or two tucked in somewhere.

*For those of you to whom the Schwäbisch dialect is as much a mystery as it is to most Germans not from Swabia, the saying on the bag translates to "Wir kaufen nichts, wir schauen nur" in Hochdeutsch and "We're not buying anything, we're just looking" in English.

You see my old-school Handy (cell phone - and I say "old-school" only because it isn't a fancy Smart Phone and I don't spend all my time playing with it and staring at it) there as well, which I actually remembered to charge this week, a bottle of water, and an Ohnmachts-Snickers. "Ohnmacht" refers to a loss of consciousness, and "Ohnmachtsbrot" is a word made up by a family friend for a snack to bring along while hiking, biking, or skiing in case you are suddenly overcome with hunger and need a nibble to prevent yourself from fainting. My Ohnmachtsbrot is usually a Snickers because it's got everything I need - protein in the peanuts, caramel, and chocolate. In the scorching heat of summertime I usually swap the Ohnmachts-Snickers for a bag of Ohnmachts-Butterkekse (cookies).

I used to bring my reading glasses, too, but in the name of saving space and bringing no extra ballast, I now just make do by holding my book at arm's length.

What do you pack when you go on a day trip?


Update: I made it up 335 feet to the third platform. Fitness-wise I could have made it to the top without a problem,  but apparently I do have a touch of Höhenangst (fear of heights) and was already feeling dizzy, unsteady, and slightly freaked out. To go up to the tippy-top I would have had to go up a very narrow winding two-way stairway, and that sounded like a seriously bad idea. I already felt just a bit like this goat.