Here on the edge of the Schwarzwald we've been getting a fair bit of snow lately - for us. I realize it's nothing compared to the recent blizzard that shut down the city of Boston, and also really not much compared to a normal winter in Wisconsin. But we've had plenty for this winter and I want it to stop.

I should say that I am glad for the businesses and people who rely on snow and cold for their livelihoods - ski hills, snowshoe salesmen, etc. And yes, the snow is pretty when it sticks to the trees.

But I'd just as soon have a snowless winter, personally.

I'm using the photo below to illustrate what makes a few inches (say 12 cm) of snow a pain in my ass here. Notice that the street is just wide enough for two cars to pass each other - unless, of course, there is a car parked on the side of the road, which there usually is. With a car parked on either side of the street, a Wisconsin snowplow wouldn't get through. Also notice that there is no patch of grass between the sidewalk and the street. You don't miss it 'til you ain't got it. More on that shortly. 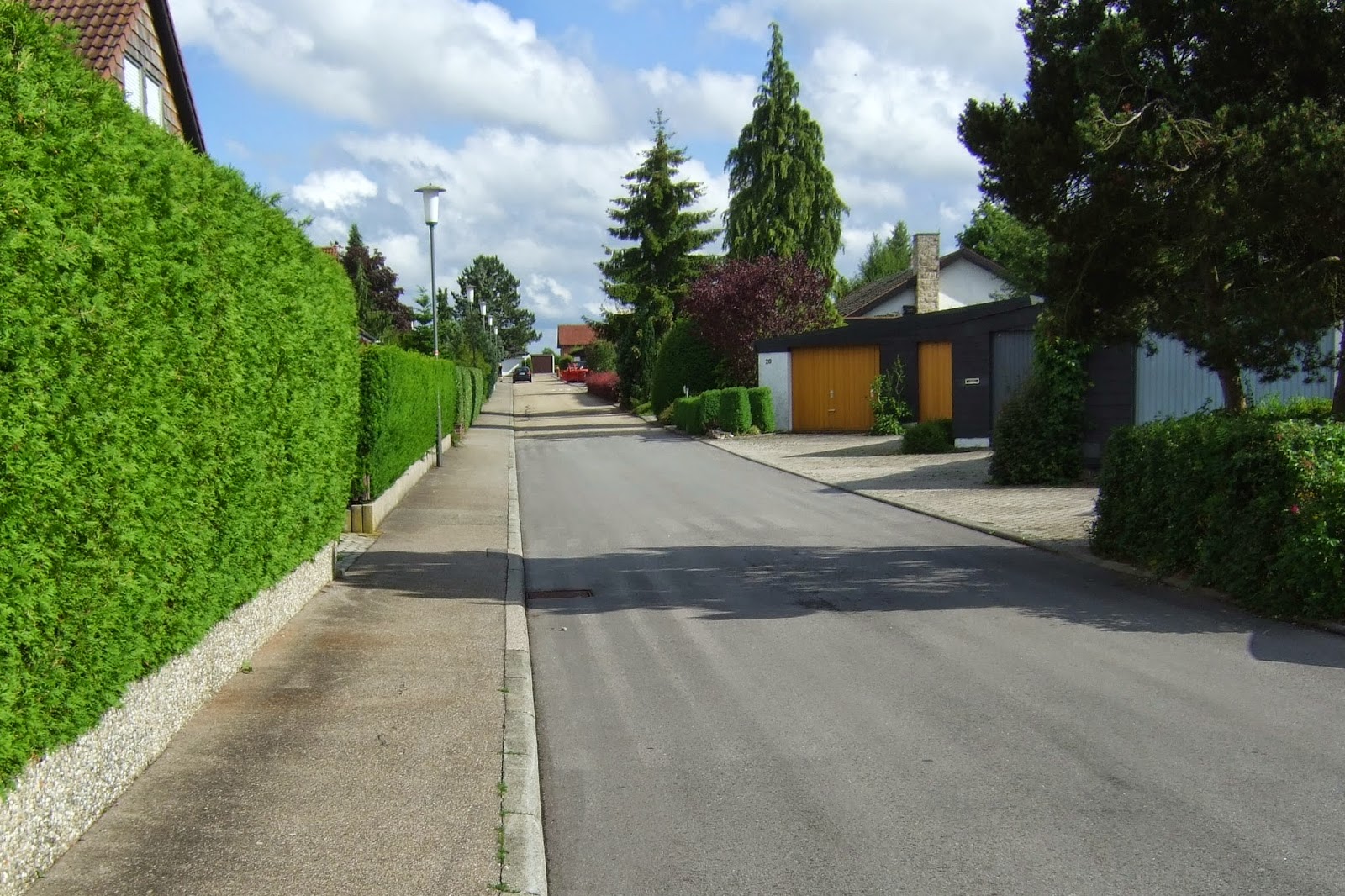 Lastly, that hedge. That's our hedge down a little ways on the left, but it's not that high anymore. We had it cut back two years ago, and now it's about chest-high on me when I'm standing on the sidewalk. After today I may suggest we cut it back again to about knee-height.

This was today, just after I'd finished shoveling the first time:


You can see that the street is now a single-track (but two-way) road, and there's a pile of snow all along the sidewalk in the street. Germans - at least in this area - tend to shovel the snow from their sidewalk into the street for the plow to take with it when it passes. And the plow does take about half of it. The other half is, of course, pushed back onto the sidewalk. To be shoveled back onto the street... This cycle continues until it gets warm enough for the snow in the street to melt and drip into the sewers. The plow makes one or two passes, and the plowed path is the width of one car. Driving, which I already hate even when the roads are dry and obstacle-free, takes on a whole new level of fun when the already-narrow streets and roads lose half their width.

I can't get on board with the shovel-it-into-the-street method, and I want a clean sidewalk. So I throw the snow over our hedge into the yard. It's additional exercise out in the fresh air, right?

This was the street I lived on in Wisconsin: 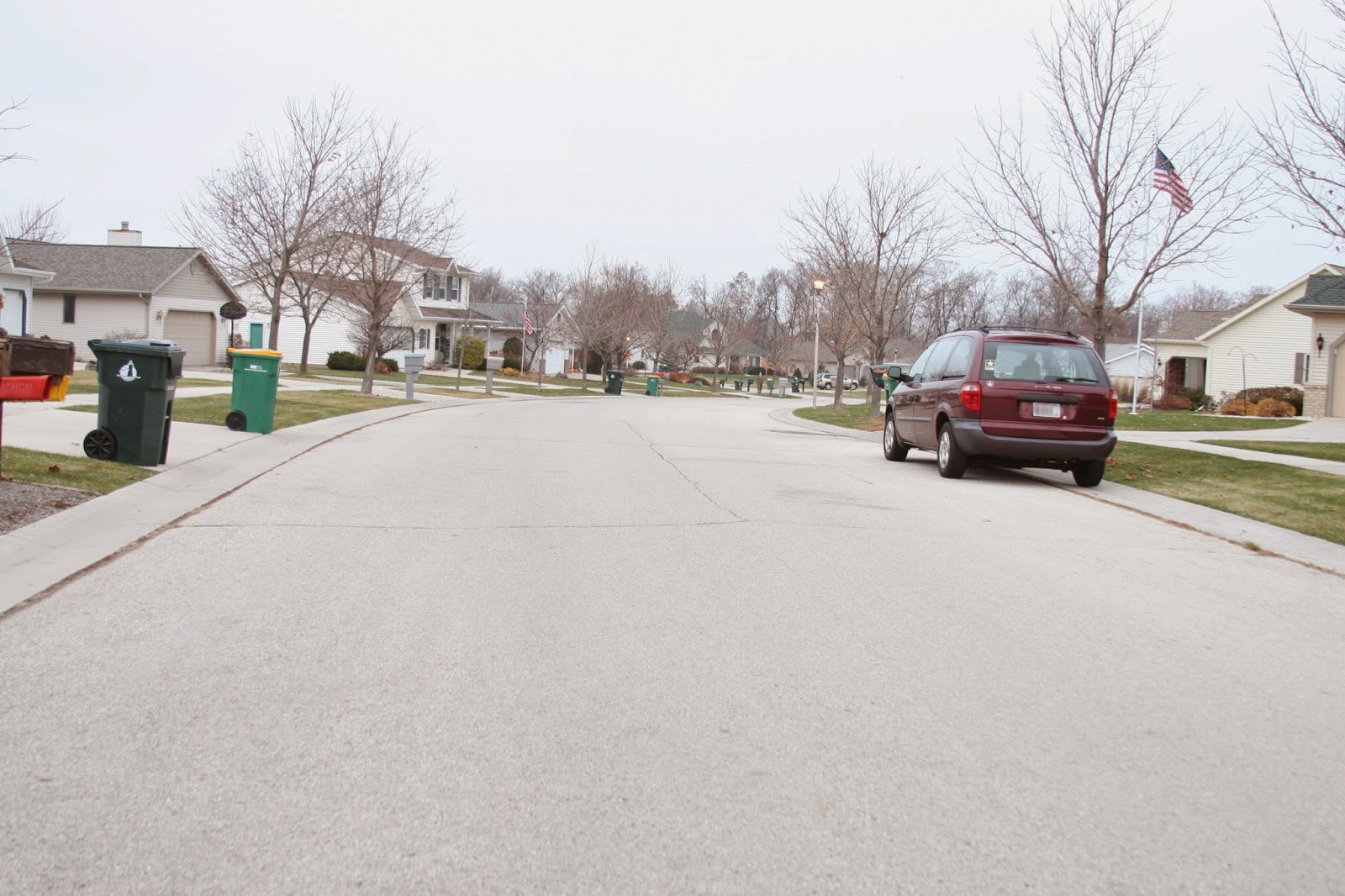 When the plow comes by in Wisconsin, he pushes the snow off the street onto the grassy patch and across the end of the driveway. You have to then shovel out the end of your driveway again, but you don't have to worry about the snow on the grassy strip unless it covers your mailbox - then you have to dig that out too or wait until spring to get your mail.

Here in the Schwabenland, since yards are bordered by fences, six-foot hedges, and/or high stone walls, there's just no place for the snow to go - hence the shovel-snow plow street battle, which in Wisconsin is only a problem at the end of one's driveway.

Speaking of driveways, ours is made of bricks and there are two deep tire grooves where the car comes and goes. If I had a dime for every time our shovel has a head-on collision with a misaligned brick... "Sccrraaaaapppppeeee.....BAM! 'Shit!'"...as I get impaled in the stomach by the handle of my shovel.

In the end, big deal. It's snow. Shovel it and shut up, right? I started writing this blog four hours ago, and as I sit here now I'm looking out to blue sky, sun shining on the snow drifts, and snow throwing itself off the tree branches and dripping from everywhere. The snow in the street has already melted, and now the sun is going after the piles of snow on the side of the street.

So the joke's on me. The snow that everyone else pushed into the street while I was heaving it over our hedge like an Amazon? Melting as I type and dripping into the sewer.

Is it spring yet?

Posted by Ami im Schwabenland at 16:24