We all know an American who has liked or re-posted a visual on social media about being sick of having to "press 1 for English" and probably has grumbled about immigrants (especially from south of the border) who live in the U.S. but don't speak English (well). I often wonder if they have ever considered the reverse situation. What about a U.S.-American living in a country where English isn't the primary language?

I have met quite a few expats lately from English-speaking countries through their blogs and mine, and while every expat has a bad day or a frustrating week from time to time, they all seem to be integrating well and are making efforts to learn German. Many of them write about the German courses they are taking as well as the very understandable frustrations of learning the language. I also met an American recently who has been living here longer than I have but has not learned more than a few phrases in German. She told me it's too hard since the people around her speak the local dialect, which is like a non-English-speaking person saying he can't learn English because he chose to live in Mississippi where everyone tawks fuuny.

I often wished, when I heard the "press 1 for English" message in the U.S., that I could press 3 for German. I don't know if the people who gripe about pressing 1 are annoyed that they have to press a button or because Spanish is an option for those who need it. Since I've never heard anyone complain about entering their nine-digit social security number or ten-digit account number, I suspect the latter.

When I have the option to speak to someone in English, do I? It depends. In a restaurant or store, absolutely not - not even when they recognize my accent and speak English to me. When I am face-to-face with someone, for instance in the airport, and am asked "Englisch oder Deutsch?" I say either is fine. But on the phone dealing with insurance, credit cards, problems with a plane reservation...you bet I request English if I can. It is very difficult speaking a foreign language on the phone because you don't have the visual aids of eye contact, body language, and facial expression. You don't realize how much you rely on those cues until you try to speak and understand a foreign language on the phone. I am fluent enough in German, but if I have to deal with a problem on the phone and I'm not sure I will understand everything I need to understand, I am grateful when I have the English option.

I'd like to ask the Press 1 Protesters: Would you resent me for wishing I had the option to "press 2 for English" while I'm living in Germany? If you were in a country on vacation or for business where English is not the primary language and needed help with your stolen credit card, to change your flight arrangements, or medical help, would you not be grateful to have the option to communicate in English? Then what is wrong with a business or government organization in the U.S. (which has no official language) offering language options to phone callers? The complainers, I would imagine, would not enter a foreign country fluent in that country's language (if they entered a foreign country at all). I also would like to hear the quality of their English. 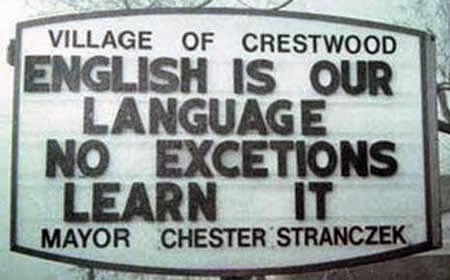 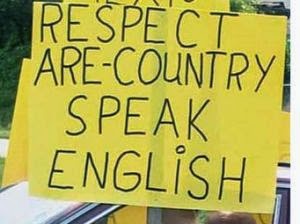 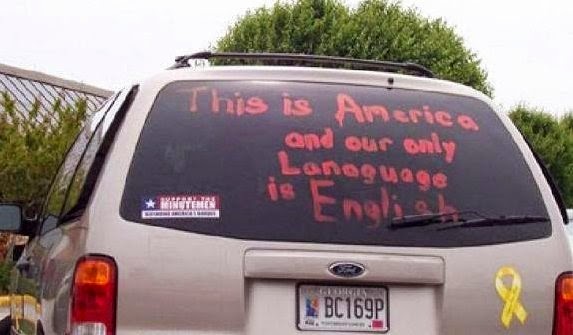 This attitude really grinds my gears. Why don't we embrace other languages? Why don't we improve our own language skills and not worry about which language others prefer to speak? If the only thing these people have to complain about today is that they have to "press 1," then they should consider themselves pretty damn lucky. First World problems, anyone?

Most people have heard this one:

What do you call a person who speaks 3 languages?
trilingual

What do you call a person who speaks 2 languages?
bilingual

What do you call a person who speaks 1 language?
an American

I sure would love to see that stereotype change, along with the attitude so seemingly popular in the U.S. that people who don't speak and understand English should "get out."

*The writer should also take the time to learn about periods, commas, apostrophes and capitalization, but...whatever.

What about a campaign with protester signs and ecards that send the message "This is America, and our language is English. If you don't know the difference between its and it's, lay and lie, are and our, and your and you're or you think it's acceptable to say 'me and my friend,' get the hell out of the U.S." But where on earth would all those people go?

England doesn't want them back.


*I have tried to find the sources of these photos, but they have been used and re-used so many times the original photographer has been lost. They can be found through a search for "misspelled Tea Party signs."
Posted by Ami im Schwabenland at 08:58