Where shall I begin?

I came into the second week of hunting class with a better idea of what to expect, and I felt prepared. For this week I'd rented an AirBnB flat in Eigeltingen, and it was perfect!! It had a refrigerator for my wine and cheese, a balconey for watching the sunsets, a little kitchen, and plenty of space to spread out. I truly wish I had booked this for the final week as well. 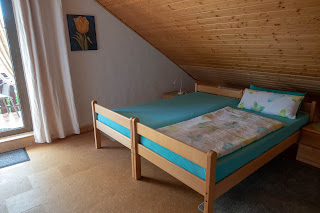 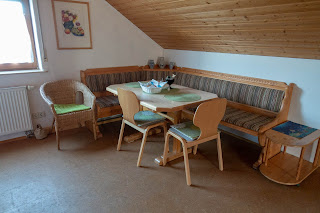 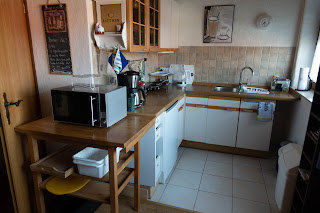 We were scheduled right away on Monday to be back on the Schießstand (shooting range), but two drivers had provided the school with roadkill, so we had a go at Aufbrechen ("field dressing," as it's so ambiguously expressed in English). The accident victims were two Rehböcke (male roe deer). Ludger, our teacher, demonstrated on the first one how to do what needed doing and how to identify the various organs, and for the second one three of us students took hand to knife. I was bracing to be grossed out, but it was not bad. On the contrary it was quite interesting, and I wish I had stepped up as one of the volunteers.

But because we did not go to the Schießstand on Monday, that meant every other day we'd be shooting - Tuesday through Saturday.

The classroom work covered Haarwild (furry game), Jagdrecht (hunting laws), and Waffenrecht (gun laws). After my experience the first week feeling like there was too much I didn't understand, I was surprised to find that it's getting easier language-wise. The man who sits next to me is very helpful when there's a word I don't hear properly or understand (Danke Hans-Martin!!), and I'm getting braver about raising my hand when I have a question or need something explained.

So the main drama of the week for me involved the shooting. I approached it with at least less fear than in the first week, in part because I had an idea what to expect: I knew already the gun is heavy, I knew I'd have to shoot at Tontauben (clay pigeons), and I knew I probably wouldn't hit any unless I got lucky. Remember, I'm a realist, not a dreamer.

What I wasn't prepared for were the bruises and the pain. Although Tontaubenschießen is not part of the test, we had to shoot at 120 of them. I had some instruction on how I should stand and "aim" on the first day, but after that I just had to shoot. After everyone else was finished with the pigeons, I had another round of 15 to go. One of my young classmates offered to shoot with me and give me some tips, which I gladly accepted! He even told me if there's something I don't understand, he'll try to explain in English. (Falls du dies irgendwann liest, danke vielmals Jannick!")
Hauptsache: Bring es hinter mir!  Shy of my last two shots, I had to quit because I couldn't take the recoil anymore.

I don't even remember anymore the order in which we shot at everything else: The Kipphasen (running tip-rabbits) with the Flinte from about 35 m,  the stationary Rehbock (roe deer) with the Büchse from 100m away (sitting, resting the front stock of the gun on a wooden ledge, with a sight), and the Keiler (running wild boar) with the Büchse from 50-60 meters.

I love the Rehbock and hit it with a shot that counts for the test all 21 times I shot at it. The recoil of the Büchse is not nearly as bad as with the Flinte. The Keiler was also ok once I got the hang of it, and I got good enough scores to count as "pass" for the future test.

On Tuesday I was in a group of 6 students, and the five guys went first, one at a time. They saw various degrees of success, but all looked pretty natural and confident. Then it was my turn. The Schießtrainer, Mike, took one look at my face and said to the guys, "Hey Jungs, macht mal eine Kaffeepause." ("Go take a coffee break") That was fabulous! My classmates don't do anything wrong, but I feel pressure to hurry up, knowing they're waiting for their next turn. I felt much better doing this alone with Mike so I could ask my stupid questions and focus better. Still, my aim was too high. Every. Bloody. Time. By chance I think I did hit two of them (out of 20).

Later, when it was my first turn at the Keiler with Ludger as the trainer, one of the thoughtful lads asked, "Should we leave?" "Das wäre nett, danke!" Ludger asked what was going on, and I just said I can concentrate better.

I'm going to skip to the end of the week. Saturday was our last day of class and shooting. Both the Rehbock and the Keiler were going well enough. I no longer needed my classmates to leave, in part because we were now in smaller groups - just four. At the Kipphasen finally, after seemingly ages, I asked enough questions and something clicked with me. In my final round I missed the first two but hit the last eight of the little bastards. I'd finally got my head/eye low enough over the Schienenlauf (top of the barrel) and was able to hold the gun steady enough. Whether I'll be able to hit them again when we're back at the Schießstand in five weeks, we'll just have to see. But at least the week ended on a good note!

Relieved to be back home on Saturday evening, I grumbled to M that the gun (the Flinte, mainly) is too heavy. He disappeared into the basement and came back with a Hantelstange (the bar from bench press weights). "Train with this!" It's heavier and longer than the guns I have to use, but it should be closer to what I actually have to do at the Schießstand than the "zwei Kisten Bier" Ludger told me to lift repeatedly every day.

Believe it or not, I am no longer dreading the shooting! I still have a long way to go with the Waffenhandhabung - safe weapons handling - before I'll be able to pass that part of the test (and if a student fails that, s/he's just done - s/he doesn't get to shoot). In that part we are expected to be familiar with Langwaffen and Kurzwaffen, and demonstrate safe handling based on the situation described to us by the Testprüfer (test officials), narrating our actions before or while we carry them out.

For now it's back to the books, notes, and training videos, household chores and Gartenarbeit, Privatunterricht (I'm giving private language lessons 3 times a week) and wonderful Nachmittagsnickerchen (afternoon catnaps).

Other blog posts that might be of interest:
Jagdschule Report 1
Hunting in Germany
Why I'm doing this

Posted by Ami im Schwabenland at 10:59

Email ThisBlogThis!Share to TwitterShare to FacebookShare to Pinterest
Labels: hunting