I was sitting in my home office today with the front door wide open to let in the cool morning air (the office is right next to the front door). This is not unusual for me, and sometimes the local wildlife wanders in. The neighbor’s cat, bees, dragonflies, luckily no birds yet…

Today I heard some awkward rustling on the porch and then the doorbell. We sometimes get beggars who come with laminated notes written in sketchy German and English, and sometimes they try to block the door as you shut it, so I braced myself. I don’t like people in general and do not appreciate being interrupted by spontaneous doorbell-ringers, so my mood was abruptly “Leave me the hell alone!”

Cutting to the end, he showed me his brushes and brooms, and as I was saying, “I’m sorry, we have everything we nee….wait. What’s that you have there?!”

It’s a long-handled extendable cobweb brush made of goat hair! That’s probably a total lie, but it’s soft as hell. 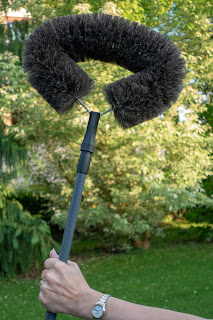 SHUT UP AND TAKE MY MONEY!!!

I paid him his asking price (€30) because I'm hopeless at haggling. After I closed the door and ran my fingers through the delciously soft brush a few times, I went after the damn cobwebs in the office that I haven’t been able to reach and have been driving me nuts for weeks, and then I headed into the living room, the guestroom, the sunroom... I LOVE this thing!

Ya know, sometimes it’s the little things that make an expat’s day!


P.S. I posted this little story in an expat group, and some suggested it's just a ceiling fan dusting brush. Well, Mr. Dialect didn't mention ceiling fans - only cobwebs. That might be because Germans don't generally have ceiling fans in their homes. The breeze makes them sick and could lead to early death. "Es zieht!"


P.S.S. When was the last time YOU had a traveling salesman at your door? I love "the old world"! :-)

Posted by Ami im Schwabenland at 00:04