I shouldn't be taking the time to write this blog post - I should be studying. I have three weeks before Week 2 of my Jagdkurs, and after the first one, I have a little better idea what I need to do. The short version is that I need to learn in several weeks everything I didn't learn (about animals, plants, biology, weaponry...) growing up and going to school in Wisconsin.

For any anti-hunters who might be reading this, this journey for me is not about hunting. I cannot imagine a future in which I ever get up at crazy-o-clock in the morning, grab my gun, and go shoot something (and btw, that is so not the way Germans go hunting). I am in no way against hunting - I love meat including venison, wild boar, and some fowl. I just wouldn't trust myself to do it right - Waidgerecht. Besides, I'm going for my Jagdschein because I want to be a Falknerin and help rehabilitate and release injured or sick birds of prey, not so I can hunt.

This is about facing a daunting challenge in a foreign language.

After six days of class - 8:00am to 18:00 (6:00pm) from Monday to Saturday with several breaks here and there - I can honestly say I have never in my life faced a bigger challenge than this. I've raised two kids, but the pain and horror of actual childbirth was over relatively quickly, I did it all in my native language, and there was no three-part test to pass at the end. I moved overseas to begin life as an expat/immigrant, but that was a piece of cake, in part because I could already speak some German. Professionally I have been a teacher, but that came pretty easy to me also and serious challenges were short-lived.

So yeah, the number of times I wondered during that first week "What the actual hell am I doing here?!?!?" was more frequent than I wish it had been.

I was warned. People told me this is no easy thing. And it shouldn't be! There is a lot of Verantwortung - responsibility - with hunting. To prepare for the test there's a lot of reading, a lot of memorizing, and a lot of learning to do. IN GERMAN. I would have a hard time learning this even in English, and the teachers go fast through the material! We are 14 students, and I'm the only foreigner. I wouldn't expect them to slow down just for me, and there wouldn't be time anyway.

Already on the first day, though our teacher was the school director, whom I'd met before, I found myself realizing there was much I didn't understand when it came to the content (Topic: Wildhege, or gamekeeping & forestry). Then on day two the topic was Federwild (wild fowl) with a different teacher, and I learned that there are more ducks than just the Mallard (Stockente) and more geese than the Canadian. Ok, I had read much of the corresponding book in the weeks before class started, but I hadn't started trying to really identify them. One activity was to take the various Präparate and organize them on tables according to which group they belonged to. I felt sorry for my partner. I did learn, though, and can now identify a number of the ducks. The Greifvögel (birds of prey) are less problematic for me, but we only need to know two of those.

As of Wednesday it was "Schluss mit lustig" for me: Waffenkunde (the science/study of weapons). The teacher was impressive and answered every question my classmates threw at him without missing a beat. Would that I could have understood his answers. I suppose he spoke with a bit of an accent or dialect, but it wasn't so strong that I could blame it on that. Basically it comes down to the fact that I know next to nothing about guns, ballistic, caliber, etc. despite all my reading since Easter, so I had little prior knowledge to fall back on. I understood some of what he said when he went over something I'd read and studied, but that was a small portion of the whole.

And I was so proud of myself a few months ago when I finally got the difference between a Büchse (rifle) and a Flinte (shotgun). Idiot.

I'd been afraid of guns before starting to read about how they work - the inner mechanics. Eventually I thought my fear had developed into a respect and interest. But it turns out it is still downright panicky fear. Saturday morning was our first Schießtraining, practice shooting at clay pigeons with a Flinte. 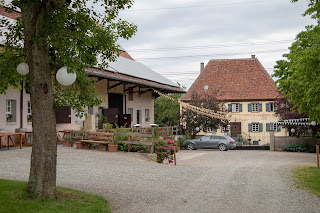 As of  Wednesday I couldn't eat more than a Brötchen/roll or two in the afternoon or evening (I have a nervous stomach even when I'm not nervous, and when I am, I can forget eating), on Friday I had to hold a real - but unloaded - gun for the first time. Our teacher wanted to check our aim, stance, and dominant eye (at least that's what I think he was doing), and I was on high alert just knowing I would have to hold and aim the gun. M asked me that night if I knew what exactly I was afraid of, but I didn't (still don't). Most likely it was not understanding and doing something wrong. By then I was well aware how much I do NOT understand, and I was thinking this is going to be extremely dangerous.

I saw a wonderful story this morning where a girl who didn't want to dive into a pool said loudly "But I'm afraid! I'm so afraid!" An old woman was swimming by, stopped, raised her fist defiantly and said, "So be afraid. And then do it anyway!" I wish I had seen that on Friday night, because that's the attitude I needed.

On Saturday morning when I opened my window, a beautiful Rotmilan flew right over the house, closer to me than I've ever seen one before. I thought briefly that could be a good omen - and a reminder of why I'm putting myself (and my instructor!) through this. Then I drove to the Schießstand (shooting range), hoping to heaven they had a WC.

My stomach was twisted all during the Waffenhandhabung (weapons handling) demonstration, although the instructor was as calm as a Zen master and spoke very clearly. Then it was time to shoot. I had fear and "I don't want to do this!" written all over my face, and one of my classmates tried to reassure me it would be fine. I had no idea how to stand, hold a gun, or aim, but I was able to load a Patrone, say "Hopp!" almost loudly enough for the guy releasing the clay pigeon to do his thing, pull the trigger, open the Kipplaufwaffe and unload the Hülse without killing anyone and without crying.

I shot a total of 29 times, and after 14 my instructor and the Schießstandaufsicht tried to show me how to aim. I did somehow hit three of the pigeons.

One of my young classmates asked if I'd at least enjoyed it. I did not. I was only concentrating on not screwing up. The gun was heavy, despite being a Damenwaffe, and I was not at my physical strongest, having not eaten much in three days. But I did it, and my first interaction with a gun and live ammo is behind me.

I felt rather dejected afterwards, but once back at the school for our afternoon session on furred game, I gradually felt better. Then I drove home and felt better still. On Sunday I watched a few videos about how to stand and aim a shotgun, I read and re-read some more about guns, and M warmed up homemade Hirschgulasch (venison) for dinner.

Several times during the week I acknowledged to myself that I am in way over my head. I should have studied the books I have for several years before signing up for a class. There are just way too many words I don't know - and I mean normal German words, not just the Jägersprache. As an example, the instructor sent us home with a 50-page booklet about safety to read by the time we return. My classmates will be able to read through that during a Kaffeepause. It took me about six hours on Sunday because I had plenty of words to look up and I took notes. It's not enough this time for me to skim over words and say "Ja ja, I get the idea." I have to know this because I will be tested on it.

Still, I am looking forward to Week 2 - despite the fact that we will be going to the shooting range five days of the six. There is an impossible amount of material to learn, and if I spent every waking moment studying between now and July 1st, it would still not be enough.

So then...back to the books.

Posted by Ami im Schwabenland at 22:28