I have really fallen behind again. This is a post I started a few weeks ago, and I'm publishing it now as a sign of life.

What have I been up to lately??

I took the train to Heidelberg for two days in mid-November to meet an old friend from Wisconsin. She runs a study abroad program for German and Swiss students who want to attend school in Wisconsin for a semester or a year, and she, her daughter (who was friends with my daughter when they were young), and a friend were here to interview interested students. Having exchange programs in common we had much to talk about along with catching up in general. Interestingly our programs are very similar except that hers costs €10,500 and ours is free beyond the plane ticket. 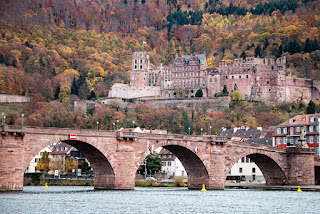 The next day I also met up with fellow midwestern expat blogger Mari. We meandered around town, took the Bergbahn up to the castle, popped in to visit Perkeo, the guardian of the 219,000-liter barrel of wine that resides in the castle, had lunch, and then she dumped me at the Bahnhof for my train ride home. 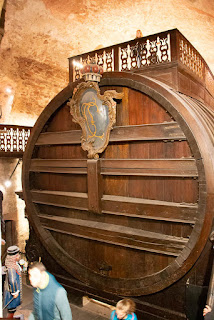 I also met my host mom and sister for coffee in Esslingen, a Syrian friend who likes to meet regularly to speak English, which he needs for his job training and a possible overseas experience in the USA or Canada (I'm pushing for Canada since I'm pretty sure #45's Muslim travel ban is still in effect), my Scottish student who invited me to a performance of Mozart's Requiem, my Schwiegermutter, and two teacher friends of mine. I was unusually social in November!

M and I drove south to attend the last falconry show of the season at Schloß Hornberg, and in so doing met a new Falkner. I chatted with him a bit before the show and told him about my interest in becoming a Falknerin. He encouraged me to contact him and set up a visit to his Falknerei, which I did. M and I spent an afternoon with him and his birds, interacting with the birds we could and photographing the other ones. We each had an eagle on our arm at one point, the smaller Steppenadler for me and the impressive and very heavy Weißkopfseeadler for M.

I've made the exciting leap to Lightroom for organizing and editing my photos, and I now shoot only in RAW. I still have virtually no idea what I'm doing with all those fancy sliders, but I've been watching training videos and taking extensive notes. I have great hope that I will one day be almost as good as M at making good pictures better.

Despite the fact that I thought I would love this book, I dragged myself through H is for Hawk, by Helen Macdonald. I don't know how long I took to read it, but it felt like months. I finally finished it last night.

I've also been reading hunting magazines, my Jägerprüfung book, the local newspaper every day, and everything else that begs to be read instead of H is for Hawk.

Next I'll try a German book about a Falkner in 1184

Mainly emails. I also wrote an advertisement for the chaperone position we have available - to accompany our summer exchange students to my hometown for three weeks. Let me know if you live in the Esslingen area and are curious! (Our Verein pays for your trip.)

I also wrote our Christmas letter and am in the midst of writing cards.

We went to a cooking class a few weeks ago with the theme Wild, or wild game. It wasn't at our usual place, but rather at the VHS (community college). We didn't really learn any new skills, but it was enjoyable and we met some nice people.

On our own, however, we decided to see what we could do with 2.5 kg of Hirschgulasch M had bought from Metro (like Costco). This was a three-day event, and my contribution was clean-up. In the end it was delicious, and we have four leftover portions to help us through the winter. M prepared our taste test in the style of The Taste, a competitive cooking show we like to watch. (Hirsch = stag)


The Weihnachtsmärkte (Christmas markets) have been in full swing, and I have been to the ones in Horb, Esslingen, and Stuttgart. I enjoyed the Chocolate Festival in Tübingen at the beginning of the month, and I can still taste the out-of-season fruit dipped in dripping decadence. 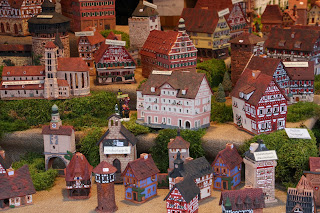 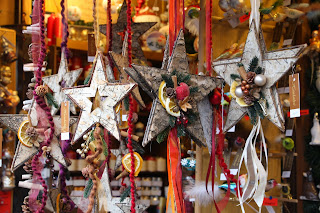 I hope you, dear Readers, have been having a lovely and relaxing December. Don't forget to slow down and breathe, spread kindness, and be mindful.