Judging from a few other blog posts I've read lately, we bloggers who started out a few years ago focusing on the interesting differences between life in Germany and life in the homeland are running out of material. What was at first surprising, shocking, perplexing, frustrating or downright maddening is now just normal. Take this post from nearly four years ago. There's nothing listed there that is even noteworthy to me today.

My musings these days are turning darker, I suppose.

One pointed difference on a significant topic is immigrants and borders. On September 4, 2015 Angela Merkel welcomed the throng of refugees stuck at the Hauptbahnhof in Budapest who were seeking asylum in Europe. She basically tossed the immigration rule book out the window and made a decision in favor of humanity. The road from there has not been easy for her, her government, or for the refugees who have come to Europe, including many of my former students who have become my friends.

Just days ago the president of my homeland had asylum-seekers at the US-Mexican border tear-gassed.

I understand there are no easy answers, but frankly, I prefer the humanitarian approach.


Merkel uttered her now-famous words "Wir schaffen das!" ("We can handle this!"). Where there's a will, there's a way. Thinking positively. How very un-German.

In Nagold this week there is an exhibit of posters sponsored by the Diakonieverband Nördlicher Schwarzwald entitled "Wir schaffen was" ("We are accomplishing something"), a play on Frau Merkel's words. The posters highlight refugees in the area who have made something of themselves, have learned German and found jobs and friends. A student and friend of mine, who was in the main station of Budapest on that September night in 2015, is featured on one of the posters. I am very proud of him! 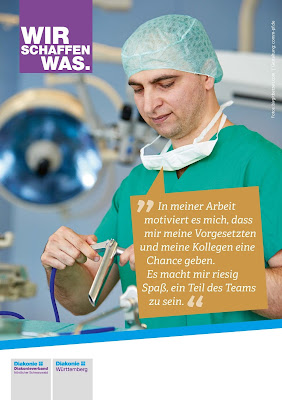 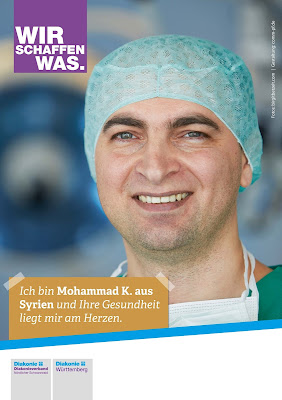 
For a number of reasons, including selfish ones since I have made quite a few friends due to her action, I am glad for Frau Merkel's compassionate approach.

While I'm taking what might be my last shot at comparing life in the USA vs. in Germany, I thought I'd share some numbers I came across just today.

In terms of land area, Germany (357,386 km2) could fit into the USA (9,834,000 km2) 27.5 times. For an enormous country that was once seen as a land of immigrants ("Give me your tired, your poor, your huddled masses..."), the number of refugees and asylum seekers it is willing to accept today is pathetic and embarrassing.

Set aside the argument about illegal vs. legal immigration: How many human beings fleeing war, poverty, inhumane conditions, corruption, and persecution is the United States government willing to allow into this "great" country? 45,000. Since 1980 the limit has been established by the president each year, and #45 chose this historic low for 2018. For a country so rich and prosperous, is that not a bit sad and selfish?

"Charity begins at home. We should focus on our own." There are poor, hungry, and homeless people living in Germany as well, and still Germany accepts multiple times more refugees and asylum seekers than the US each year.

Be honest. The reason is likely more along the lines of "Who cares about them? They look different, they don't talk English so good [sic], and they have strange customs. What if they take the jobs none of us want? What if they move into our neighborhood?! What if they commit crimes? What if they breed? Then there will be more of them, and...OMG...those children will be US citizens!"


But tomorrow evening I will feel more positive. I am going with Mohammad to the opening of the exhibit "Wir schaffen was" where we will listen to a few speeches, meet the photographer and the person in charge of the project, and see the rest of the posters that have been displayed around Nagold. The exhibit will then go on tour, beginning in Stuttgart.

For more information, see this article (in German only).

From the opening on Thursday evening: Posted by Ami im Schwabenland at 20:02