I believe every foreigner living in Germany who writes a blog has written about Mülltrennung - garbage separation. I also wrote a post about this not long after I moved here. If your German is good enough you can find many articles online, such as this one, with instructions on how to do this properly or this one which includes a handy dictionary explaining all important words concerning garbage.

Unless you live here, you would not believe the amount of time that can be spent pondering - and even discussing - the disposal of waste.

Each Landkreis (county) has its own special policies and procedures, so if you have moved to Germany and want to be certain you're doing it right, look up "Mülltrennung" for your county. We live in Landkreis Freudenstadt, which handles some aspects of garbage and recycling differently than Esslingen. We can put meat and bones into our Biomüll, for instance, whereas you can't do that in Esslingen.

This is a tired old topic, but one that keeps coming up again - recycled and reused, if you will. This morning I found myself perusing the 67-page booklet that arrived last week explaining the details of Mülltrennung for our area and then reading an article about it in the January issue of Deutsch Perfekt.

Seriously - this is what it has come to on a quiet Saturday morning. I am reading a booklet about separating garbage.
Why would I do such a thing? Why would anyone? Our county - and probably every county in Germany - publishes and mails to each household a printed annual guide for this business, hoping residents will read it and stop screwing up the system. We should dutifully research what refuse goes where, and when bins will be picked up. How on earth is anyone supposed to keep track of that?
Spoiler alert: There's an app for that.

M's phone dings once a month to remind him to put out whatever is being picked up in the morning. You read that right - once a month. Ok, Biomüll (compostable scraps) gets picked up every two weeks, and I recently read that in big cities it's all collected more often.

The magazine pictured above is Deutsch Perfekt. It's a brilliant magazine aimed at learners of German and includes a regular column called "Wie Deutschland funktioniert" (How Germany works"). As I mentioned, January's column is about separating garbage and recycling, and I read it with enthusiasm. The writer makes the claim that Germans love recycling and consider themselves Weltmeister (world champions) at it.

And yet still there are those who don't get it. Case in point:


Those folks were just dicks. They showed up with bags of empty bottles but found the containers full to overflowing. What they were supposed to have done was take their bottles away, find another container, whatever - but not just stack them on top! They probably also committed their crime under the cover of darkness, ignoring the strict opening hours of the containers to restrict noise during the night and on Sundays, since no one would want to be caught in broad daylight being a Müll-Ferkel.
When guests stay with us for just a day or three, the garbage separation business doesn't usually come up. My dad stayed with us for more than three weeks in the spring of 2017, though, and that meant a lesson on where to toss which garbage along with follow-up reminders. Honestly, it's nearly embarassing to me to do this to people - but since our space for garbage is limited, we need to do this right.

In extreme cases, there are even penalties for improperly disposing of garbage! If plastic or metal shows up in our Biomüll, we get a yellow card (soccer reference) warning. If it happens again we get a red card (also called the Arschkarte, or "ass card" in soccer), which means they will no longer collect our stinking bin of decomposing kitchen scraps. We then have to take it ourselves to the dump (no, it does not fit into the car upright, and for obvious reasons we wouldn't load it in sideways) and pay them to take it.

So...yeah. This shit needs to be taken seriously. 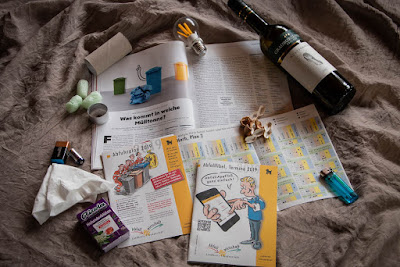 In the above photo you see many of the typical types of garbage and recycling a normal household deals with from day to day. All of what's there would go into two different bins in Wisconsin (USA): garbage for the landfill or recycling (paper, glass, plastic, all mixed together). But here in Germany... You don't get to claim to be Weltmeister at Mülltrennung just by throwing everything into one of two bins. The above items require seven different recepticles. Seven.

We'll start in the upper left. This is the little bugger I remember having to tell my dad did not belong in the tiny bathroom garbage can. Poor guy - he took it upon himself to change the TP roll himself, which apparently many boys and men can't be bothered to do, and I then had to tell him he was doing it wrong. Ugh. (Sorry, Dad!) Anyway, the empty TP tube belongs in the Altpapier (paper/cardboard bin), as does the booklet, when I'm finished reading it at the end of the year when the 2020 edition arrives, and the magazine.

The lightbulb needs to be brought to the special lightbulb recepticle at either the local dump or at the entrance of our supermarket.

I haul the empty wine bottle and its companions to the Glascontainer (glass recycling containers), and since it's not exactly brown and not exactly green, it goes in the green container - as does blue glass and yellow glass (don't ask, just accept). Drinking glasses do not go into the white/clear glass container, though - that's a special kind of glass and goes in the Restmüll (see below).

Left of the bottle are nut shells, representing kitchen scraps. Fruit & vegetable peels, apple cores, egg shells, meat scraps & bones, coffee grounds, etc. - just nothing liquid or soupy - goes into the brown Biomülltonne wrapped in newspaper. In the summer this bin stinks to high heaven, which brings flies and maggots. In the winter if it's too moist in the bin, whatever went in first freezes to the bottom and doesn't come loose when it's emptied. Fun times.

The lighter: I have no idea where the empty lighter goes. It's plastic, it's metal, it's liquid if it's not totally empty...We have a bag full of them stashed in a closet waiting for further instructions. I just asked M, and he said they probably go into the Restmüll (everything that doesn't belong somewhere else goes in here - it's our smallest bin), but not all of those at once. He means to toss 2 or 3 into the Restmüll every month when it's picked up, but he always forgets. That bag of lighters will probably still be there when we die.

In the bottom left of the photo we have a plastic-coated box of old Ricola lozenges. This requires three bins: the plastic wrapping goes into the gelbe Sack ("yellow sack" - stay tuned), the cardboard box goes into the Altpapier, and the expired cough drops go into the Biomüll.

The dirty tissue (please note: it's not actually been used) goes into the Restmüll or the Biomüll. Sometimes (though seldom) you have options, isn't that nice?

The batteries need to be taken to the dump, which is open for a few hours on Friday afternoons and Saturday mornings, or to the battery recepticle at our supermarket. We have a bag of these in a corner of the office, too, which we keep forgetting.

Lastly, between the batteries and the TP roll, you see a burned-out tea candle and styrofoam packaging peanuts. Those, along with almost all plastics and aluminium, lids to jars and bottles, and empty plastic bottles that can't be returned for Pfand (deposit) go into the gelbe Sack. Unlike with all the other types of garbage, we are not limited to a certain amount each month. We can put as many of these sacks out on pick-up day as we want. Do note, though, that not all areas of Germany have this gelbe Sack. I learned that from the Deutsch Perfekt article today.


Amazingly, we get these yellow sacks for free! Once a year the garbage guys put one roll of yellow sacks onto our garbage bin after they've emptied it. In apartment houses they place them next to the front door. Last week when I was at my Schwiegermutter's place, a pile of them - one for each household - was lying on the ground outside the front door. She scooped them all up "before they get pinched" and put them inside the locked door for residents to pick up.

I'm sure this all sounds complicated, and believe me, it is. But it's also just part of life in the Schwabenland. One becomes mindful of waste by living here, and most people make a conscious effort to produce as little waste as possible. We have things still in our basement (like the old sun room curtains, which we replaced four years ago with blinds, wire hangers ["Mommy Dearest," anyone?], and kitchen gadgets we don't need) because we don't know how to dispose of them!

A student of mine once called me pedantic. Friends have called me nervous and finicky. More than enough times I have heard "Relax! Let it go! It's not that big a deal!" And none of that was about sorting garbage. I can just imagine what any of those people would say if they stayed with us for more than three days and had to listen to my garbage-sorting instructions.

My parents are coming for about a week in Spring and my kids are probably coming for about 10 days next December for an early Christmas. In the event that they read this blog post to the end...

Please forgive me! It's not me, it's Swabia!

P.S. The EU has just banned the production of disposable plastic items such as straws, plastic plates, cups and cutlery, balloons, and plastic bags. This will be inconvenient at times, but I find it an excellent move. Why? Look at the last two photos in this article for a start.