We recently returned from our 6th trip together to Scotland, and I really wasn't sure where I wanted to start with blog posts. I've written quite a lot about our travels to Scotland and the Isle of Mull, after all, and some of what we do and experience there is not new. Then I came across this post from fellow expat travel blogger, Camila, who lives in Scotland but traveled recently to Germany! She collected her random observations about her time in Germany, and I thought that would be a good way to start about our trip. Thanks for the idea, Camila!


So here we go with my random observations, thoughts, and lessons learned from our most recent trip to Scotland! 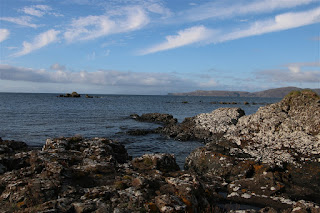 Admittedly we do like to travel to familiar places, which is why we keep returning to Mull and Glengorm. We have enjoyed other areas of Scotland - parts of the highlands, Glencoe, Edinburgh, the Trossachs, Loch Ness, the Jacobite steam train to Mallaig - but somehow we always end up saying to each other, "Well, it wasn't Mull, but it was very nice." So I think we'll keep returning until we have seen all we want to see and walked all the walks we can on the island. So far we've got the north fairly well covered, and after a few more walks there we'll explore central Mull a bit more.

Is there a place you keep returning to for holidays, or do you prefer to seek out new and unfamiliar places?

Any random thoughts on Scotland?

Posted by Ami im Schwabenland at 15:35