In the months leading up to our week on the Isle of Mull, we joined the Facebook group "Scotland from the Roadside." Members there post beautiful photos from all over Scotland - scenery, wildlife, crowded or early morning city streets, mountains, waterfalls, and birds of prey. The folks and their photos have been an inspiration to us, and we had visions of capturing wild birds with our DSLR cameras and fancy lenses.

Photos like the above are what I had in mind - a Seeadler (White-tailed eagle) having just caught his dinner! This is not one of our photos, however. Ryan Wemyss is a talented photographer who frequently posts photos of beautiful Rotmilane (Red kites) and Seeadler - the latter from Mull!

Or how about this one? Again a Seeadler soaring majestically in uncertain skies...

Here's my first attempt. It's not an eagle, but a Mäusebussard (common buzzard).

Uhm, so...yeah. Not quite what I had in mind. Undeterred, we set out as often as we could, content with buzzards but hoping we'd see eagles. Mull is called "Eagle Island," after all!

To give you an idea of the wing span of these Greifvögel (birds of prey), we include this photo from inside Glengorm's Nature Center (next to the coffee shop). The Seeadler's wingspan is longer than mine and longer than M is tall! And when you compare the size of the Seeadler and the Mäusebussard, it's hard to imagine mixing up the two when you see them - but when they're soaring in the sky it's hard to judge how large they are. 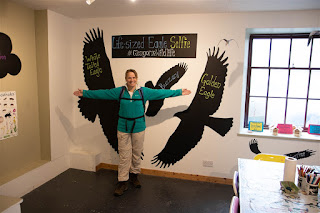 I also picked up some new books and a laminated pamphlet in the bookshop in Tobermory to take on our walks to help us identify the birds we hoped to see.

We ventured out to Glengorm's nature hide on Loch Mingary, a sea loch in the north of Mull. Not long after we got settled, M noticed a large bird fly into the trees. I grabbed my binoculars and he set up the tripod. Sure enough, two white-tailed eagles were sitting together on the same branch! They were at such a distance that we weren't sure at first they were eagles, but when they flew off - about an hour later - it was clear. 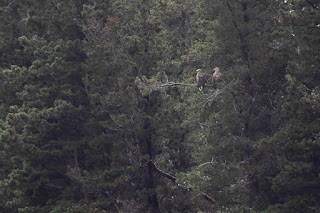 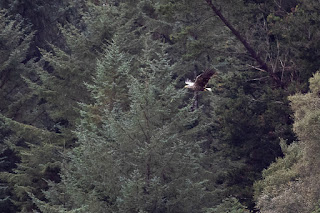 I was rather pleased that we were able to see eagles on our own rather than on a tour with a local and/or wildlife expert pointing them out to us. We did book an outing with Mull Eagle Watch, which we enjoyed. We were actually further from the birds than on Loch Mingary, so I won't include the photos we have. We did learn quite a bit from the ranger, Meryl, and we were glad to have the opportunity to visit their hide as well. She had a good scope, so we were able to see the two eagles, Hope and Star, clearly.

But seriously, how do we get photos like Ryan's?? We could retire, move to the island, and spend every day on the coastline of Loch Na Keal, where some of the eagles hunt. Not realistic. We could buy wellies and wetsuits and try to get closer to the birds when we see them at Loch Mingary, but we do not want to disturb them! So also no. We could spend €13,000 on a more powerful lens, but I wouldn't be able to lift it, and if I fell with it into a bog I'd be lost forever.

I eventually found the answer. I contacted Ryan to ask what camera equipment he uses (and to get his permission to use a photo or two for this post). It's not all that different from ours. I also found out from the Facebook group that we can book a boat tour ("Oh no, not again") with Martin Keivers of Mull Charters. He knows where the eagles spend some of their time, and it is possible, if the tour is timed right, that we might see the eagles hunting for fish rather than just sitting in trees. Sounds good!

I really, really don't like boats. Next to airplanes, they're my least favorite method of transportation. I like my feet on firm and solid ground. Even a bog will do if it must, but water or air, no thank you! If you want to fully explore the beauty of the Scottish islands, however, you need to get your ass on a boat. I've been to Iona, Staffa, and Lunga on two different trips and survived. So, next year we'll do this. To see the eagles more closely and to get the photos that I have in my mind.

On our last day on the island we returned to the hide on Loch Mingary. Skipping to the third of our nearly three hours there (we are very patient when we know what we want), I spied a suspicious lump out near the coast. Here: 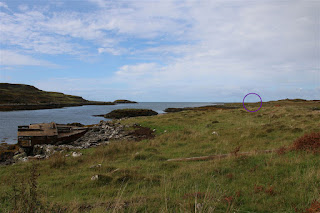 That is basically what I saw with my naked eye, but my binoculars helped. There was clearly a large bird, and as another flew in we were able to see that there were actually four there! I don't think adult eagles hang out together, so we guessed they were a family. 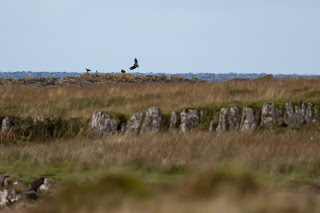 No kidding, one by one three of them flew from the coast, pretty much right over the hide. I was breathless. The first two were clearly - by now we're such experts... - juveniles. We'd learned from Meryl that juvenile white-tailed eagles don't have white tails (and juvenile golden eagles DO!).

Then one of the adults flew overhead as well, and circled a few times. This is what I meant in an earlier post when I said that Scotland and its wildlife will reward those who are patient. You can't expect to spend 10 minutes in a hide and expect to see the beauty and wonder of this place.

I am so lucky that M has always been interested in photography and that his interest in Greifvögel has grown with mine. We have been to Mull six times including last year and have photographed many bits of the northern part, but we were never even slightly interested in birds of prey until this year. Yet he is willing to tromp through forests, bogs, and rivers carrying his fully-laden camera backpack and tripod just in case we'll see an eagle, a Turmfalke (kestrel), or even buzzards.

Our photos may not yet be at the quality of Ryan's, but we're not dissatisified with our efforts, especially since we saw them alone without help from a wildlife expert. And M is looking forward to a boat trip next year to get even closer to these beautiful birds. I know I'll enjoy it as well, once I get over the whole "being on a boat in the ocean" thing.

Posted by Ami im Schwabenland at 21:11