("There will always be people who cherish the fascination of taming wild creatures, in order to give them their freedom again and again." ~Horst Stern)

One of the many highlights during our recent trip to Scotland was an afternoon with Paul Finnigan of Finn Falconry. Readers who have been with me for the last year know of my growing interest in Greifvögel (birds of prey) and Eulen (owls), especially Steinkäuze. The more I learn, the more interested I become. M is equally fascinated by these majestic creatures, and since we're also both into hobby photography, the two combine well into activities we enjoy together. An upcoming post will feature the wild birds we saw on our own while on Mull.

Paul is based in Oban, but he offers Hawk Walks, a 2- or 3-hour Falconry Experience, and much more from the Inverawe Country Park. We signed on for the 3-hour experience, and are ever so glad we did.

During the first two hours Paul gave us loads of information about falconry and his birds while handling them and allowing us to handle and photograph them as well. He's got eight birds and owls, and the three who accompanied him that day were Freya, a Gyr-Saker falcon (pictured above), Khalifa, a Barbary falcon, and Albus, a Harris hawk.

For anyone who thinks a bird is a bird and they don't have personalities, I challenge you to spend a few hours with these three characters - and their human.

Freya is young (ca. 8 months), is new to Paul's team, and is still learning the drill, so after she flies around, egged on by the Federspiel (lure), and lands on it, she "mantels" and can only be enticed off the lure by Paul. Manteln is what a bird does when its kill is threatened - she spreads her wings over it as if to say, "MINE!! Mine-mine-mine-MINE!!" Fair enough - she's the one who had to work for it! She hasn't learned yet that her kill is safe because we humans really don't want the raw quail she's devouring.

She's also a very messy eater, getting blood all over her chest and feet and spitting feathers everywhere, but she's a ham for the camera and absolutely beautiful.

Paul told us that falcons can swivel their heads around similarly to owls - roughly 270°, as Freya is demonstrating above so nicely.

She's a hybrid, a cross between a Gyrfalcon and a Saker falcon. I've read that Gyrfalcons are testy and unforgiving - make a mistake with them and they hold a grudge for weeks - but by mixing the breeds it's possible that the offspring takes on the positive qualities of both types. Paul indicated this seemed to be the case for Freya.
Then there's Khalifa. He's older and more experienced than Freya, so after he flies he's ok being called back to the glove by one of us silly tourists. Paul handed me a raw chicken leg from Lidl, and after some coaxing, Khalifa left the Federspiel and flew up to my glove to tear apart the tidbit I held onto tightly. He's strong for such a little bugger!

Khalifa is a Barbary falcon, which is a bit smaller than a Wanderfalke (peregrine). He flew swiftly and gracefully and was hard to capture on film in flight! Naturally I spent my time playing with the birds, having even left my camera in the car, while M caught what he could. He's better with the camera anyway - and took hundreds of photos that afternoon! 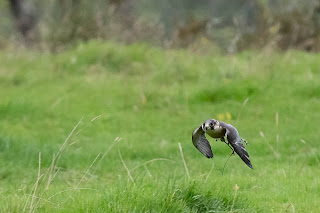 We spent the last hour of the afternoon with Albus the Harris hawk. Perhaps because we spent the most time with him, he was my favorite (in the way that you have three children you adore, but that one bakes you pie and calls you once a week). He is rather fresh to this job, having spent the first 2.5 years of his life with his family unit, even helping to raise and feed his younger siblings! Harris hawks live in family groups, which is unique in the world of Greifvögel. Albus had only been doing this "hawk walk" business for a week when we arrived, so we were treated to both "newbie" mistakes and veteran moves. I love this gorgeous bird!

We walked through a wood and around a wee loch, and it rained on and off the whole time. Harris Hawks (called Wüstenbussarde in German) aren't waterproof, and when they get soaked through, they don't fly well or happily. They're native to Arizona and the hot and dry regions south of there, and they soak up rain like a sponge. What this meant was that I got to carry him for the last 10 minutes of our "Hawk Walk," after he was rewarded with a Lidl chicken leg. I loved it. The hawk walk, not the chicken leg.

Paul gave us a different answer to the question "Why do the birds come back to you, when they are free to fly wherever they want to?" than we have heard from other Falkner. He said the birds don't need him for food - they are perfectly capable of hunting for themselves. In fact one of his Harris hawks did fly off and was gone for several weeks! She returned every now and then to their station at the Inverawe Country Park to see what they were up to, but she came back on her own terms after she presumably got tired of the wild life. He tries to create a bond with the birds, spending time with and flying them every day (when they're not in the Mauser - molting - which makes them vulnerable). It's the Verbindung - connection - and partnership to the Falkner that returns them to the glove, Federspiel, Sprenkel, etc. It's not just about the raw quail or chicken buffet. From what I have seen with the Falkner in our area, it seems quite believable that this is the case. They clearly care about their birds, and I like to think the birds feel a bond with them as well.

We booked our falconer experience back in March, and we learned at the start of the month that he was booked all through September - so it was good we'd planned ahead! If you think you'd be interested in a few hours with Paul and his beautiful Greifvögel, and trust me - it's an unforgettable experience! - plan ahead and book early. 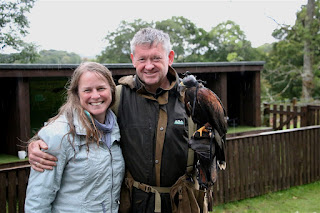