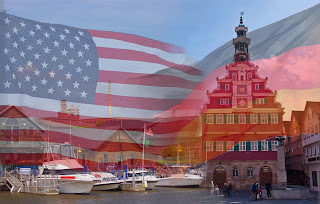 I have written before about the exchange program between Esslingen, Germany and Sheboygan, Wisconsin USA - here, here, and here, for example.

This exchange program means the world to me. I am who I am because of it. My husband and I met through it 32 years ago. This past Wednesday was our 12th anniversary (we were friends for 20 years first!). I’d planned to write this blog post that day to celebrate both the exchange program and our anniversary, but as sometimes happens, the day had other plans for me.

My hometown of Sheboygan and my favorite town in the world, Esslingen, are sister cities (Partnerstädte). The exchange program began in 1970, and we have had around 300 students participate from both towns in the years since then. My year was 1986, and M participated a couple of years later. For me the experience was life-changing.

It's funny how, nearing age 50, you can look back and see where your seemingly insignificant choices influenced the rest of your life.

[And if I had not met my husband, I would not be living very happily with him in Germany with enough free time to have given back to the exchange program! That's another, more private branch of this story.]


As it turns out, there have been very few decisions during my life that weren’t in some way related to the exchange or stemming from it. I chose my daughter’s name because it is my exchange partner’s name, and I made sure my son’s name was also easily pronounced in both English and German. I exposed my kids to German as they were growing up by reading German children's books to them and teaching them German children's songs. In 2008 the kids and I welcomed a girl from Esslingen into our home for the summer (she was my co-chaperone on our trip this year to Berlin!). Through art and décor, Esslingen has been in every room of every house I have ever owned.

I will always be grateful to the organizations and individuals that brought these two towns together and gave life to the exchange program. I owe my profession, many life choices, my marriage, and much of my happiness to this exchange.