I’ve seen and heard some conversations recently and have read many articles and comments about the current situation at the U.S.-Mexican border. I learned one thing: I am wasting my breath. I don’t know what to say to someone who can think it’s acceptable to willfully allow children - any children - to suffer. I don’t know how to explain to someone why we human beings should care about other people – including those who are not like us. 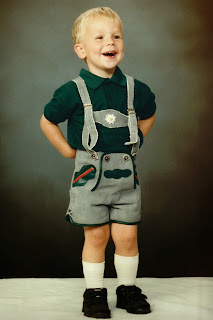 This is my son, Alex. In this photo he is about 3 years old. He was born into a privileged, loving white family that never needed to flee from anywhere for any reason. Our neighborhood was safe, and he didn’t have to fear that gang members or drug lords would destroy his youthful joy. We provided for him, watched over him, and filled his room with books and toys. If he ever had trouble with other children, it was not because of the color of his skin, where he came from, or how poor his parents were. He was never ripped from my arms and put into a cage for an unknown period of time. He sometimes cried when I went to work and left him at a daycare or with a babysitter. His babysitter was often one of his grandparents, and when he was sad, scared, or lonely they could pick him up and comfort him with a hug.

I can’t look at what’s happening with these immigrant children without thinking about Alex when he was the tender age of many of those children sleeping for days or weeks on floor mats in metal cages. I can't help but wonder how he would have felt and how long he would have cried.

To those who are saying, „It’s the parents‘ fault! Why don’t they just apply to come into the country legally?” – I imagine it is fair for me to assume you have never had to flee your home or country due to violence, war or poverty. Lucky you. There are 68.5 million people auf der Flucht (forcibly displaced) in the world today (today, which happens to be World Refugee Day). I hope you recognize the blessing and privilege of not being one of them.

I would like to ask a parent who has crossed or tried to cross the border illegally why he or she didn’t use the proper and legal channels. There must be reasons. I don’t think any parent would weigh the two options and casually decide, “Ach, let’s take the illegal path. It’ll be so much more fun. This journey out of poverty/violence/war hasn’t been dangerous or risky enough yet.”

To those who say “most of those kids aren’t even with their parents; criminals and traffickers are using the children to get across the border pretending to be a family” (one person even wrote that we are protecting these children by taking them away from the adults they’re with) – I understand this happens. I think it’s base to pretend, though, to suddenly care about human trafficking or slavery, which goes on every single day all over this world, including in the U.S. Those who actually care about human trafficking and slavery should do something about it, like Urmila Chaudhary is doing, rather than using the “But...traffickers!” excuse to justify cruelty toward immigrant children.


To those who ask “Well, what should we do instead?!” I say for starters, what we were doing before Jeff Sessions put this policy into action. “It wasn’t working!” they say? Of course it wasn’t working. Is there any country in the world that has solved the problem of immigrants crossing borders illegally – short of shooting them dead, as during the DDR (East Germany) years? Even that didn’t work. People who are desperate for a better life will risk anything, even death, to find security.

What should we do instead? Act with compassion. Keep these little children with the family members they came with, while continuing to look for criminals and traffickers who use the children. To separate all these children from the adults they are traveling with because some of them might be bad people is, for me, deplorable.

To U.S. Attorney General Jeff Sessions, who told a roomful of people the other day that these children are separated from their parents for “a very short period of time” and then defined that as “a week or two or three,” I’ll say he should watch his grandchildren (if he has any) at age 4 or 5 or 6 be taken away from their parents, put into a cage to sleep on a mat with a thermal blanket but no pillow, and see how that goes for “a week or two or three.”

From a CNN article: “UNICEF and UNHCR assert that all children on the move, no matter why or how they were uprooted, should receive the same care and compassion as any other child. Children are first and foremost children -- and regardless of their nationality, their legal status, or that of their parents, their welfare and rights must be at the center of our actions.”  Fitting, isn't it, that the U.S. left the UN Human Rights Council yesterday?

For those who parrot Jeff Sessions and say “American citizens that are jailed do not take their children to jail with them,” I’d like to remind them that crossing the border illegally wasn’t a federal misdemeanor requiring jail time until #45 and his gang made it so*. These parents haven’t killed anyone or caused bodily harm, they haven’t stolen anything, and they haven’t committed perjury or treason. They are being thrown in jail for seeking a better life for themselves and their children. Since there is no plan for reuniting the immigrant families after the parents’ incarceration is over and the parents often have no idea where their children have been sent, this is not the same as a citizen going to jail. A person in jail knows where his or her children are and is able to communicate with them as long as family members on the outside don’t take measures to prevent that.

*Edit: I read recently in a CNN article, which I now can't find, that it has been a federal misdemeanor for some time to cross the border illegally, but that past administrations have gone easy on the immigrants and not been strong about enforcing this.

The idea of not punishing children because a parent of theirs is in prison is not foreign or new. At my school in Wisconsin each year the students and teachers participated in a project called “Angel Tree,” which I just found out is a worldwide organization. Each class was assigned one child whose father or mother was in a Wisconsin prison. We bought clothes and a toy or two for the child, wrapped the gifts, and on the gift tag was the name of the incarcerated parent – no reference to our school or “Angel Tree.” As far as the child knew, he received a few Christmas presents from his parent even though he/she was in prison.

To those who are saying it’s ok to store these immigrant children in cages because their parents committed a crime, I’m sorry, I disagree. If our government can find space to cage children and jail their parents, then they can find space for family detention centers to keep the families together while the now-criminal case (it used to be civil) is processed.

I know my words will have no effect, and yet I write anyway because I believe silence is approval or complicity.

I know many of these people are crossing the border illegally. I know there are some thugs and criminals among them. I have heard all the arguments for why this policy is unfortunate but justified (in their view), and still I choose compassion.

"The opposite of love is not hate, it is indifference."  ~Eli Wiesel

I don’t have all the answers. But I cannot understand someone who says tearing children away from their parents and putting them in cages is acceptable. Government-sanctioned cruelty. Look what we have become. We have elected a government who is proud and unapologetic of this action and refuses to end it, and we have among us many who defend and applaud the cruelty.

I hope this issue doesn’t fade away without getting solved. I hope those opposed keep raising their voices and hounding their representatives* until the child cages disappear and a different solution is found that allows families seeking shelter to stay together. I hope somebody will help these children and families – help them as if they were children from white middle-class families.

Thanks to a friend of mine, I know there is a list of organizations who are mobilizing to help.
And thanks to M, I came to this article, which addresses most of the issues much better than I have in a very reasonable and balanced tone.

*As one of approximately 9 million U.S. citizens living abroad, I have no representative in Congress that I am aware of. I contacted the [Republican] representatives I would have had based on my last address in Wisconsin and my parents’ address, but all I got was a staffer’s thank-you and spam from the reps for the next year or so.

Posted by Ami im Schwabenland at 20:15

Email ThisBlogThis!Share to TwitterShare to FacebookShare to Pinterest
Labels: current events, Off topic