The Joy of Flying

Just kidding. This post is about Flugangst - flight fear.

I am not, however, looking forward to the flight, to say the very least.

It's not the fact that I'll have to scrunch myself into a spot fit only for small children in a straight jacket, or the length of the long flight from Zürich to Chicago (8 hours? 10? I don't know; I didn't bother looking.), or the fact that the asshole passenger in front of me will recline his seatback whether he's sleeping or not and will flash me the side eye when I ask him nicely if he would mind putting his seatback up during meals, or the diabolically filthy stench of the airplane toilets, or the other passengers who will annoy me in a thousand ways, beginning with speaking.

It's mainly the fact that I never took physics class and simply do not believe that tin can of a deathtrap with wings should be able to do what it does. I do not assume I am going to make it to the other side alive. I'm glad every time I do, and I'm not kidding when I say that the first thing I do after I pry my claws from the arm rests after landing and feel the plane begin to slow down (the first sign to me, after a multi-hour flight, that we might make it) is to whisper "Thank you" - to the pilot, God, mother nature...whomever I think might be listening.

I was not always afraid to fly. My dad had his pilot's license when I was a teen, and he took me on several flights in a 4-seater over our town, and on one flight over Lake Michigan to a wedding. I flew to Germany for the first time at age 17 and thought the feeling of taking off was really cool. I have flown back and forth between Europe and Chicago 31 times before this, a few times from Wisconsin to Florida in my earlier years, and since moving to Germany I've flown to Scotland and Berlin twice, Vienna, and Rome. So it's not like I'm an inexperienced flyer. 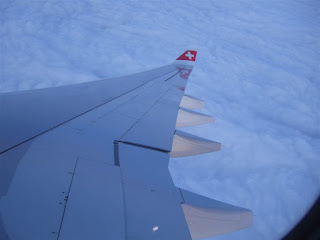 The above photo was taken during one of those death-defying turns when I do not understand why the plane doesn't keep flipping and just fall out of the sky.

Flying is a necessary evil for someone who lives six time zones and an ocean away from her family. And evil it is. If God had meant us to fly, He would have made us birds.

I don't know when the fear started, but it was definitely after I had kids. From that point on I had two someones who needed me, and I started to take mortality a bit more seriously. By now I'm just enjoying life so completely that I'm not ready for it to be done. I know I have no control over that moment. But I have far less control in a frickin' airplane! Frankly, I prefer the illusion of having at least a little control.

I always hope there are no children near me when I fly, not only because children on airplanes are usually even worse than their parents with regard to behavior and noise, but because I don't want to be responsible for the expansion of their vocabulary while they listen to me curse like a drunken sailor whenever there is the slightest turbulence. Seriously, one thump, and the "Fuck!" is out before I can bite it back. The repertoire of colorful language expands with each thump, bump, and air pocket plunge. I only hope the Almighty believes me when I look heavenward and offer a terrified apology for misusing His holy name before beginning anew.

Flying to and from Scotland with M is generally less problematic. The flights are short, and he's with me. "If we go, at least we go together, Luv!" as his English grandmother used to say to her husband.

Statistics only help when my loved ones are flying. I track their flights and am not afraid they won't make it. I get it that flying is statistically safer than driving - perhaps especially in our area, where I swear there is a fatal or near-fatal automobile, truck, or motorcycle accident nearly every week.

Plane crash dreams hardly even freak me out anymore because they're so common. Usually I'm watching the plane that crashes, but in the latest one from a few weeks ago, I was on the plane. I remember thinking, as the plane tipped like at the top of a rollar coaster drop, "Well, that's it then. I'm surprised I feel so calm."

Don't worry if you ever have to sit next to me on an overseas flight. Except for the barrage of profanity during turbulence and the shimmies and shakes of take-off and landing, I generally try to pretend I'm not terrified.

A few years ago I booked a flight for my dad and M with a pilot in the Wisconsin town where I then lived. The pilot was a former student of mine and the son of a good friend! The flight was over that town and then 45 miles east to fly over my hometown. I was not able to decide until the moment of boarding whether I would accompany them or not. My mom, who stayed on the ground because there was only room for four, captured my moment of indecision after peeking into the tiny box I'd be sitting in:
I did go, and I'm glad I did, though the men enjoyed it more. They got some great photos, but with every turn I buried my face in M's shoulder, and I think I bit him once.

If it weren't for the take-off, the landing, and the turbulence, I'd be fine with flying. I actually also hate being on boats and would never in my life go on an ocean cruise. I simply prefer my feet on firm ground.

So for the three people I'll see who are still reading my blog, know that my restrained enthusiasm isn't because I don't want to come to the States or see you. It's because I am terrified to fly. The only thought that has ever helped me calm down a little during turbulence was, "At the moment, we're not crashing. So everything right now is actually ok."

I thought perhaps writing this blog post would help "get it out" and untie the knot in my stomach, but it didn't. Darn.