The pause in my blogging was due to a trip to the homeland for my son's college graduation. I didn't bring my laptop and wouldn't have had time for blogging anyway. Now I'm back home and gearing up for another month of reading along with normal duties and responsibilities.

I made quite good progress on my 2018 reading list, and added Elisabeth to the mix and am halfway through that one. It's a bit daunting at 600 pages in German, but I am enjoying it immensely. I just didn't take it to the U.S. with me because it is too thick, and of course in the mean time I have been assailed by four other books that are begging to be read.

These are the books that are on my pile now (along with Elisabeth): 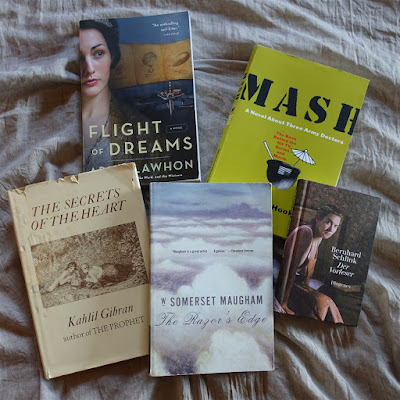 I've wanted to read this book for a while - before or instead of watching the movie - and I stumbled upon it not long before leaving for the States. The original title is The Boy in the Striped Pajamas. Two nine-year-old boys meet and become friends, but they are separated by a fence and can't actually play together. The reader understands the situation, but Bruno, whose father has been tranferred to "Aus-Wisch" as the head commander, does not. Schmuel, Bruno's young Jewish friend, tells him only enough about life on his side of the fence to be understood by the reader, and eventually Bruno's curiosity gets the better of him.

I ordered this book because of a reading challenge I read about in which you read one book published in each year of your life. That made me wonder what was published in 1968, so I looked up a list. I came to MASH and ordered it - to be delivered to my parents' house. It's a quick read - I started it the day after I returned home and finished it the next day. I enjoyed it (except for the long, boring football game chapter, but apparently that's a legend among fans who know the pilot movie), though I agree with some of the Goodreads reviews I read: Hooker was not a great writer. Apparently he was a surgeon with a great idea. And what grew out of his novel was absolute genius.

M and I turned the house upside down this evening looking for his DVDs of the series, which we haven't seen since our move but knew we had. We watched the first episode of the series, and as I type this we are watching the pilot movie. Although I only gave the book 3 stars of 5, I now highly recommend it to those familiar with the movie and the early episodes of the series. Do you know Father Mulcahey's original nickname? Do you know why John McIntyre's nickname is Trapper? Did you catch Hawkeye's first friend before Trapper John? He's in the book and the pilot, but didn't make it into the series.

This is a novel about the Hindenburg disaster in 1937. I understand it's historical fiction and therefore not to be taken literally, but I am still looking forward to learning more about it. I always read up on the actual facts, as far as they are known, while I'm reading a book like this.

My friend from Nagold recommended this book to me, and I happened upon it in a nice travel-size edition in the Nagold bookstore after we last met. I saw the film years ago but only remember the general premise (English title: The Reader). This is a perfect-sized book to take to Berlin when I'm chaperoning the Sheboygan exchange students, because I won't have any time to read anyway but it can fit in a small pocket.

The Secrets of the Heart, by Kahlil Gibran

I pinched this one from a bag in my parents' basement that had other books in it that were clearly mine. I don't remember this particular book, but Gibran is one of my favorite writers. I read part of it on the plane on my way home and didn't love it only because I wanted to be "wow-ed" like I was when I read the Prophet. I will finish reading it because Gibran's writing is mystical and wonderful.

This is one of my all-time favorite books, and it came back to me during my trip to Wisconsin because I met a former student who wanted to give it to me. She graduated in 2006 and so I haven't seen her in 12 years, but she has an amazing memory and knew that I loved this book. When she heard I no longer possessed it (I can't imagine why I wouldn't have brought that over when I moved), she found me a copy and asked to meet. We had a lovely chat, and although I've read this book twice already, I am looking forward to my old friend again.

Incidentally, that student of mine is the same one I mentioned in the blog post above about the Prophet.

So, then, what are you reading these days?

Posted by Ami im Schwabenland at 22:20