As I have written before, southern Germany has been historically predominantly Catholic. Although I don't know a lot of Germans who regularly attend church, Christianity is deeply imbedded in the culture and way of life here. Every town I know of still holds its Catholic or Protestant identity, and the locals know which towns are which. Eutingen is Catholic. Mühlen, 3 km away, is Protestant. Freudenstadt is Protestant as is Esslingen. Horb is Catholic.

This does not mean that Catholics are not welcome in Protestant towns - just that, in most cases, during the Reformation and especially the 30 Years' War (1618-1648), it was decided through battles, bribes, or the citizens' preference which religion the town would support.

The point of this post is not a lesson in religious history, however. The importance of the fact that southern Germany is more Catholic than Protestant is that we have, in Baden-Württemberg, more public holidays connected to religion than the poor saps in the north. Up there my birthday is not a holiday, but in the south it is. Ok, it's not a holiday because it's my birthday, but because it's Allerheiligen (All Saints' Day). There's at least one other holiday here that they don't have up north, but I keep forgetting which one that is. Fronleichnam (Corpus Christi), perhaps. Most schools around us also have a week off during the nuttiness of Fasnet/Fasching, which is unusual north of Köln. Oh, and of course Dreikönigstag is not a holiday up there either! 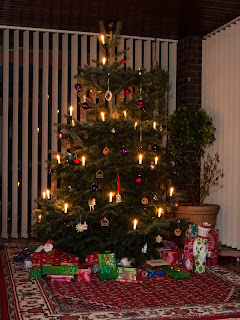 Right now in the U.S., Christmas is over. School resumes tomorrow, and it would have started yesterday - on January 2nd - if it hadn't been a Saturday. On December 26th I saw quite a few Facebook posts beginning with "Now that Christmas is over..."  Here in Germany December 26th is the second day of Christmas, and it's a holiday. Remember that holidays here mean all stores - including grocery stores - are closed. Christmas isn't "over" in southern Germany until the day after Dreikönigstag (Epiphany), which is January 6th. This year the powers that be in Baden-Württemberg decided not to send kids back to school on a Thursday, so classes resume on January 11th.


Later in the year both Easter Sunday and Easter Monday are holy days and again, everything is closed. Altogether we have 12 holidays during the year when businesses and stores are closed (only three of those are non-religious), though I guess Easter Sunday doesn't have to count because stores and businesses are always closed on Sundays.

I don't know of a single day during the year when stores are closed all day in the U.S.. Holidays are a time to draw people into the stores for at least a few hours with holiday sales. It would certainly convenient to have grocery stores open in the morning of Easter Sunday, Thanksgiving Day, Christmas Eve and Day, but we manage just fine by carefully planning ahead.

On Silvester (New Year's Eve) there are several fun traditions, and the night ends with fireworks at midnight. Some cities have professional displays, but many people buy little ones in the day or two before Silvester and shoot them off from home. We don't spend money on such things, but we go outside at midnight and watch the neighborhood show with a glass of Sekt and sparklers.

My Schwiegermutter asked me this year if there are any New Year's Eve traditions in America, but I couldn't come up with anything except watching the ball drop in Times Square on TV. Friends or family get together for a party and usually lots of drinking and couples kiss at midnight, but that's it as far as I know. It's fun, and there's nothing wrong with the way Americans celebrate New Year's. The important thing is being together with loved ones and ringing in the New Year.

This was yet another long-winded post intended to say that another reason I love living in southern Germany is that holidays are truly holy days and even M doesn't have to be in the office as early or as long as usual. His employees don't return until Thursday this week (the day after Epiphany), and many other German companies operate with a skeleton crew between Christmas Eve and Epiphany. Even for those who are back to work normally as of January 2nd, Epiphany is a holiday.

Anyway, holidays are great - quiet, relaxing, enjoyable - in southern Germany. And that is the fourth reason I love living here.