It snowed here yesterday. ALL day long. We have had no more than ten flakes of snow this season until yesterday, and temperatures have been nearer to autumn than winter. It's still not very cold by Wisconsin standards - hovering close to freezing, but still warm enough that sidewalks are clear of snow and ice in the sunny bits where they have been shoveled. 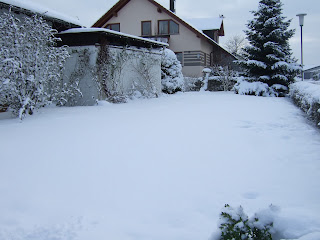 It might be pretty if I liked snow even a little. I do not. The only thing snow means to me is work (shoveling and snowblowing), potential injuries from slipping on our front steps, and even more danger on the roads.

I readily admit that photos of snowy mountains - the Alps, the Tetons, the Rockies - and snowy Alaska in the winter look gorgeous...as long as I am looking at postcards or online photos from the cozy warmth of my living room. I have fond memories of cross-country skiing with my family in northern Wisconsin, a few vague memories of downhill skiing on bunny hills, ice skating with friends in a park near my childhood home, and sledding on the one hill in my hometown. I'm glad I have those memories, and I have no desire to resume any of those activities.

So we have deep snow now (deep for here). Hopefully it will melt in the next few days so I can drive again. You see, here's the problem...

Streets are narrow, and the sidewalks are right against the curb at the street - no spacious row of grass between the sidewalk and the street. As I've written before, most Swabians have fences or huge hedges at the edge of their property. So when it comes time to shovel a healthy dose of the "weiße Scheiße", where do they go with snow? They push it into the street. 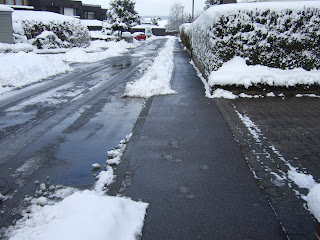 In the above photo I'm standing on our sidewalk looking at our driveway, and beyond is our neighbors' sidewalk. I took this photo because it shows the width of the sidewalk with and without snow, the height of the neighbors' hedge (in other words, there is no way for them to throw the snow over the hedge into their yard), and how much snow is on the street. If I'd taken a photo in the other direction, the street would look the same because I had to teach yesterday afternoon and didn't have time to do a proper job.

When dry and snowless, our street is just wide enough for two cars to drive slowly past each other. With snow it's a single-lane street with the thankfully infrequent traffic going both ways.

With a high hedge, wall, or fence at the property line, I get it that the snow has to be pushed into the street - there's nowhere else for it to go. All the neighbors on the left side of the street above have an additional problem of having no front yard. They have only driveways, garages, and hedges, so there is also no place to throw the snow. But even people who have low hedges or fences do this. Our hedge is now chest-high on me, and it's a pain, but the Wisconsinite in me cannot shovel the snow into the street. I throw it over the hedge. Luckily we have a snowblower, so if I were willing to use middle-weight machinery, snow removal would be even easier for me.

I want our entire sidewalk to look like our driveway does - no snow at the curb. Our neighbors would probably think I'm nuts - I forget to do Kehrwoche on Saturdays, but I waste time shoveling snow from the street/curb.

It would probably be futile anyway, because of course when the snow plow comes through the snow would all be back. That's no big deal - I'm surely used to that from Wisconsin. You just go back out and do it all again. The joys of winter.

One more thing about snow in Germany: there are lots of paths snaking through our village behind and between houses allowing pedestrians to get around more easily. There's one directly across from our front gate, and that's M's usual route to the office.

At the start of winter city workers put up a sign here saying "Kein Winterdienst", meaning they're not going to bother shoveling or salting this path during winter. But we (and others) use this path all the time - I use it when I walk to the butcher, the bus stop, the recycling center, the mailbox, and the grocery store. Since we have a snowblower, M usually plows this path up to the point where it turns into someone else's driveway. That person shovels or plows his driveway, of course, but stops at the start of this path (behind me as I'm taking this picture). Yesterday evening when M plowed here, that guy was shoveling as well and said to M, "You know, you don't have to clear snow from there." M said he knows, but since he uses that path everyday, he would rather clear the snow.

While I am slowly turning into a Swabian (or at least a Neig'schmeckte), some of the American has rubbed off on M as well. An American - if he had time and especially a snowblower - would shovel or plow this path because
a. it makes sense to do so especially if he uses the path,
b. he's already bundled up anyway and it won't take long, and/or
c. ...why not?

A German would tend not to clear the snow here because
a. he's got enough to do with his own chores, or
b. it's not his property, or
c. there's no law or rule that says he has to.

It's not that I'm blaming Germans for not clearing snow they're not required to clear. Life in Germany is so heavily regulated by laws and rules for what one must and may not do, that if there isn't a rule or law for something, there's no need to think about it. Winter brings snow and snow means boots, because sometimes you'll be trudging through snow banks (like when you need to cross a street in our village) or snow-covered paths that no one is required to clear.

My point, in case you've read this far, is that although I am often hard on Americans and tend to favor the German way of doing things, clearing snow is one of the things Wisconsinites do better. Granted, they have much more space available for shoveled or plowed snow - huge yards and parking lots, for instance. But even though most Wisconsin streets are wide enough for at least three cars to drive abreast with or without snow, Wisconsinites do whatever needs to be done to keep the snow off the streets.

I'll end with a few more photos of what I do not miss about Wisconsin.

P.S. This post was not approved by a German. M sees nothing unusual or wrong with the way Swabians shovel, and I accept that. :-)
Posted by Ami im Schwabenland at 14:21