Sankt Nikolaus and His Shady Buddy

December 6th is Nikolaustag in many parts of the Western world. Children go to bed the night before after hanging their stockings at the fireplace or putting a pair of shoes (or boots, because they hold more) in front of their doors, hoping for a visit from St. Nick, who will fill them with candy, treats, fruit, nuts, and perhaps a small gift. 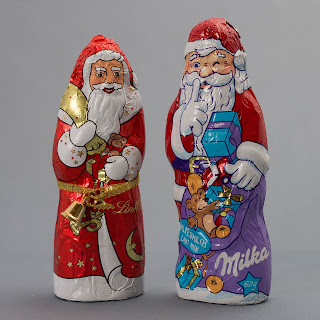 This is another tradition that is mainly Catholic (most Protestant religions don't recognize saints). My clever Lutheran parents held off with the stocking thing until Christmas morning to buy themselves some extra minutes of sleep. When my brother and I woke up we could run downstairs to see the wrapped gifts under the tree, but we had to keep relatively quiet until our parents got up. We were, however, allowed to grab our stuffed stockings and unwrap, play with, or devour anything that was in there. We usually made just enough noise to wake them up before long, but when that didn't work our cooperative Sheltie helped us out. "Where's Mom, Lassie Buffy? Find MOM!"

When my kids were young, I followed the German custom. They put their shoes in front of their bedroom doors when they went to bed, and I, er, I mean St. Nick filled them with treats during the night.

Few children ever ask who St. Nick was. ["Who cares? Just give me the candy. Yeah, you can keep the orange."] Well, I'm here to answer that question for my lucky readers.

There are actually several versions of the story, of course, but this one, which I learned from my Schwiegermutter, is my favorite.

Sankt Nikolaus is depicted as a bishop wearing a red miter and red cloak and carrying a shepherd's staff. He has gray hair and a flowing gray beard. He was the bishop of Myra, in modern-day Turkey, in the first half of the 4th century A.D.. He was a kind and good man who cared for the less fortunate. A poor man in his community had three daughters who all had reached or were nearing marriageable age, but he had no money to provide a dowry for any of them. The girls were in danger of having to turn to lives of prostitution, because of course no man would marry a woman if her father had no money to give him. Nikolaus was wealthy and wanted to help, but secretly so as not to insult the father's pride. During the night while the family was sleeping, Nikolaus tossed three bags of coins one by one into their chimney as he passed by. The girls had washed their only pairs of socks the night before and had hung them at the fireplace to dry. Into these socks the bags of money fell, and when they awoke, the girls were delighted to see that they each now had enough money to marry.

Many American Christmas traditions come from Germany, and you can see some of them here: Santa Claus also wears red and has white hair and a beard, we hang our stockings at the fireplace (if we have one), gifts are delivered secretly during the night... And it was German-American artist Thomas Nast who first gave us our image of Santa, which appeared in Harper's Weekly in 1866.
Ah, but there's more. In Germany even today, Sankt Nikolaus doesn't travel alone. He's got a dark creepy companion who sloths behind him and scares the living bejeezus out of children. This cad's name is Knecht Ruprecht, and you just don't want to mess with Servantboy Ruprecht. Like St. Nick, he carries a sack over his shoulder - but his isn't filled with toys. It's filled with the sad, now-repentant little hoodlum children who dissed their parents, sassed their teachers, or pulled the wings off butterflies in warmer months. That's right, Knecht Ruprecht's job is to gather up all the bad children and carry them away in his sack, never to be seen again by their loving parents. He carries a switch, too - a beating stick. The naughty little urchins get whacked before they're thrown into the dark sack and dragged away.

This side of the tale isn't just German (and in fact nowadays the Germans have toned down the frightening story), but rather widely known throughout Europe. No one explains this tale better than David Sedaris, so I urge you to take 15 minutes out of your day or evening to listen to this clip. The whole thing is good, but the St. Nick story begins around 3:45.

American kids get off easy in comparison! They just get threatened with empty stockings or pieces of coal if they're naughty around this time of year. But Germans have been scaring their children into behaving for generations with the help of the brothers Grimm, Max und Moritz, and stories like Suppenkasper and der Daumenlutscher, so the whole Knecht Ruprecht thing just fits right in.

At any rate, I wish you a happy Nikolaustag, and children, I surely hope you've been good!

Posted by Ami im Schwabenland at 17:00