If you go walking, cycling, or running in southern Germany, you're bound to pass one dozens of these. This is called a Wegkreuz or Feldkreuz, which translates to "wayside cross" or "field cross". Bavarians and Austrians call them Marterl. 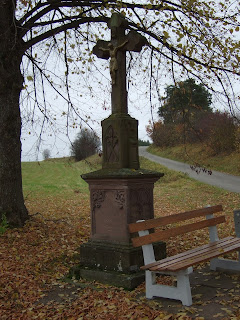 They are often found at intersections of walking paths, and they are typically made of stone (some are made of wood or metal). Most Wegkreuze were erected in former centuries and often have the year it was dedicated inscribed on it somewhere as well as (sometimes) the name of the person or family who sponsored it.

The Wegkreuz is generally a Catholic thing, which is why they are more commonly seen in southern Germany than in the north. The top is nearly always a crucifix or an image of Mary and Jesus, and the base includes one or several inscriptions such as a Bible verse, a message to passers-by, or a poem. 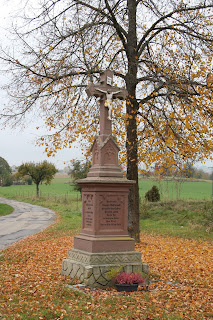 When deepest sorrow brings you down,
no path of life brings you success,
hurry with courageous prayer
to the cross that stands upon the trail.

Another thing you'll notice is that there are often fresh, seasonal flowers at the base of the Wegkreuz, planted either in the ground or in a pot. Someone is taking care of those flowers. It could be a family who lives nearby, the church community, a local foundation, or just someone who cares. 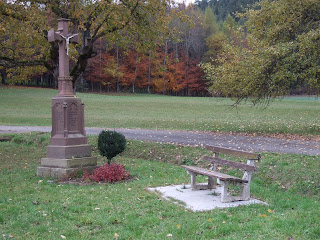 There is sometimes a bench near the Wegkreuz for those who want to rest and reflect, and I have often seen someone sitting there. I always wonder if they are just using the bench because it's a peaceful place to sit awhile, or if they are praying or remembering a loved one.

In earlier times a Wegkreuz was erected in remembrance of someone or as a show of the family's or individual's faith or gratitude. When Christians passed one they often paused a moment, made the sign of the cross, and/or said a prayer. Farmers on their way to their fields would probably pass several of these crosses.

The Wegkreuze also helped with orientation as important pathway markers in the days before trail signs. The one above is at a crossroads of five different paths, and if M asks me where I went walking on any given day, I can tell him I went "down the hill by the tennis courts and took the second path left after the Wegkreuz". Some of them are even shown on hiking maps. There are also Wegkreuze that mark a dangerous place or remember an accident that occurred at that spot. 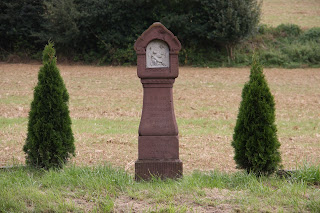 The above Wegkreuz is actually on the edge of a farmer's field across a highway from a walking path, so you only see it from a distance. Only by taking a picture of it and zooming in was I able to see that it was put there in 1924 in memory of World War I ("zur Erinnerung an den Weltkrieg 1914-19"). The top of it is a stone carving of Mary with the crucified Jesus in her lap, and the inscription under that says

There are thousands of Wegkreuze in Baden-Württemberg alone. I'm not an overly religious person, but there's something comforting to me about them. Someone cared enough* to pay good money to have a semi-permanent monument placed in that spot as a reminder to all who pass by that God is there. They are not in your face like Christian bumper stickers announcing that the driver loves Jesus, they don't ask for donations, and they don't preach.

*Yes, I know that some people paid for such monuments in the hopes of increasing their chances of getting into heaven or in penance for some sin committed - to each his own.

Today there are few new Wegkreuze erected in the traditional sense on hiking trails and at crossroads. These days it is more common to see a new wooden cross on the side of a road marking a place where someone was killed in an automobile accident, such as this one between our village and the next. Notice the autumn leaf necklace - someone placed that recently, though the date on the cross shows the year 2000.

For cyclists, hikers, runners, and wanderers, the traditional Wegkreuz signals a fine place to stop for a rest, perhaps a snack, or even a group meeting point to start or end a tour. Along with a bench you may find a garbage bin, and the setting is commonly under a group of shade trees which can provide needed relief from the blazing summer sun. 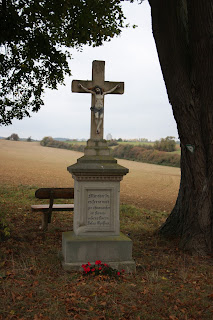 All of the above Wegkreuze are within an hour's walk from our home, and I would really like to know the story behind each one.

Posted by Ami im Schwabenland at 16:19