On Saturday M and I attended our second Kochkurs (cooking class) at the fabulous restaurant in our little town. The Kochkurs is something the Chefkoch is starting to do more regularly, much to our delight! The theme this time was Asian cooking, which we don't do a lot of, to be honest - but we knew it wouldn't matter. For us the point is the skills and information he teaches us, the tips on where to buy various ingredients, learning how to make our own sauces, and listening to anything else he has to teach us.


The Kochkurs started at 10:00, and we only returned home around 16:00! The restaurant is normally open on Saturdays for lunch, but on the days he does the Kochkurs, the Chefkoch closes his restaurant and the students invade the kitchen. We each got an apron and a copy of our menu and instructions. He started out explaining the food we'd be preparing for the four-course menu we'd also get to enjoy, answered whatever questions we six students had, and then we dug in.

Under his instruction and guidance we did all the preparations that could be done ahead, so lots of schnibbling of vegetables, combining ingredients for the marinade and dressing, preparing the meat and shrimps, and mixing and cooking the pudding, which would then be poured into dessert cups and chilled until the end.

Our Chefkoch is not only a master chef but also an excellent teacher. We weren't just putzing around in his kitchen - he taught us the best way to peel a clove of garlic, that it's best to peel peppers for something like stir fry because the peel is hard for many people to digest, that it's essential to get the pan very hot before adding meat to fry, how best to peel ginger (with a cheap spoon!), and which ingredients can be easily substituted for the ones in his recipes ("If you don't have maracuya juice, just use orange juice"). Those tips were especially helpful for me, because I'm one of those who tends to stick blindly to a recipe out of fear of screwing it up by substituting. He explained the how and why of almost everything we did and always got our attention when moving to a new major step so we'd know what to do at home when we try to recreate these dishes.

One major difference between German and American recipes is that German ones tell you which herbs and spices to add, but often not how much. It says "etwas Curry" ("some curry). When asked "how much more [herb] should I add?" our Chefkoch often answered with, "about double what you just added."  I know that's one of my big cooking problems - I never season anything enough.

Although we worked with ingredients we've never used at home before (lemon grass, mango, curry paste, coconut milk...), he showed us that these recipes are absolutely do-able at home by mere mortals like us! Everything was hands-on instruction, demonstration, and explanation.

He gave us some tips on where to buy local fresh produce and that we should always buy seafood frozen, since there is no fish that comes to our area fresh from the fisherman. What's marketed as "fresh fish" in our grocery store, for instance, has been frozen (and thank goodness) on its journey from the sea to Horb.

I learned that when I buy a pot of herbs, they'll last longer if I re-pot them right away into a bigger pot. Perhaps I should have known that already, but I've never bothered except in the summer when I plant the herbs outside. When asked, the Chefkoch told us which type of pans he prefers and why, how to clean a stone mortar (don't ever put it into the dishwasher!), and what parts of a leek are good for which purposes (you can use more than just the middle white part!).


It was a perfectly enjoyable and informative morning and afternoon! Just like last time, I came away having learned a lot, and having tried (and helped prepare) several dishes I may not have ordered. The Thai Curry Suppe was admittedly too hot for me (I have a wimpy palate), though I did enjoy half of the serving. And that soup is what confirmed what I have long thought - although there are foods I don't like and foods I haven't yet dared to try, I am pretty sure I would eat anything cooked by this chef. That soup contained three ingredients I really don't like (curry, ginger, and coconut [milk]), and yet I found it tasty. If I ever get the courage to try sauere Kutteln (sour tripe, which I think is the lining of a cow's intestine), saure Nierle (kidneys), or Hirnsuppe (brain soup) - all dishes I've heard of here in Swabia - it will only be at this restaurant. I, however, am not sorry those dishes aren't currently on his Speisekarte! 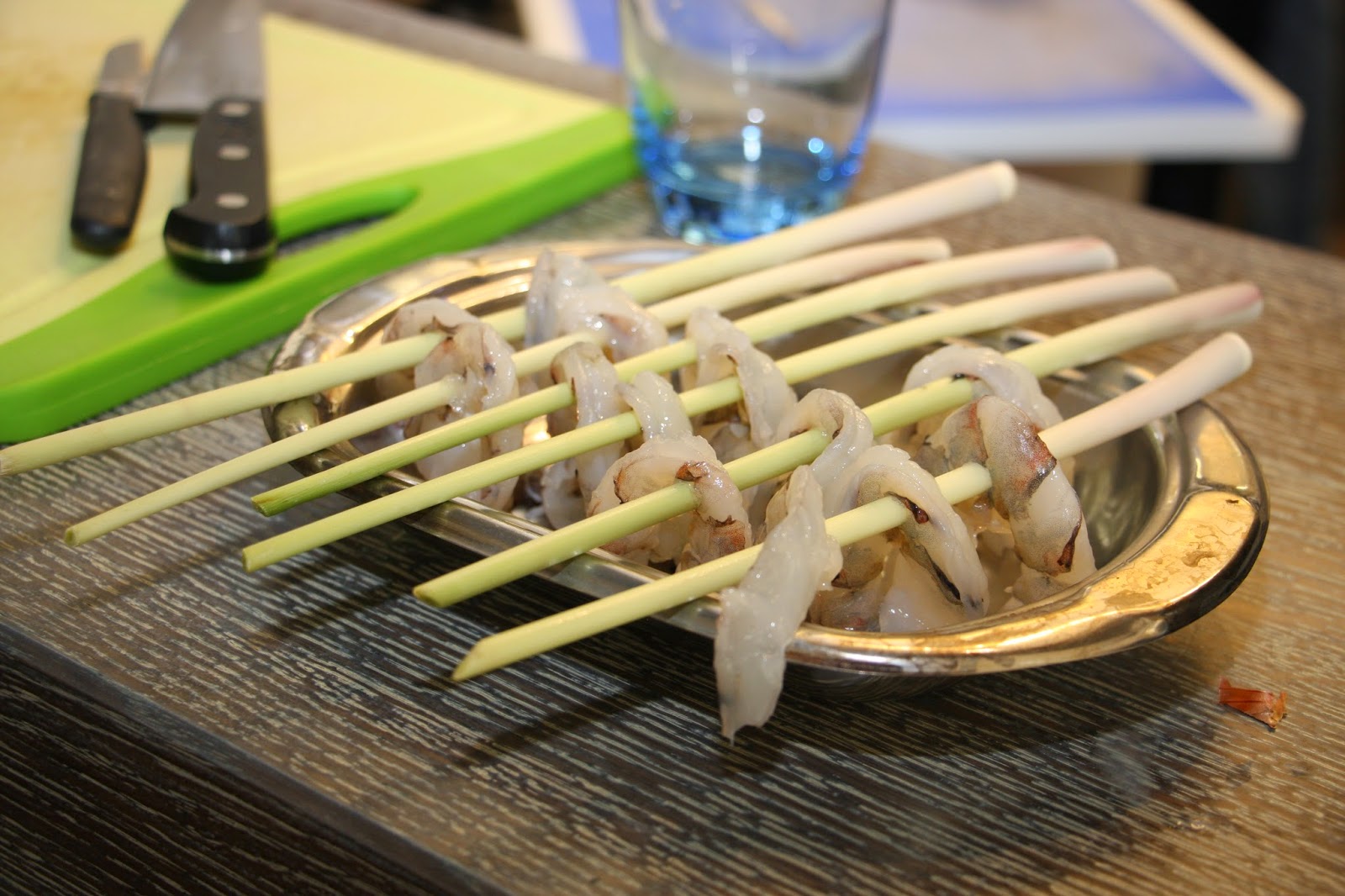 One of the other students said that she had grown tired of going out to eat because there just aren't many restaurants around that offer such a fabulous dining experience, delicious and special food, and that "extra something" that she would eagerly return to or recommend them to others. But then recently she came to Straub's Krone and was really impressed. Swabians don't give empty praise, and we could only nod in agreement. That's why we dine here about once a month!


After our first preparations were completed, we finished and dished up the salad course and sat down with the Chefkoch to enjoy our first course with a glass of wine. We chatted about all kinds of topics, some related to cooking and some not, and then we cleared the plates and got back to work. Each course after that worked the same way. Despite the chatting and relaxing, our Chefkoch never once rushed us or indicated that we should quit yammering and get back to work so he could have a rest before having to open up for dinner business! He gave the impression that he wanted to be right where he was, teaching us whatever he could in those several hours, and enjoyed doing it.

At the first Kochkurs we attended in 2013, he taught us how to make Bratkartoffeln at my request, and I haven't failed at that since (before then it was kind of hit-or-miss for me). We learned tons of basics that day which have become normal for us now, and I have no doubt that we'll keep learning new techniques with every class we take.

This is the Sesame Caramel garnish we made for the dessert:

We are already looking forward to the next Kochkurs, which he said will be during the Spargelsaison! We couldn't get enough of his asparagus dishes last spring (Germans go mad for white asparagus during the roughly 6-week season), and since we only have one (delicious) home recipe, we're eager to learn more from him!

I will end with the final products - the dishes we prepared.

Posted by Ami im Schwabenland at 19:30