a tribute to the beautiful Scottish Isle of Mull...


This post is somewhat retro and somewhat forward-reaching, since all the photos are between four and nine years old but we have booked a week on the Isle of Mull for September 2015 and expect to have plenty of new pictures and memories when we return.

In 2006 M and I got married on the island, on a day so beautiful and clear even the local photographer was impressed. We would have had the tiny private ceremony in the library of the Glengorm Castle, but the decidedly unscottish weather allowed us to be outside on the lawn next to the castle overlooking the sea.

When I say private ceremony, I mean it was just us and our two witnesses from Edinburgh (and of course the registrar who performed the ceremony and her assistant*). We didn't want anyone to feel obligated to make that long and expensive trip, and to be honest we wanted this to be a private moment just for us. It felt very intimate and meaningful and if we had it to do over again, we wouldn't change a thing.

*An unexpected guest was Pip, the castle's semi-retired Border Collie, who popped out of the Rhododendron with a plump and freshly killed bunny hanging from his mouth, which he devoured undisturbed by our intrusion in his dining room. Afterwards the assistant, who'd kept her poise during the feast, doubled over in horror saying, "'Twas awful! I could hear the bones crunchin'!"

We stayed three nights in a room of the castle with a stunning view out the windows overlooking sheep fields facing the sea.

In 2007 we returned with both of my children and M's mother for a week in one of Glengorm's self-catering cottages. We went hiking, explored Tobermory and two castles (Duart and Torrosay, the latter of which was sold a few years later and is no longer open for tours) plus the Aros castle ruins, drove around part of the island and hiked to MacKinnon's Cave, into which my Schwiegermutter's cousin (one of our two witnesses, both of whom joined us for several days on the island) scrambled with my son - there was only time for those two to go in because the tide was rising - ate at a great restaurant in Salen, and hiked some more. My daughter and I went pony trekking twice also, once on Glengorm's grounds and once not far from Loch na Keal.

After our week on Mull the five of us drove through the Highlands on a trip planned by M's mother. We stayed at the Clachaig Inn near Glencoe, toured Eilean Donan Castle (where, when my Schwiegermutter asked the brazen guide - surely a blackguard cousin of the clan who owns it - what he wears under his kilt, showed us a bare cheek!! I may or may not have let out a shriek of surprise...), Urquhart Castle, and Blair Castle, rode the Hogwart's Express Jacobite Steam Train from Fort William to Mallaig and back, overnighted in Spean Bridge, Drumnadrochit, and Kinloch Rannoch, took a boat tour on Loch Ness, explored touristy Pitlochry, and strolled around the battlefields of Culloden, Bannockburn, and Stirling.


We returned to Mull in 2010, but this time my son decided he didn't want to come with us. Silly lad. This time we stayed for two weeks in Sorne cottage and took many more hikes and one day trip to the Isles of Iona and  Staffa. Thank heavens for me, the sea was very calm that day, so the ride out to Staffa wasn't at all horrifying, which I have heard and read it can be.

I have to share two of my favorite pictures from our time on Iona, but first an explanation: my Schwiegermutter and I love museums, churches, castles, etc.. We like to take our time and read carefully. M and my daughter like museums, churches, and castles to a point, but they both read quickly (and retain more than I do!) and can make it through a self-guided tour in about half the time. While I was wandering around the ruins of the Iona Abbey, I saw M and my daughter sitting on a bench. Awww.... sweet picture! They grinned, I snapped it, and then wandered off. I turned to see if they were following me, and snapped the second photo. This pair of photos makes me giggle every time I see them. 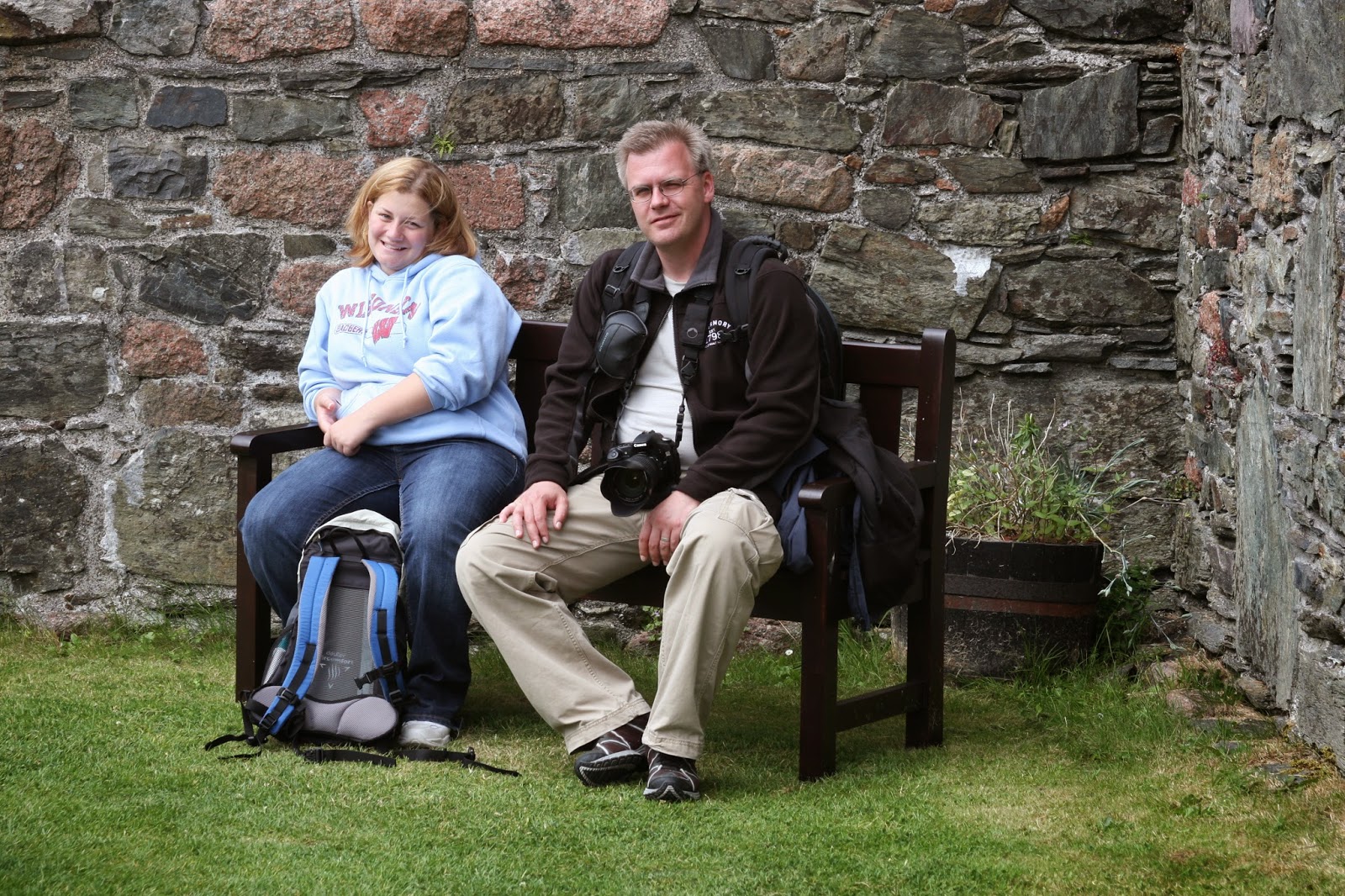 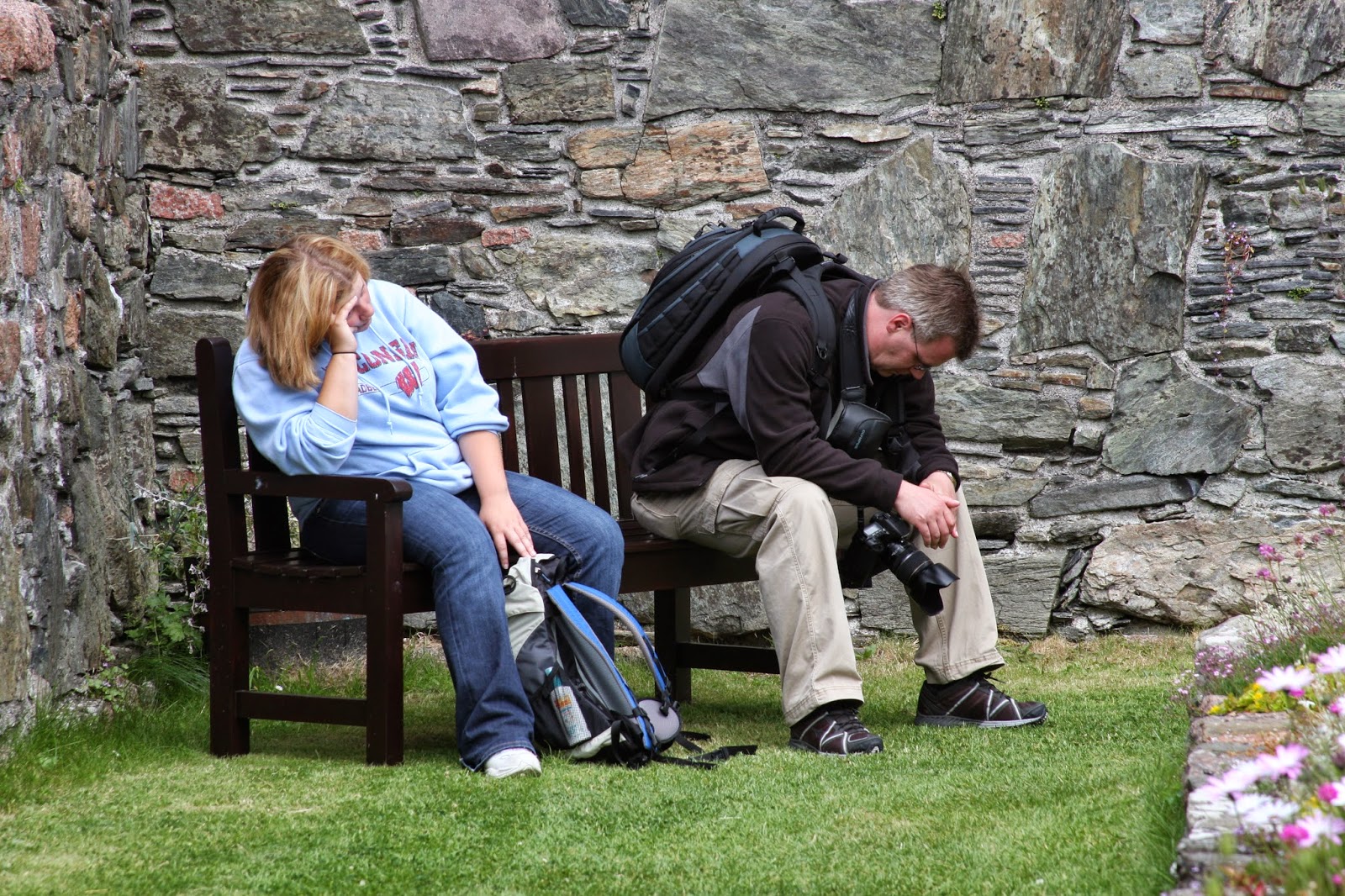 In September we're going alone and staying in one of Glengorm's self-catering flats. This trip will be about hiking and photography, and M wants to visit the Puffins on Staffa again. I'm not so sure about that unless the sea is as calm as last time - and what are the chances of that?! I might have to wait for him on Iona and explore that island more.

We have been told we should visit other islands in Scotland and that there is much more to see! We're sure this is true, but there is something so familiar and special to us about Mull, and we keep longing to return. There's still more to see on this small island, too - for instance we haven't climbed Ben More yet! And with the vacation nine months away, there might even be enough time for us to get fit enough to give the ol' mountain a try.

One more thing we'd like to do is hear & see Iain Thomson, Mull's "singing shepherd," live in a pub or at a cèilidh. We heard his music playing in a shop in 2010 and promptly bought his CD, which we love. When we found his second one, we ordered that, too. I'm listening to his music as I type this, and I could listen all night. Instrumentals, Scottish reels, original songs, cover versions, traditional tunes... One of my favorite lines is from a song on his first CD, called "Come by the Hills": "The cares of tomorrow must wait 'til this day is done." I am so grateful that little shop in Tobermory was playing his CD the day we walked in!

This video is a montage of M's and my photos set to Iain Thomson's song "Ulva Boatman" (used with permission). M made it the year I arranged a penpal exchange between my students in Wisconsin and students at the high school in Tobermory, to give my students an idea of what there is to see and do on the island.

It's best viewed in the small version rather than full screen, and it probably won't work on a tablet or android.*

My words can't do justice to the wonder and beauty of this island, but hopefully the pictures speak for me. Mull has captured my heart, and I cannot wait to return.