I never need an excuse to go to Tübingen. It's a beautiful university town only 35 minutes from us by train, and I've been there often enough that I know my way around quite confidently. I even gave a short city tour to the mayor of Sheboygan, Wisconsin and his entourage last spring. It's definitely one of the top towns to visit in Baden-Württemberg.

This week Tübingen is holding its annual Chocolate Festival, which I had never been to before, and since my daughter is visiting and loves chocolate and buying chocolate for her friends, we put it on our itinerary. What better reason to hold a festival than to celebrate chocolate?!

We intended to go yesterday, but we woke up to blowing snow and the weather report didn't look promising for the rest of the day. Today's damn lie of a weather forecast claimed dry and gray, so we postponed our trip. The forecast nailed the "gray" part (we haven't actually seen the sun since we returned from the U.S. on Friday morning), but we were soaked by the time we stopped for our first Glühwein with a really pleasant combination of rain, snow, and puddles. 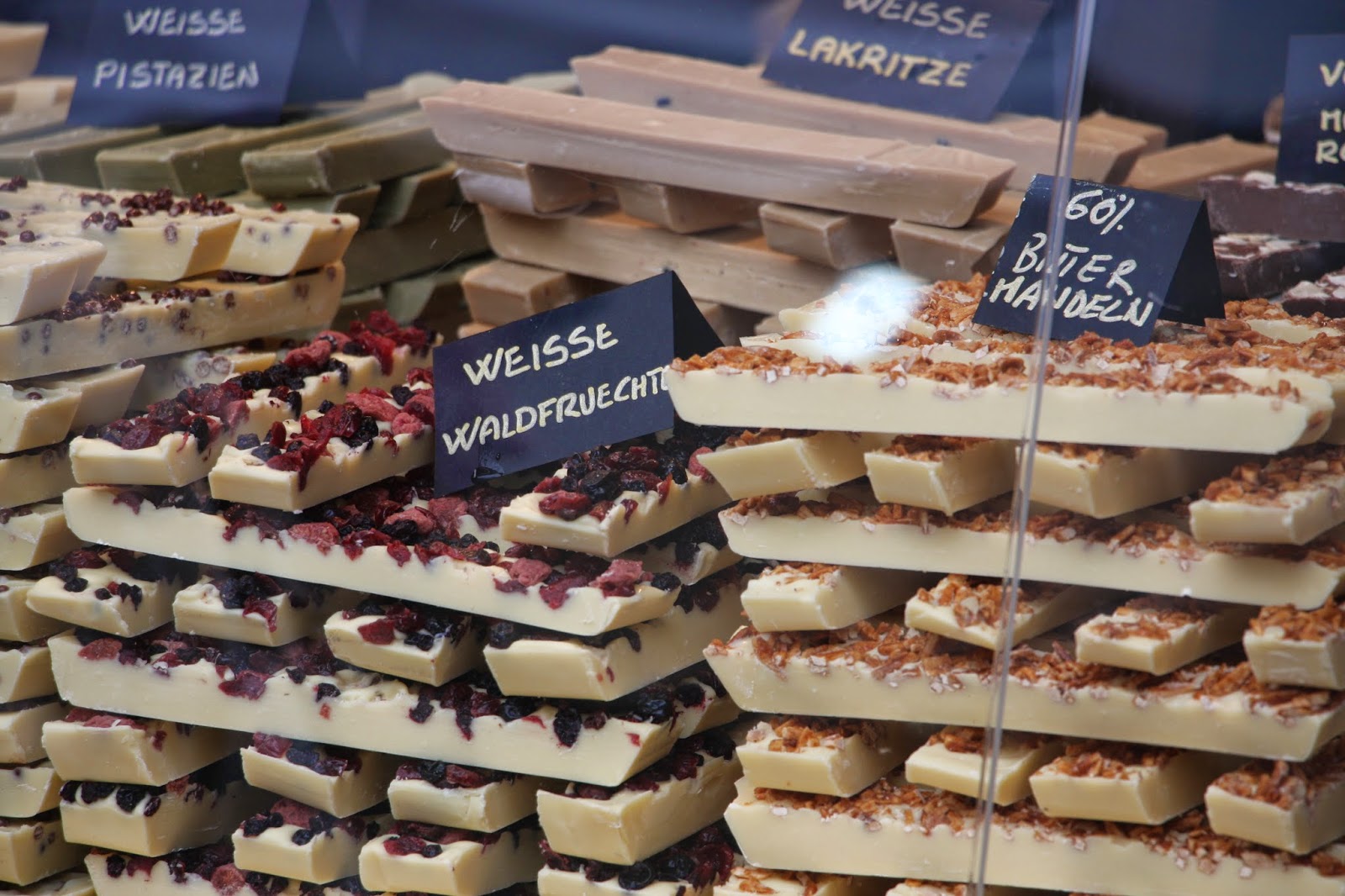 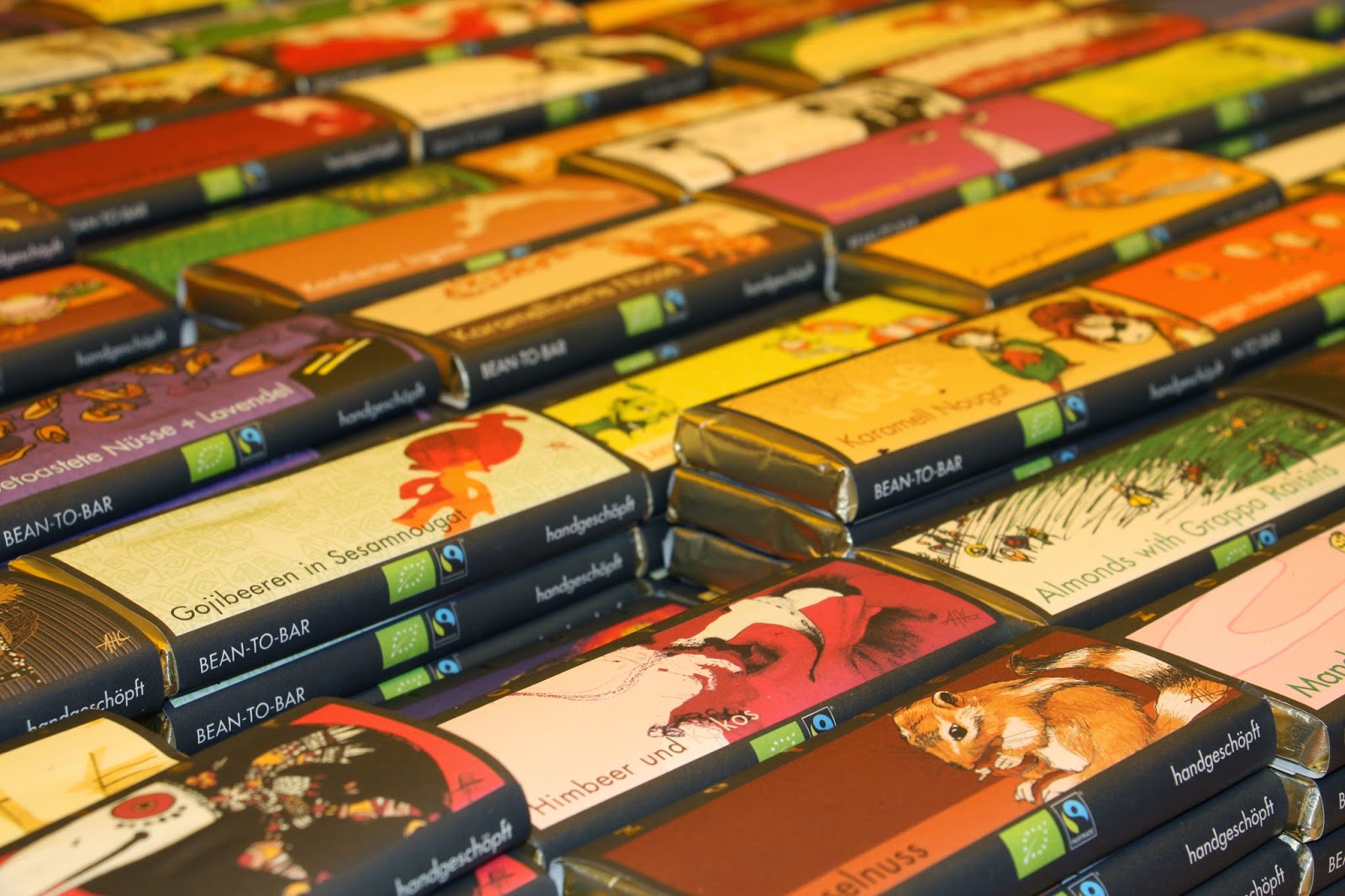 One of my favorite stands is one with Belgian chocolate which is made to look like old rusty tools. I gave some of these to my son for Christmas last year, and he said they were delicious.

I was considering some candies with dried fruit, but the guy working the stand freaked the hell out of me by speaking enthusiastically in Italian while looking at me and alternately shouting Italian to the person working the booth across from him. I opened my mouth to ask a question, switched to a addled smile, and sidled away. Italians are scary. And that's bad, because we're going to Rome next week.

As we decided to check out our favorite Flammkuchen restaurant for lunch (Ranitsky Kaffeehaus), my daughter heard someone call her name. I turned around to see one of my former students from our tiny little school in tiny little Fond du Lac, Wisconsin and her friend who was an exchange student at the school about five years ago! We chatted for a bit, and then of course kept bumping into them for the next hour or so.

Since Ranitzky's was jammed full without half a table to spare, we decided to grab a Bratwurst at a stand, which is really the thing to do at a festival or Weihnachtsmarkt anyway. For my three Wisconsin readers, a Bratwurst here is nothing like a Bratwurst in Sheboygan. You'll just have to trust me on that, because I didn't take a photo. 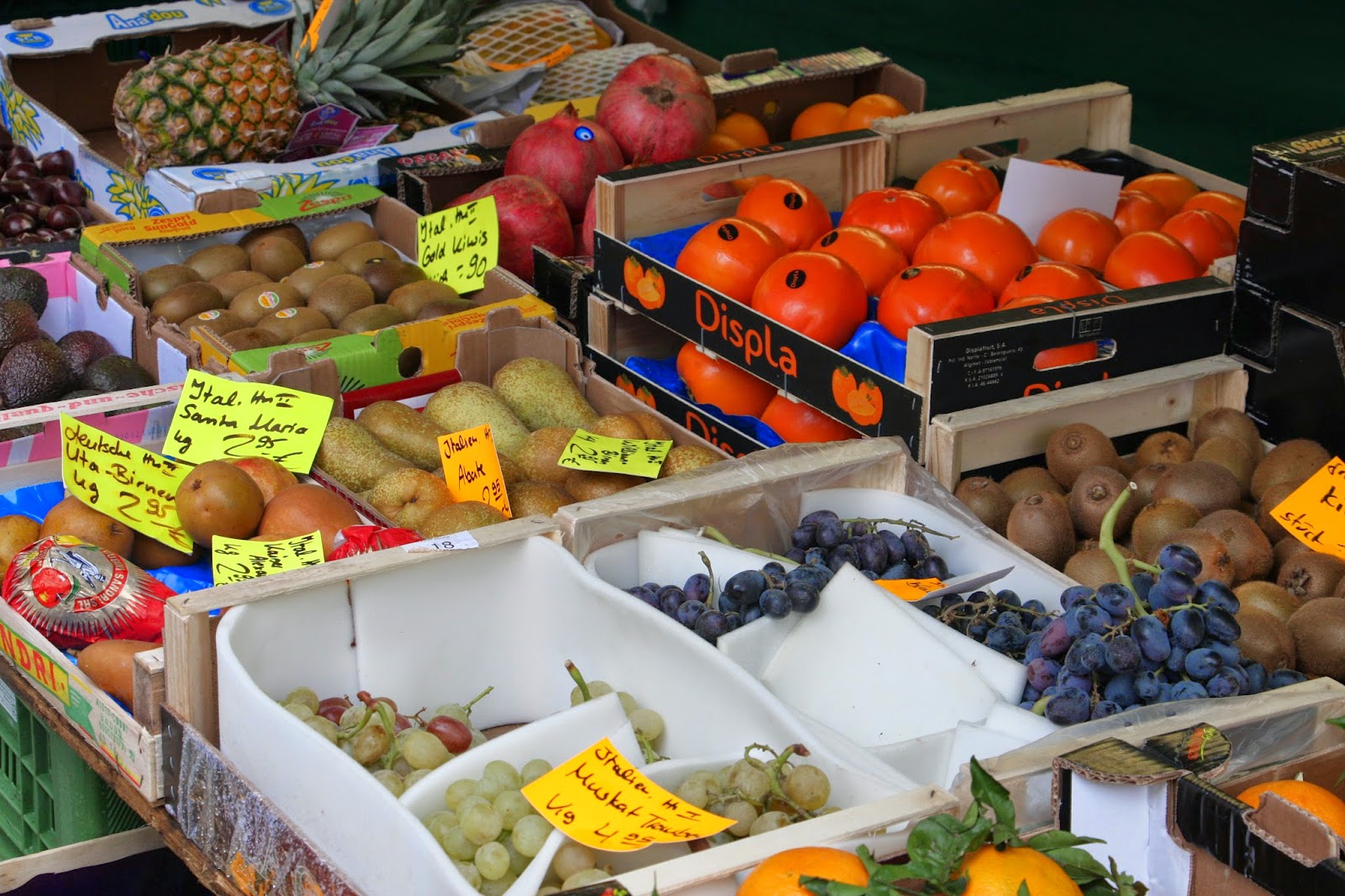 Of course the regular market is going on as well, and you can therefore find fruits, vegetables, and flowers without a chocolate coating.

By early afternoon the college students were awake finished with classes, families had picked up their children from day care, and tourists had found Tübingen, so it was starting to get crowded. This is when my daughter and I start wanting to punch people, so we chose to head for the train station via two bookshops. Between bookshops we passed a stand with a basket of chocolate-covered obviously freshly-made potato chips on display. I wheeled around and returned, and had a conversation with the vendor nearly worthy of a Douglas Adams novel (translated below into English): 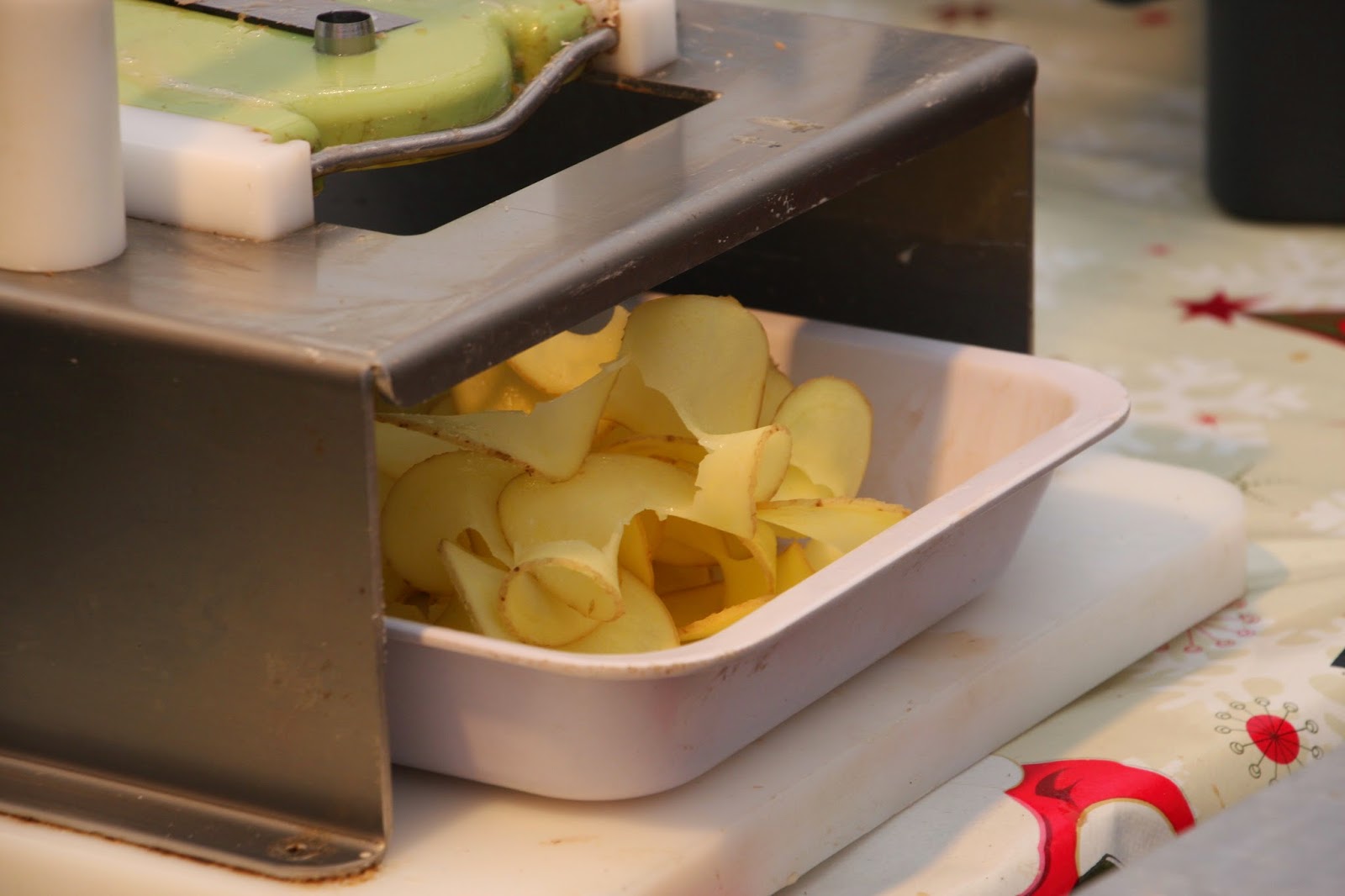 I paid him another Euro and he dribbled some chocolate on my chips.

Although he was not a native speaker either, we were speaking to each other in German. It was one of those "What on earth is wrong with my German?!" experiences.

Anyway, the chips were delicious despite the lack of salt, and I should feel lucky I came away with more than an empty bag. 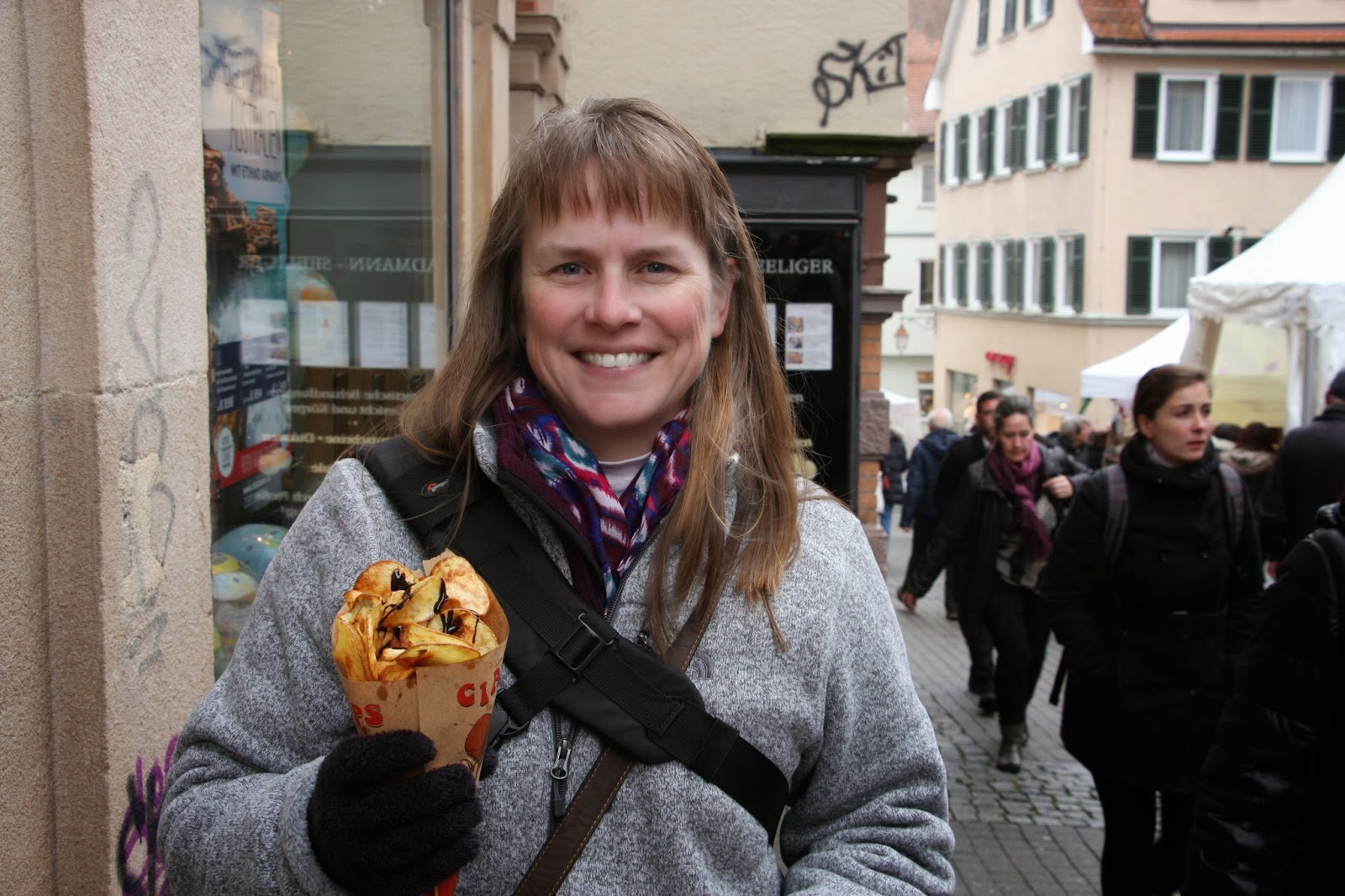 We took an earlier train home than we'd planned to take, but we'd seen and done what we had wanted to and decided a brief nap would be ok, too, though I wrote this post instead.

I think a future thread for my posts might be "Spotted in a Crowd". If so, some of today's entries would be:
a couple having a heated marital spat in sign language (we saw them twice - it was quite an argument!)
a beautiful Bernese Mountain Dog focused intently on his human's lunch
an adorable class of Kindergarten children sampling offerings at every booth
a woman walking around with an open umbrella long after the rain had stopped
and of course: former students from 5 years ago, one of whom lives 4000+ miles away!
Tomorrow we're off to Esslingen's incomparably fabulous Weihnachtsmarkt and Mittelaltermarkt where we'll meet my Schwiegermutter and take in more Glühwein* and festive cheer.

*My daughter doesn't actually like Glühwein, silly girl, so she drinks things like heiße Schokolade or Punsch mit Amaretto.
Posted by Ami im Schwabenland at 17:17