How do you spend Heiligabend (Christmas Eve)?


When I was growing up, Christmas Eve was always the big celebration with extended family. My aunts, uncles, and cousins came from the Appleton and Minneapolis areas to my grandparents' home in Sheboygan, Wisconsin, and my parents, brother and I lived also in Sheboygan. There were 15 of us. I remember always starting, after everyone had arrived, with cheese and crackers and shrimp cocktail while final preparations were made in the kitchen. My grandfather said a lengthy, heartfelt prayer, and then we consumed a delicious dinner of ham (sometimes turkey) and a billion sides, salad, and several desserts. After dinner we had at the pile of presents under the tree, which ended up being somewhat of a rip-tear-"Thank you!" fest, but we paused every time someone came to a present with an attached poem. My grandparents were into writing cutesy rhyming poems for the special gifts, and they were usually funny or clever. After the carnage of gift opening was over, the wrapping paper was stuffed into garbage bags, ribbons, bows, and gift tags were put back in the box to be used the next year, and our presents were placed in neat piles, we headed off to church. After church the Appleton crew usually drove home and the Minneapolis contingent bunkered down to rest up for the 6-hour Christmas Day drive home.

I have lots of fond memories of family Christmases, which were often loud, full of energy (and definitely full of love), stressful at times, and truly special. It worked out nicely to have the extended family celebration on Christmas Eve, and then our private family Christmas was the next morning as soon as my brother and I could will our parents out of bed.

Our celebrations here in Germany are quite different, mainly because we are always a small group and there is absolutely no hustle, bustle, schedule, or stress. This year we have the fewest people ever - just my daughter, M, and I are celebrating together. My Schwiegermutter is spending Christmas with her daughter and her family this year in northern Germany, but she'll be back with us for Silvester (New Year's Eve).

This is how we're doing our quiet little Christmas Eve:

This morning I walked to the butcher to pick up our €100 order that will get us through 'til next Monday: soup meat & bones, beef tenderloin, pork tenderloin, ground beef & pork, leg of lamb (for Irish stew), and sausage meat (for Maultaschen and sausage rolls).

Then M started the beef soup for tonight's Fondue, which will boil on the stove for several hours. We usually do fondue on Silvester and Raclette on Heiligabend, but my daughter likes fondue better and she'll be back in the U.S. by Silvester.

While my daughter tended the soup M and I drove to the bakery at Norma to see if they had any fresh baguette and rolls left, and we were pleased to find that they did and weren't even busy! Mental note for next year: no need to buy the bakery the day before!

Our tree is up but not decorated yet (another difference to the way we did things in America - the tree went up at the end of November), so we'll do that next. M puts on the lights, and we girls will hang the ornaments under M's watchful scowl. He prefers just the traditional Weihnachtskugeln (Christmas balls, I like to call them), but I brought all my ornaments from the States - dogs, stars, mini picture frames, apples, sheep... and I love the wooden ornaments I keep buying at Weihnachtsmärkte.

Next M will make my daughter's favorite part of the fondue dinner - Sahnedip. This stuff goes on everything - fresh veggies, bread, meat, and sometimes just on the spoon. It's not exactly low-fat, but it's delicious! It's best to make this early because it has to sit for a bit to let the tastes blend.

We'll have a light lunch so as not to spoil our appetites for the fondue, and then we'll watch the sickeningly adorable film, Drei Haselnüsse für Aschenbrödel, which has been a tradition in M's family since he was young. It's a 1970s Czech version of the Cinderella story dubbed into German with really, really terrible special effects. At one point Rosalie the friendly owl is supposed to be circling in the air, and one can't help but see the string to which the fake beast is tied as someone out of view swings it around in a circle. Through much of the film the prince and his pals cavort around in the snow wearing tights and shockingly short tunics. But it's part of Christmas, darn it, and we watch it every year. The theme song has burned itself into my brain, and I'm not at all creeped out by the look on the dashing prince's face on the DVD cover (yes, we own the DVD) as he gazes with unclean thoughts at the little peasant girl dressed in virginal white.

I'm thinking about introducing the cartoon version of the Grinch who stole Christmas as a possible alternative.

After our Christmas movie we'll take a nap and then start schnibbling vegetables for the fondue dinner and opening the jars of other nibblies to put in decorative dishes. We heat up the soup again, pour it into the fondue pot, put everything on the table, and the final step is to slice the tenderloin (beef and pork). Then the slow and leisurely feast begins, not to end until we can't fit in another spoonful of Sahnedip. We skewer bits of tenderloin and a mushroom, and the rule is, of course, that if anything falls off into the soup, it can't be fished out. We eat the soup and whatever bits have fallen into it the next day for lunch. 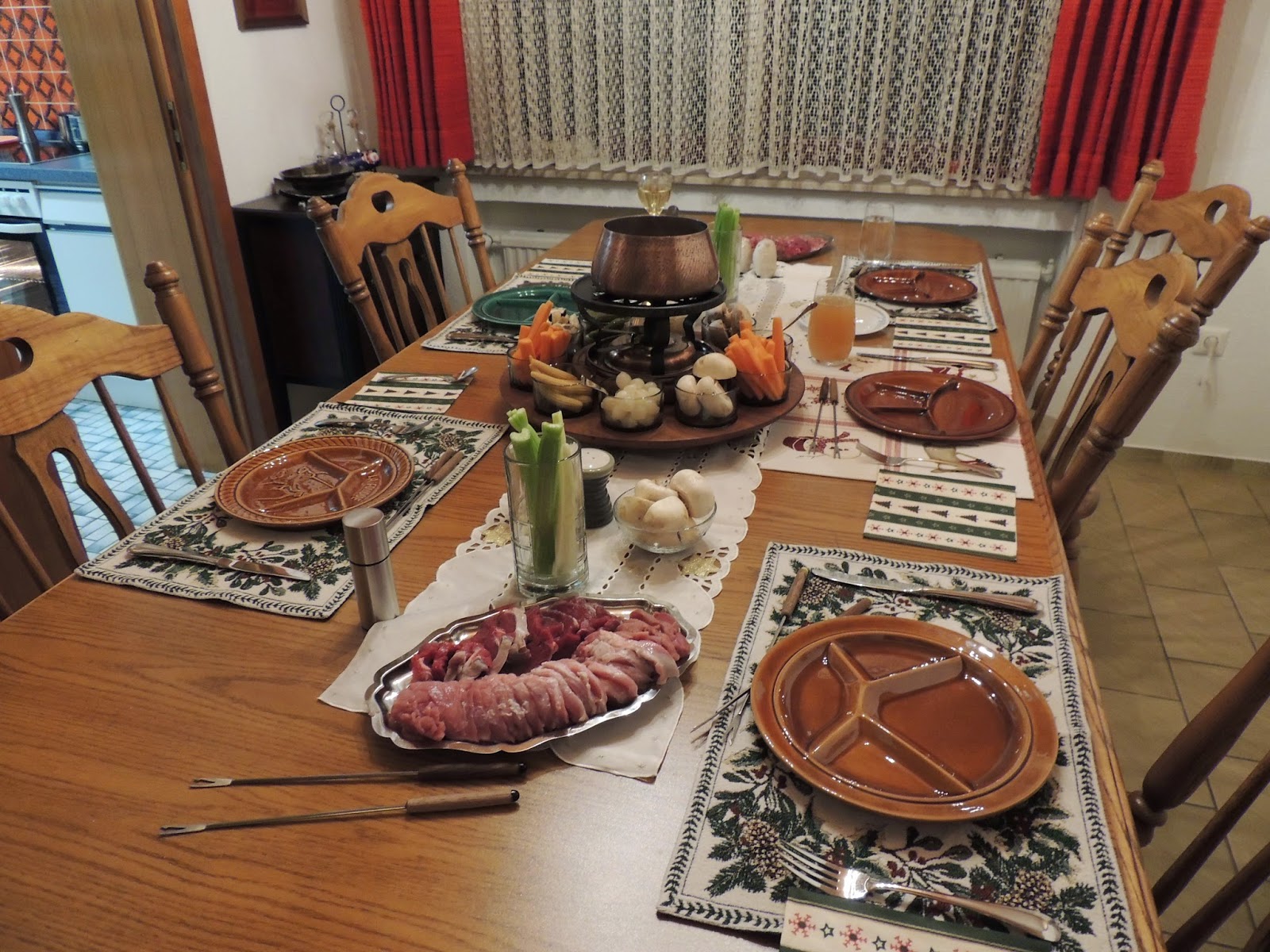 After dinner we'll have our Bescherung (gift opening), which we do slowly as well, one at a time. Following that we'll listen to David Sedaris's narration of the Dutch St. Nick tradition, which we've heard many times but it still makes us laugh like crazy people.

And that's it. We usually finish the evening browsing new books (Christmas in our family isn't Christmas without new books), and perhaps watching a little TV or a new movie if it's early enough.

Tomorrow we'll have another quiet and relaxing day. My daughter and I are planning to make Maultaschen from scratch, M will make sausage rolls, and we'll have Lamb Stew for dinner.

We wish you all frohe Weihnachten!

Posted by Ami im Schwabenland at 13:24