Driving in Germany 4: I finally did it!!

The short version of today’s tale is that I drove all the way from our house to, into, and through Esslingen to get to my mother-in-law’s house and survived to write about it! This was a big step for me, because I truly hate driving over here. I love train travel, but it would admittedly be convenient if I could get over my terror. The problem isn’t that our car has a manual transmission – my Jetta in Wisconsin was stick-shift, too. It’s really more about a debilitating fear that Death is waiting for me in the form of an oncoming or merging Audi, Mercedes, or 18-wheeler. I also naturally do not want to screw up on the road and cause an accident that would inconvenience someone else’s plans for the day.

The whole experience was probably harder on my husband, who was sitting in the passenger seat and apparently had a phantom brake pedal at his feet as well as a door handle that doubled as a steering joystick. He first started a bit when I didn’t stop quite soon enough for his taste as I was backing out of the driveway and our park-assist-beepy-thing changed to a solid buzz. I only looked at him askance – I do this four times a week. THIS part, I can handle. So on we went.

I’ve driven the stretch from our house to the on ramp near Ergenzingen enough times that this was no big deal. And since this was Sunday, driving on the Autobahn wasn’t much of a problem either because trucks are not allowed on the Autobahn on weekends (which is why I chose today to see if I could make it to his mother’s house). I still had to navigate around Wohnwagen (campers) and buses while avoiding getting in the way of Porsches, Mercedes, and Audis peaking over the horizon in my rearview mirror, but at least there were no big trucks. Every five miles or so I had to unclench my fists from the steering wheel (one at a time, of course), shake out my knuckles, and check the cramps in my ankles, but happily I never actually lost feeling in any limbs.

In Wisconsin, for the most part everyone travels within a 10- or 15-mile speed zone – say, between 60 and 75 on the freeway and between 55 and 65 on highways. You get the odd nut from Illinois now and then, but generally the cars are going at predictable speeds. Here in Germany, especially in the sections of the Autobahn where there is no speed limit, you might have one car in the far right lane going 80 km/h (50 mph), a car in the middle lane going 120 (75 mph), and one in the right lane strolling along at 220 (132 mph). I learned today that I really like the zones in which the speed limit is 100 (62 mph), and I am also ok going 120 (75 mph). For about 13 seconds I tried 140 (87 mph), but then returned to a more reasonable speed.

There came a time when I wanted to get around a Wohnwagen, and I asked Martin if I had enough time before our exit. He said, “You still have 15 kilometers.” I silently wondered at what point I should tell him that “kilometer” really doesn’t mean shit to me. I’m bad at judging distances anyway, even in miles. But double-digits sounded safe enough, so after making sure there was not one single car anywhere in my rearview mirror, I sped up to 120 and passed the slow-moving vehicle.

The real fun began when we approached Esslingen. As we neared the city and my heart took on a new rhythm (changing from “nervous bunny” to “freaked out hummingbird”), I started to wonder if I should throw in the sponge and pull in to the McDonald’s we visited in 1998 (the last place I knew where I could pull over) to let Martin take the wheel. I only told him later what I was thinking: “Well, I don’t think I’m actually going to throw up; I just feel a little ‘off’. To hell with it! I can do this!” A new wave of nausea hit as I shot past the McDonald’s and headed for the steep drop around hairpin curves into the heart of downtown Esslingen.

So driving down into town, the speed limit around each hairpin curve was clearly marked: 20 km/h (12 mph). I dutifully slowed down, glad no one was behind me, and cautiously navigated the curve. This felt unusually slow, to be honest, and I almost asked Martin about it since I don’t remember him ever driving that slowly on this road even in the winter. But maybe it feels different in the passenger’s seat. He didn’t say anything, so I just kept on at 50 in the straight stretches, and 20 in the hairpin curves. Fast forward three hours to the three of us sitting on his mother’s balcony discussing the drive, and when I mentioned the speed limit in the curves was 20, Martin said, “Bei Nässe.” Oh. I didn’t see that part of the sign. Here it is: 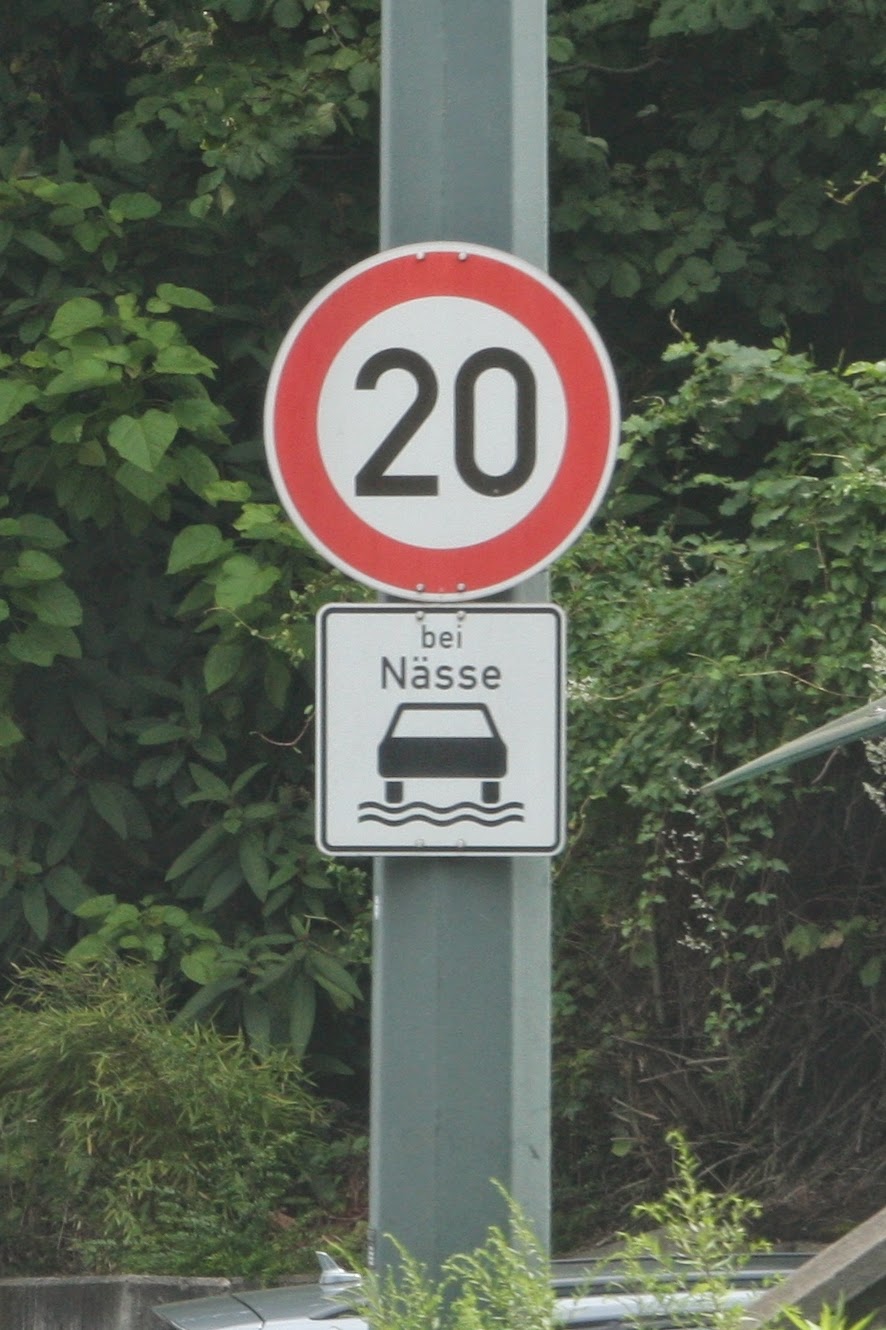 “Bei Nässe” means “when it’s wet.” It was a beautiful sunny day and the roads were bone dry.

Yeah, that’s the fun with German road signs. I like red. Red says, “Pay attention to what’s in this red circle!” But apparently I have to also take the time to read all the auxiliary shit on any signs attached to the main sign. I passed three signs telling me to go 20 around these curves, but never once saw the “bei Nässe” signs, which Martin assures me were attached to each one of them.

So then we drove on the “ring” that curves around the Altstadt, and headed up the cliff leading to his mother’s home. This is a 1½-mile stretch of steep, narrow, windy streets with cars parked on at least one side (sometimes both), buses and bicyclists coming in either direction, no stop signs, and cars occasionally coming from a road to the right to which I have to yield despite the lack of signs. All the other 348 times I’ve been in a car driving up those roads to her house, I’ve offered a silent prayer thanking my Maker that I did not have to be the one driving. (One winter Martin was driving up there, and two of the roads leading to her house were so slippery with freshly frozen rain that his car just slid right back down again.) The parked cars on each side of the road create a kind of slalom course which is all kinds of fun when an oncoming car approaches.

Though he was sweating, had a strained look on his face, kept banging at his phantom brake pedal and grasping his door handle, Martin did quite well. He knows I appreciate it if he tells me when I’ve missed a speed limit sign or when I’m in the wrong gear, and he gives me plenty of warning when I need to change lanes. But he drove home, and we both enjoyed the drive much more.

I’d like to say I’m looking forward to my next stint behind the wheel, but I’m not. Still, I made it over this frightening hurdle and it’s now behind me. I have several other challenges awaiting me:

Driving back from Esslingen
Driving to or from Esslingen on a week day
Driving into and parking in a parking garage
Driving out of a parking garage
Driving to and from a place other than Esslingen
Driving in a big city (Esslingen has only 90,000 inhabitants)
Driving with the radio on or a passenger talking
Overtaking a slow car on a two-lane road (I have already overtaken a tractor and a bicycle…)

Just for some extra fun, have a look at this photo. Do you spot the signs telling you that there is no longer a speed limit and you can drive as fast as your car can go?

What do you mean, "No?"! Click on the photo - it will get bigger. See them now? Oh, you think it doesn't matter because you wouldn't be driving that fast anyway? Oh, Dearie, it DOES matter. In these zones, keep your ass out of the far left lane if you value your and your passengers' lives. If you get stuck behind some slow guy, just stay the hell behind him. Oh, and don't pass on the right. It's illegal. 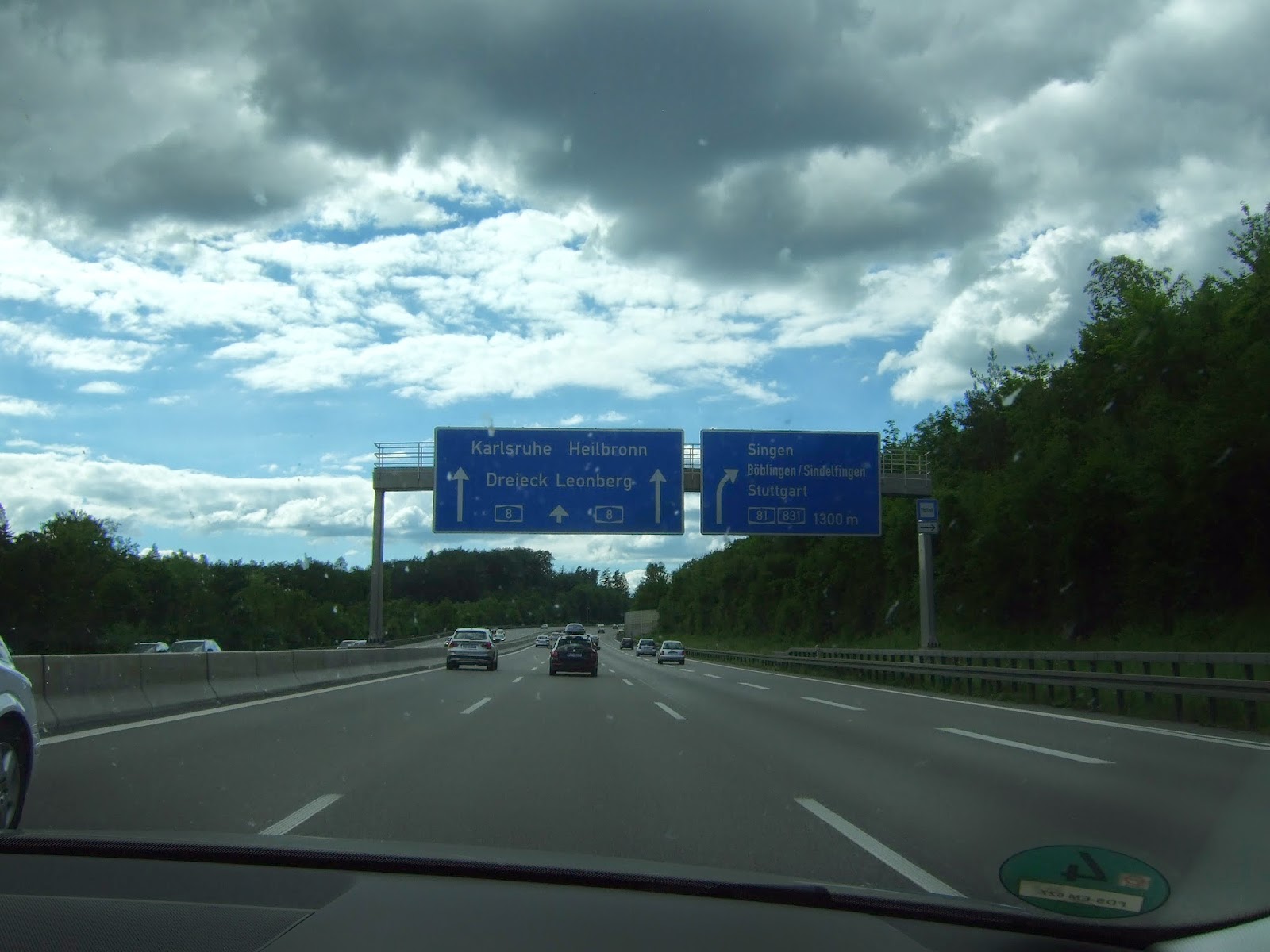 See the bumper of the car on the left? If it is going slower than Martin wants to go right now, despite the open hole in front of both of us and in all four lanes, Martin cannot pass him - at least not legally. He has to brake and hope that the other driver will notice that he doesn't belong in the passing lane, and merge right. Then Martin can merge left and get around him. In this particular instance, that car was passing us at some wicked speed. I just wanted to take a picture of how nice the Autobahn can look on a Sunday afternoon without trucks.
Posted by Ami im Schwabenland at 21:22