Honestly, I could probably devote the rest of my blog for the next few years to Esslingen. Even the locals appreciate Esslingen's charm and appeal, if the Facebook group "Du weißt, dass du Esslinger bist, wenn..." ("You know you're from Esslingen when...") is any measure. In talking to some people who have lived for years in Esslingen I have heard several versions of, "Ja, Esslingen hat scho 'was!" (Esslingen does certainly have something!") Good ol' Swabian compliment...

In Part 1 I wrote about two hidden secrets you can find in Esslingen if you are with an insider. Today I want to tell you about two or three more.

Do not skip a stop inside the Stadtkirche (Parish Church), and make sure you stroll all the way to the front to see the Hochaltar (High altar), which was finished in 1604. During Lent and Advent the altar is closed, but the rest of the year it is wide open. In both positions you will find beautiful paintings depicting scenes from the Bible. The altar was commissioned during the Reformation, but the artist followed classic examples or models from Catholic paintings. This led to Maria holding a central and prominent position in two of the scenes. This would have been unacceptable to the Protestants, of course, who recognize her as the virgin mother of Jesus but do not revere her as a saint. The artist, therefore, had to make adjustments to his depictions of Mary in order not to be fired...or worse.

The painting on the viewer's far right of the open altar shows the Pentecost scene (evidenced by the flames above the apostles' heads), and at the center of the group is the figure of Mary wearing a red dress and reaching upward. If you look closely you will notice that she has no head. Did the artist get distracted and forget to finish the painting? The trouble was that the painting was commissioned by the now Protestant leaders of the church, but the artist put Mary in the center as was common in Catholic paintings. When he realized his goof, he stopped painting her and hoped that her headless anonymity would not upset the Reformers.


On the same altar, but on a back panel that is visible during Advent and Lent when the altar wings are closed, is a painting of Mary's annunciation. She is seated at a reading desk and looking up toward the light coming through a window, which represents the angel Gabriel, and her bare right foot is visible under the hem of her cloak. Looking closely you will notice that she has six toes on this foot. The artist added the additional pinkie to portray Mary as handicapped, thus altering the Catholic idea of Mary as a perfect being. Although Mary is central (and, in fact, alone) in this painting, the Protestant church leaders who hired the artist did not object because she was deformed and therefore imperfect.

These paintings, by the way, are not famous and you will not find reprints of them or information about them on the internet. They were painted by one artist (Peter Riedlinger) and his apprentice only for this Hochaltar of the Stadtkirche in Esslingen.

In my first post about Esslingen I encouraged visitors to look down alleys and behind them as they walk the streets so as not to miss any beautiful views. Without a knowledgable guide, however, visitors will still miss juicy bits that may not even be known to some of the locals. Several of these curiosities are found near the Hafenmarkt. If you stand facing the yellow building which houses the Stadtmuseum, look left (roughly north toward the Burg) and you'll see a very narrow break between two buildings with a rounded gate blocking the alley. Walk toward the gate and notice that the street slants up as you walk. If you peek over the gate and between the buildings, you will see a corner of the building on the right - the Bebenhauser Pfleghof - which "dangles" above the alley. This is Esslingen's oldest outhouse. But wait - where does the...er...waste go? Luckily this privy isn't used anymore, but as you're starting to figure out, the waste fell onto the alley which emerged into the road about where you're standing, and anything not solid ran down through the market square. 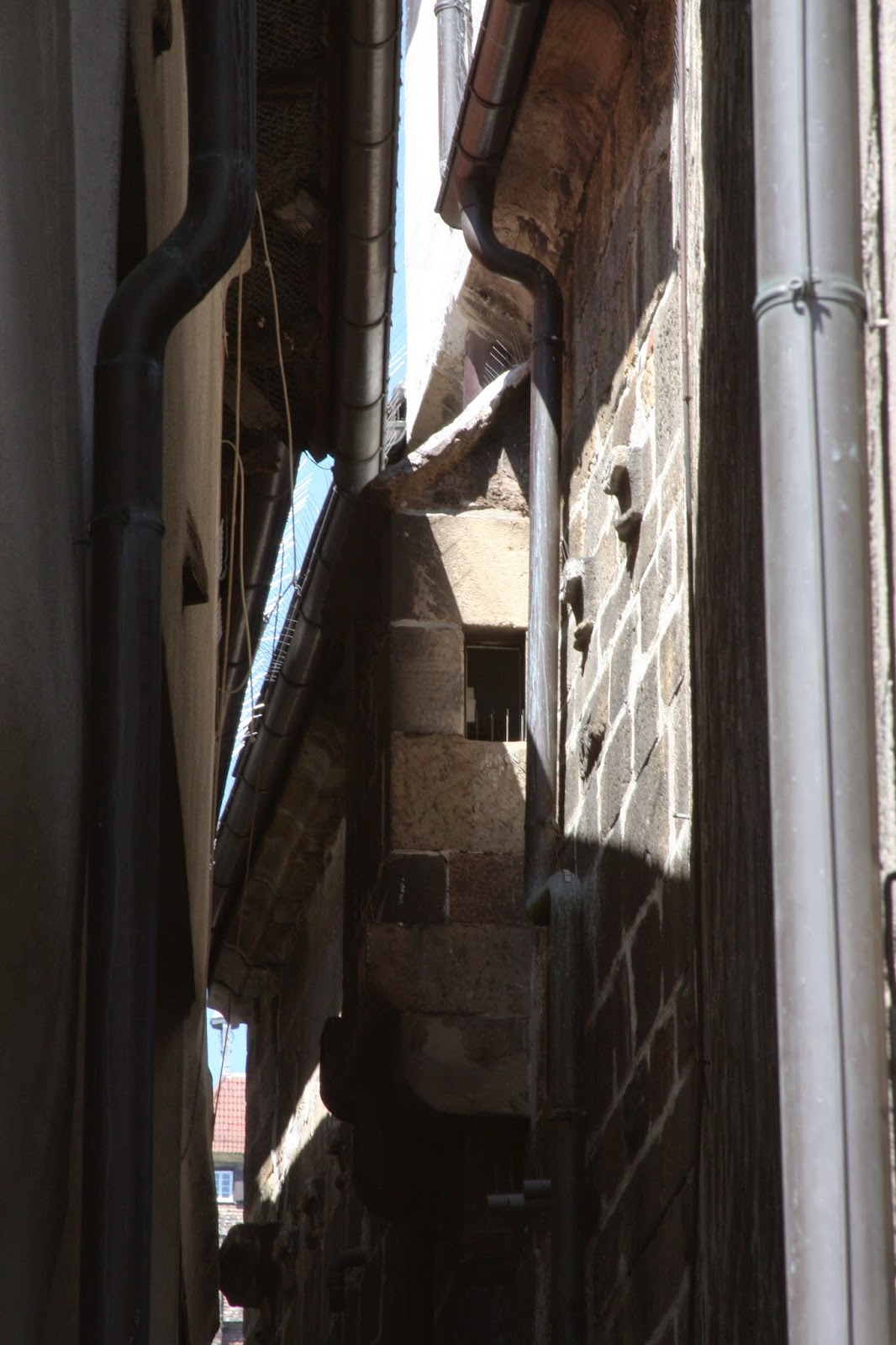 In the Middle Ages people emptied chamber pots out their windows, usually remembering to shout a warning first, animals large and small relieved themselves in the streets, the homeless found themselves a corner to use, and the truly privileged had such luxury as this elevated outhouse on the Bebenhauser Pfleghof. Winkelfegen was an occupation back then, which translates to "corner sweeping," but which really meant cleaning the streets of human and animal waste. The Winkelfeger had to work in shifts at night as well as during the day so that the townspeople would not be too tormented by the stench.

The people living and working in the Bebenhauser Pfleghof had quite finicky noses, and they complained to the city that their neighbor emptied his chamber pot too close to their building - so close, in fact, that some of the waste seeped into and caused damage to their cellar. As a result of the complaint the city passed a law stating that waste had to be disposed of at least "two shoes" distance away from the Pfleghof and had to be cleaned away at least every 14 days. In 1480, however, the use of such a privy as the one still evident on the Bebenhauser Pfleghof was also forbidden and would result in a fine. Although in the 14th century many of the streets in Esslingen had been paved, it was still very difficult to keep the streets clean. By the 17th century the streets were being cleaned of waste and garbage every week, but it doesn't take much effort to imagine how unpleasant a walk through the town on a hot summer day could be.

Today, however, Esslingen's Stadtmitte (city center) is clean and great for shopping, though there are no touristy shops there - the kind you find in Rothenburg ob der Tauber and Rüdesheim on the Rhein. The shops in  Esslingen sell things that real Germans buy. If you want to take something home to prove you were there, such as a mug, shirt, or umbrella, check out the Stadtinfo (Information Office) at Marktplatz 16. You can book a guided tour, take a canoe ride on the Neckar canals, explore the city on your own, visit a museum, talk to the locals, and if you enjoy photography, Esslingen will be a feast for your lens.

A note to Americans: If you are visiting in July or August when it can get very warm in the city, do not expect to find the icy relief of air conditioning in stores and restaurants. Air conditioning is a huge energy waster for people who accept that when it's hot, we'll be warm and might sweat, and Germans consider the abrupt change in temperature from the warm outside air to dry and chilled inside air exceedingly unhealthy. Most homes are not equipped with central air, nor are small inns. If you need air conditioning for sleeping, you'll want to book a room at a more expensive hotel. Some buses have a/c and some do not. If you're feeling oppressed by the heat, the best place to get some relief is in a big stone medieval church.