I'm pretty sure the most beautiful town in Germany is Esslingen. Yes, yes, that's just my opinion, but despite the many pretty towns, important cities, and charming places I've been to in Germany, there is no place that wows me quite like Esslingen. It has a rich history, breath-taking landmarks, ten sister cities around the world, a summer Zwiebelfest (onion festival) and an incomparable Christmas and Medieval market in December. While most Americans who travel through Germany go to the familiar tourist traps of Heidelberg and Rothenburg and then the big cities of München or Berlin (which are great places to visit as well), I will always recommend Esslingen when one of my Landsleute asks me where he or she should go. Esslingen has unbeatable charm, fabulous restaurants, fascinating buildings, and interesting and personable residents, but it is not a big city, nor is it chock-full of tourists. If you want to see an authentic and lovely German town, go to Esslingen. 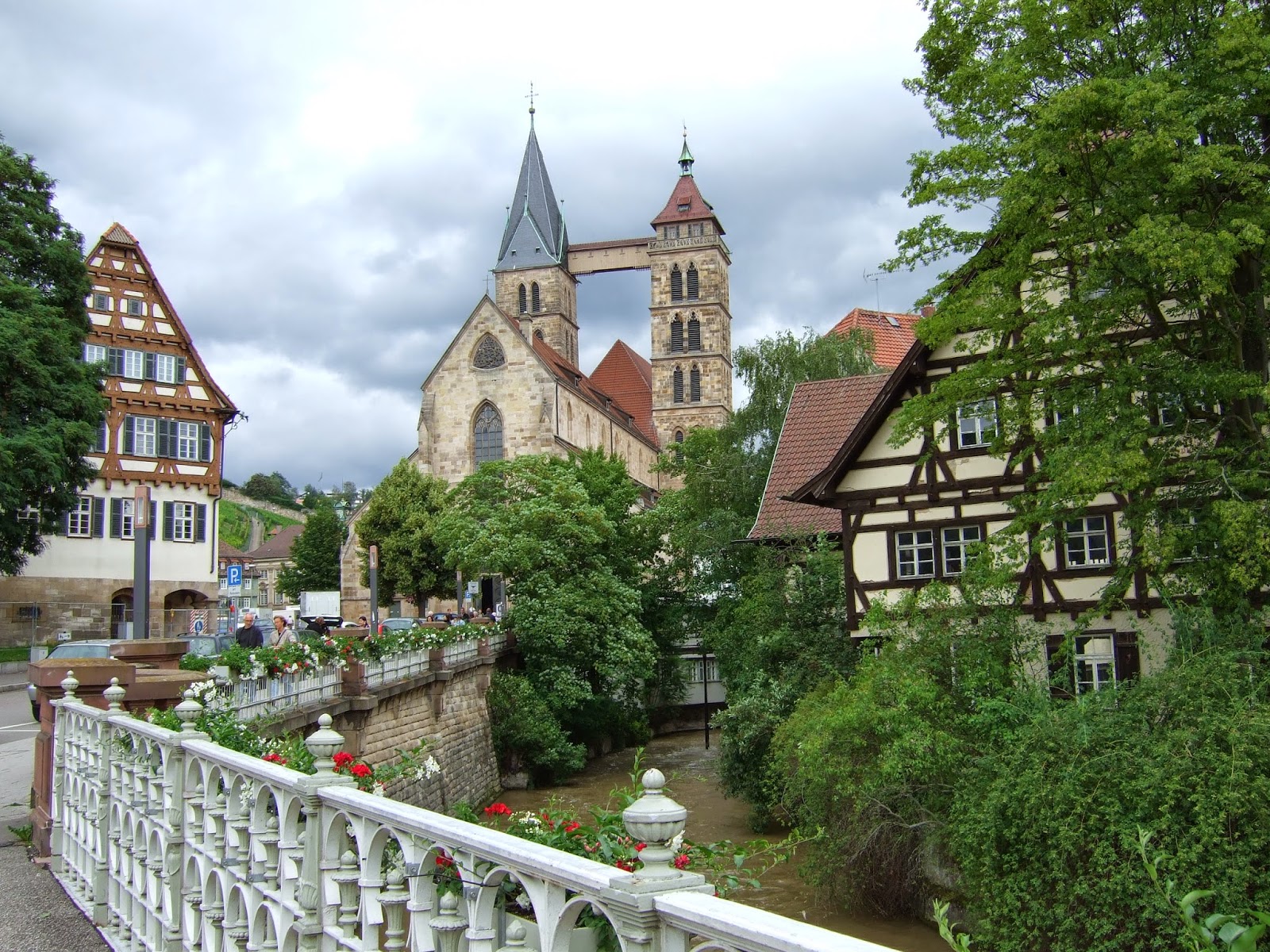 There is hardly a corner in the Esslingen Altstadt (old part of town) that isn't worth photographing, and you won't have wasted your time if all you do is stroll around looking at the buildings, fountains, monuments, alleys, cobblestone pedestrian zones, canals, bridges, half-timbered houses, and even the cemeteries. As you do so, don't forget to look behind you and down side streets; often a beautiful building or alley looks even more stunning from the other direction. I lived in Esslingen for 5 1/2 months as an exchange student when I was 17 and have spent countless days and nights there in the 28 years since then, but still I cannot get enough of the allure of this town.

In a previous post I mentioned the brilliant book series Geheimnisse der Heimat, by Eva-Maria Bast and Heike Thissen. One of their volumes is about Esslingen, in which they explore and describe 50 secrets found in and around Esslingen. Between this book and my mother-in-law, who is one of the city tour guides, I have learned a lot about my favorite city and discovered that there is much I still haven't seen! In this post I want to share a few of the tantalizing secrets of Esslingen.

Esslingen was first referred to in the last will & testament of Abbot Fulrad in the year 777 A.D., so it's basically 1000 years older than the U.S.. An impressive section of the medieval town wall (the Burg) is visible on a hill overlooking the city, and three of the original city gates still exist. The imposing Stadtkirche, with its asymmetrical twin steeples, is one of the oldest structures in Esslingen, the building of it having begun around 1210 - though the church we see today is the third church that was built on that site. The unforgettable Rathaus, depicted in the children's book written by the singer Madonna because her Russian illustrator had visited and adored Esslingen, is of course one of the most photographed buildings in the city.

In the Protestant Frauenkirche, hidden behind a closed and latched flap which is part of the Chorgestühl (choir stalls), is a beautiful old painting which takes one back to the days before the Reformation. It depicts the deathbed scene of St. Alexius, which is shown by the paper the dying man holds in his hand with his name on it. Legend has it that Alexius, son of a wealthy Roman senator, fled on the eve of his wedding and lived for 17 years in Syrian Edessa as a beggar. He was eventually recognized and returned to his father's home. His father did not recognize him because of the condition of his clothing and his strange behavior, but he allowed him to live under the stairs where he survived on discarded kitchen scraps. He lived like this another 17 years, and only as he lay dying did he reveal a letter proving his identity. Kaiser Honorius (in some versions of the story it was the Pope) was the only person able to remove the letter from Alexius' hand. Alexius is the patron saint of pilgrims, beggars, and the ill.

Why is the painting hidden? No one is certain, but the fact that it is hidden explains why it exists at all. In the Middle Ages, most common people could not read, and the Bible was not available in German anyway. The artwork in and around churches allowed people to understand the stories, messages, and warnings from the Bible as well as stories about the lives of the saints. During the Reformation, which swept into Esslingen in January 1532, most of these magnificent and informative ornaments - paintings, statues, frescoes, sculptures, carvings - were removed from churches, painted over, wiped away, or destroyed. The Reformers were of the mind that such finery and ornamentation distracted worshippers from the true Word, which was spoken by the pastors during their sermons. The Protestants turned churches into plain, dull, whitewashed lecture halls. Ambrosius Blarer, after whom the square Blarerplatz is named, was personally responsible for making sure not a single painting or sculpture remained in Esslingen.

In the Frauenkirche, however, this one fresco survived. What saved the painting is not known. Possibly Blarer and his crew didn't see it because it was hidden behind the choir stall and the trap door was and is not obviously visible. Less likely is that he tolerated it because it was completely covered by the choir stalls and the secret door was latched. In any case, if you know where to look, you can find this once secret painting which dates back to 1345.

At the intersection of the Innere Brücke, Ritterstraße, and Milchstraße stands a stone fountain whose carvings depict a legend that nearly every Esslinger knows. In 1491 a rich man from Esslingen was murdered near Stuttgart, but the murderer was never caught. Two years later a postman, Michel Banhard, discovered a ring at the location where the murder had taken place, though he was unaware of the crime. He put the ring on his finger with the intention of bringing it to the "lost and found" office in Esslingen. He made the unfortunate decision to stop in an inn first, the ring on his finger was recognized, and he was accused of murder and theft. Michel was thrown into jail and tortured, and as was and is so often the result of torture, he confessed to the crime to stop the pain although he was innocent. He was sentenced to death by beheading, but before the sword fell, Michel blew his horn one last time and declared to the onlookers that he would return every year until the real murderer was found. For the next 50 years, at the close of each Michaelistag (St. Michael's Day; 29. September) Michel did appear on horseback carrying his severed head under his arm, haunting and terrifying the people of Esslingen. Finally one dreary night the figure of Michel appeared to the nephew and heir of the murdered wealthy man, who buckled and finally confessed to murdering his uncle. The postman Michel finally had his peace and did not return.

Apparently, however, there is not a grain of truth to this delicious legend. It was fabricated by a storyteller in the 1840s named Munder, in a time when people were rediscovering an appreciation for and interest in the Middle Ages. The Chief Prosecutor at the time, Robert von Hecker, was enthralled with the story and donated money posthumously to have a monument erected to the postman, not realizing the legend was a fake. The artist Emil Kiemlen chiseled the base of the stone fountain with scenes from the story and topped the fountain with the figure of the postman Michel on his horse blowing his horn (head still firmly attached). Had Hecker not commissioned this fountain, it is likely the story would have been forgotten. And even if the story was made up, every time it is told by an Esslinger, a tour guide, or a blogger, the message is heard that justice, even if delayed, will eventually be served. 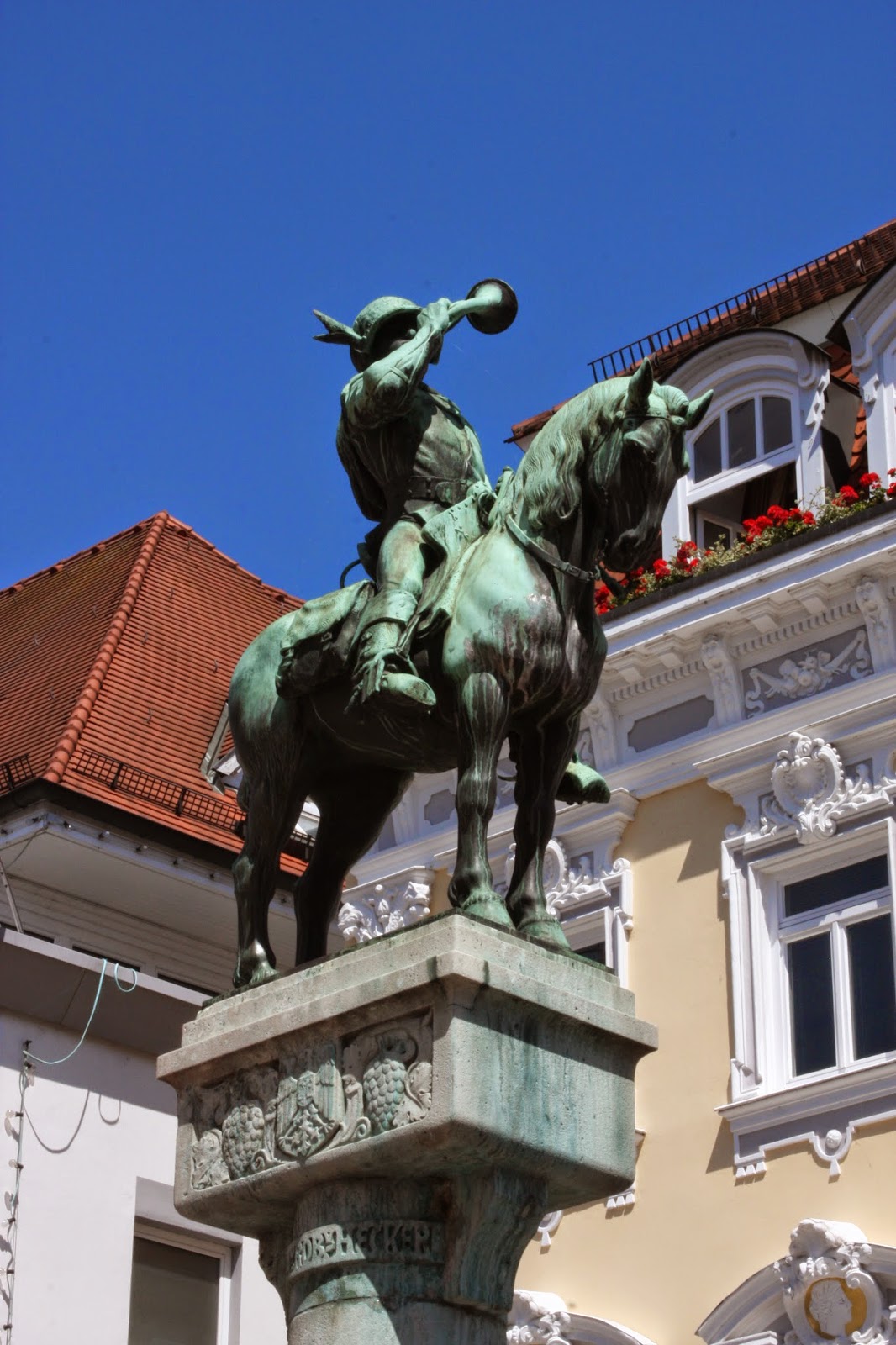 
Update: August, 2014:
I have added this post to the Expats Blog Hop Travel Edition at Young Germany. You can view other entries here.

Posted by Ami im Schwabenland at 19:39