I know you were expecting me to go straight to the Autobahn with this posting, but I'm not ready for that yet.  Let's start with the beginner's course.

In order to drive in Germany, it is a good idea to get to know the rules of the road first, or at least have some idea of them.  There is - as would be expected - considerable order on German roads, logical rules and laws, and the assumption that everyone not only knows the rules, but will follow them.  Road signs are made up more of symbols than words, whereas American road signs include lots of words. 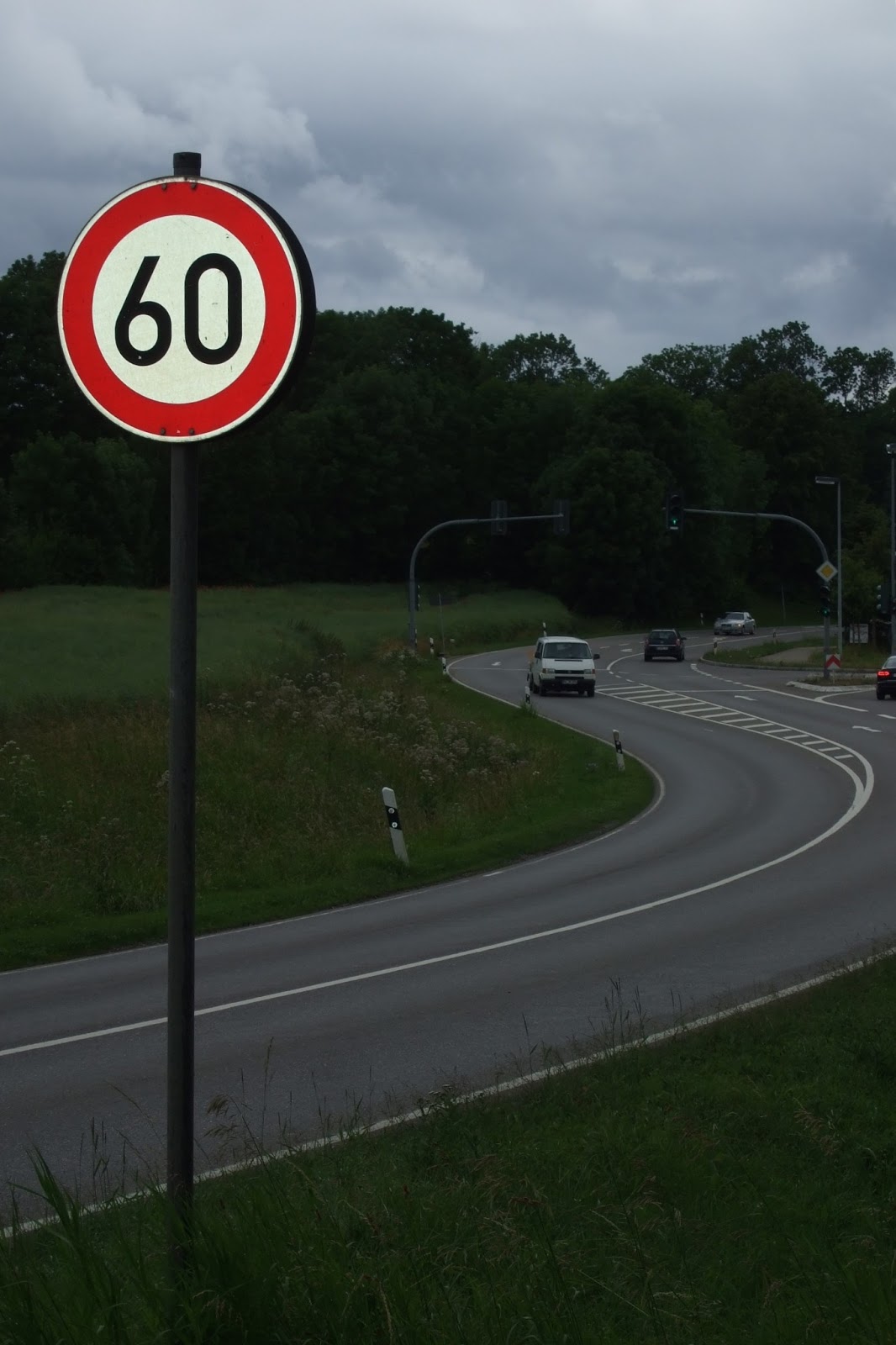 This is (relatively) clearly a sign indicating that the speed limit as of that point is 60 km/h. A red border tells drivers that something within the border isn't allowed - in this case, going faster than 60. 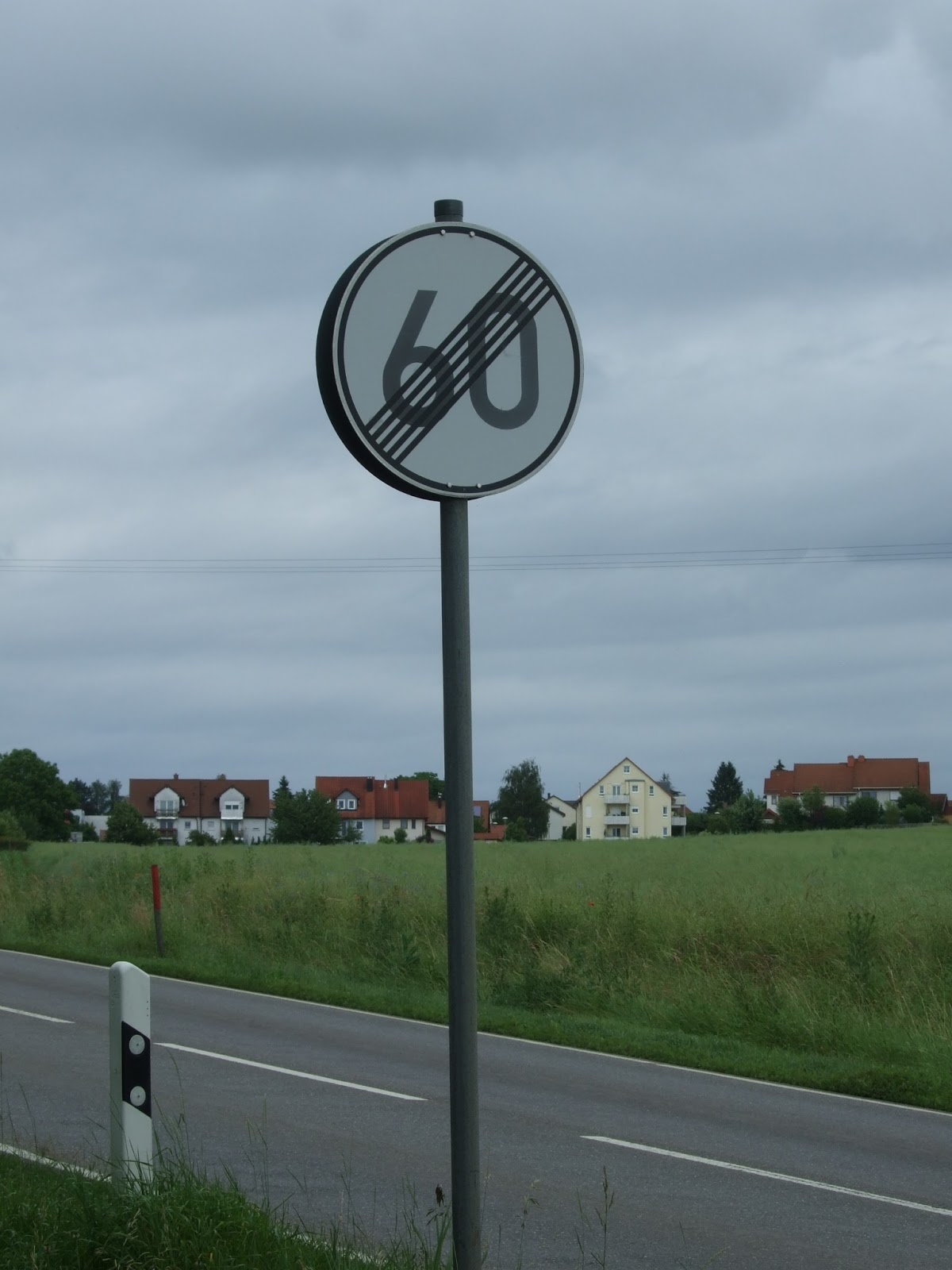 This sign means that the Geschwindigkeitsgrenze (speed limit) is no longer 60 km/h.  Uh...What IS the speed limit? Well you should know.  Naturally it depends upon the type of road you are on. In this particular place on this narrow, busy road without shoulders, the speed limit is 100 km/h. You are supposed to know this because it is a "Bundesstrasse," or federal highway. Its name (B14) indicates that with the B.

So you continue driving along, being on the lookout for another sign with a red circle and a number, see none, but the guy in front of you has suddenly slowed to 52 or so.  That's because you're now within city or town limits. Didn't you see the sign?? 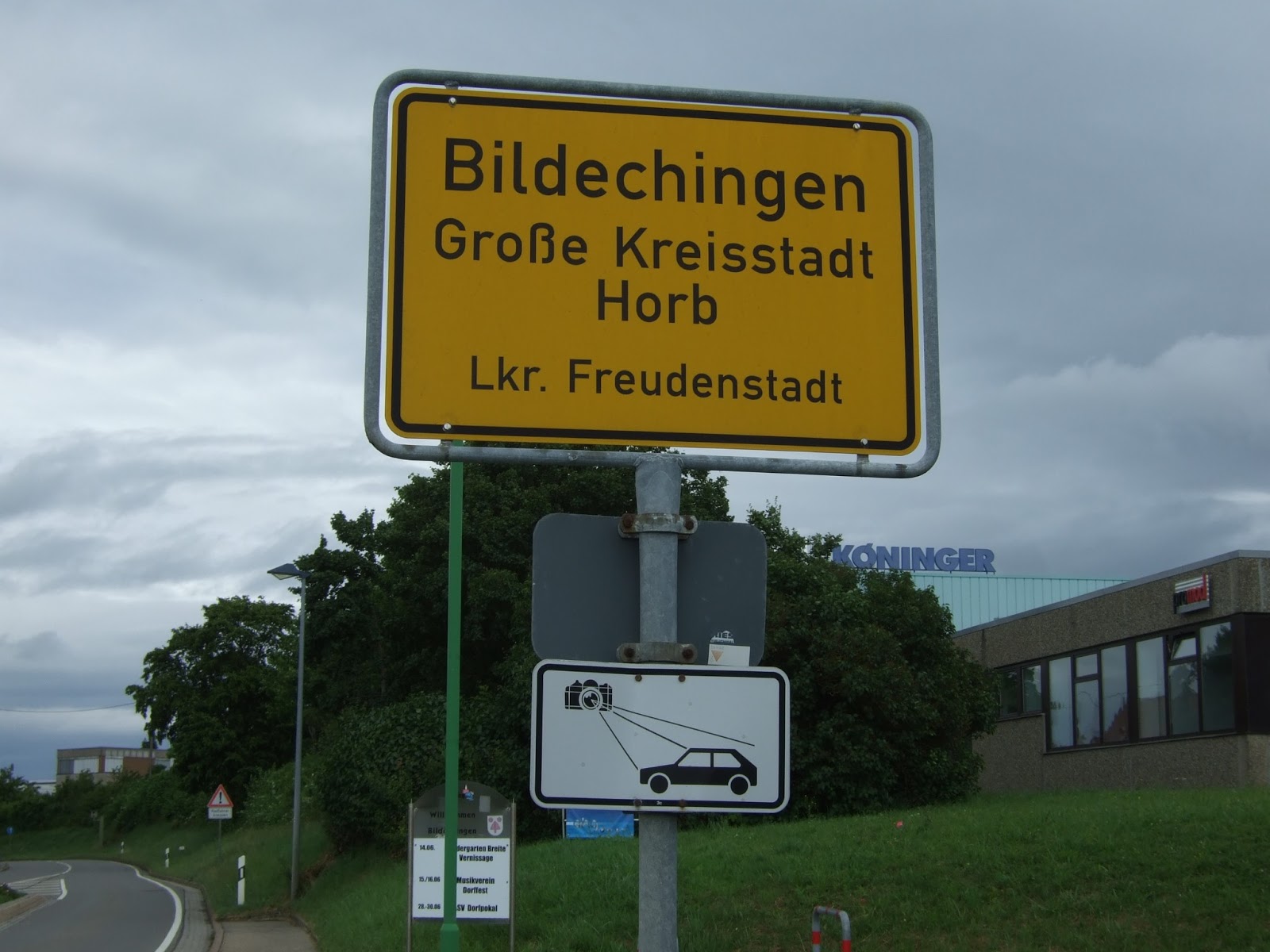 Yep, that's it. When you see the rectangular yellow sign telling you the name of the city or town you are entering, you should automatically know that the speed limit is now 50 km/h.  And, and by the way, if you didn't know that and weren't lucky enough to have the German driver slowing down in front of you, you'll probably get caught by the speed camera (see the white sign below the yellow one? Consider yourself warned.).

Ok, so you turn off the B14 onto another narrow (by American standards) road and didn't see any other sign. Assume the speed limit is still 50. When you get to a residential area, you'll see this sign:
"Zone" means that the speed limit applies to the entire neighborhood. If you weren't looking up and missed the sign, perhaps you'll see this on the road: 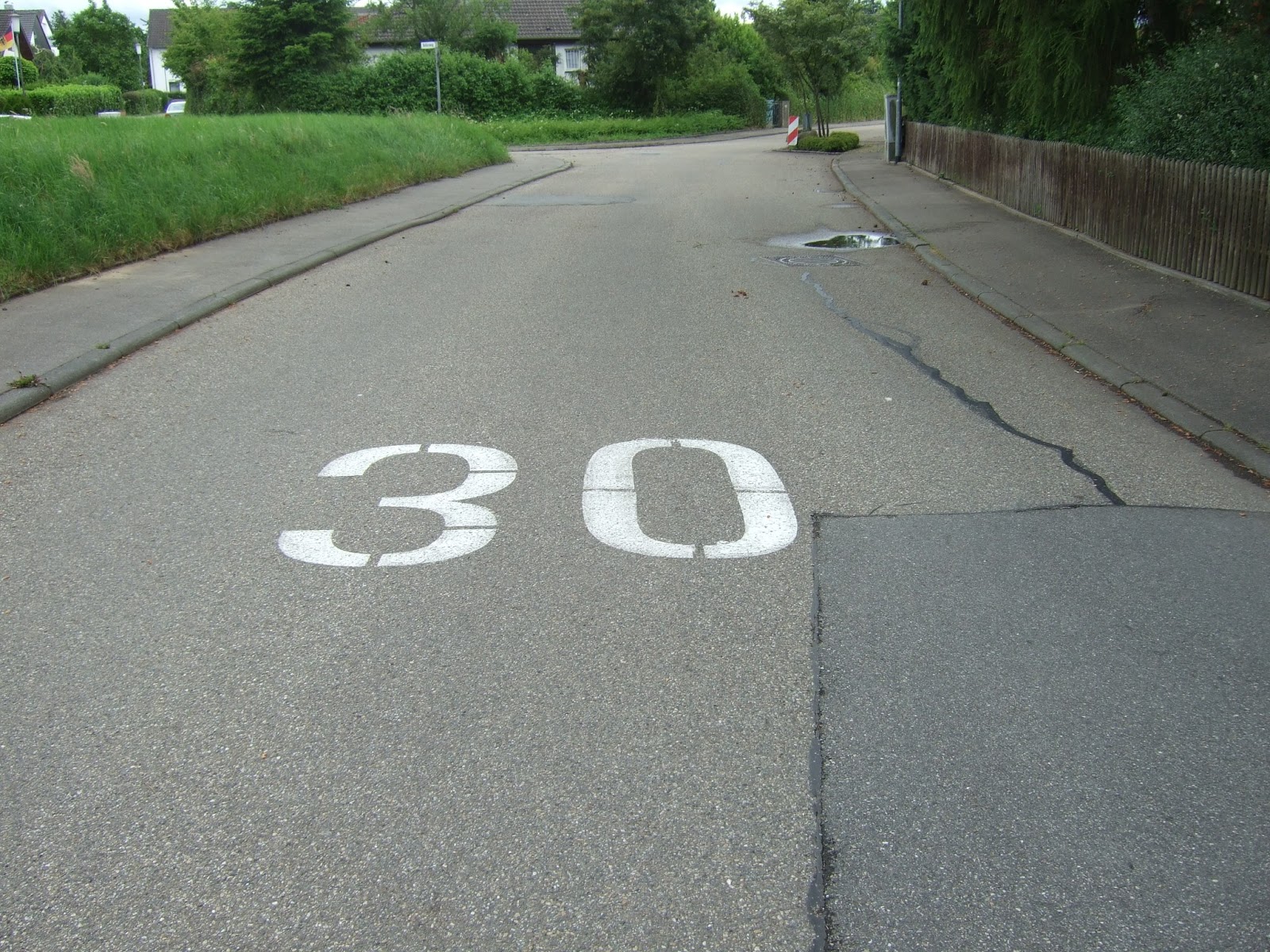 The streets are so narrow here that you wouldn't really want to go faster than 30 anyway. And of course there are often cars or small trucks parked on the sides of the narrow streets, so occasionally you have to drive partially on the sidewalk to get through.

Luckily the curbs are low. 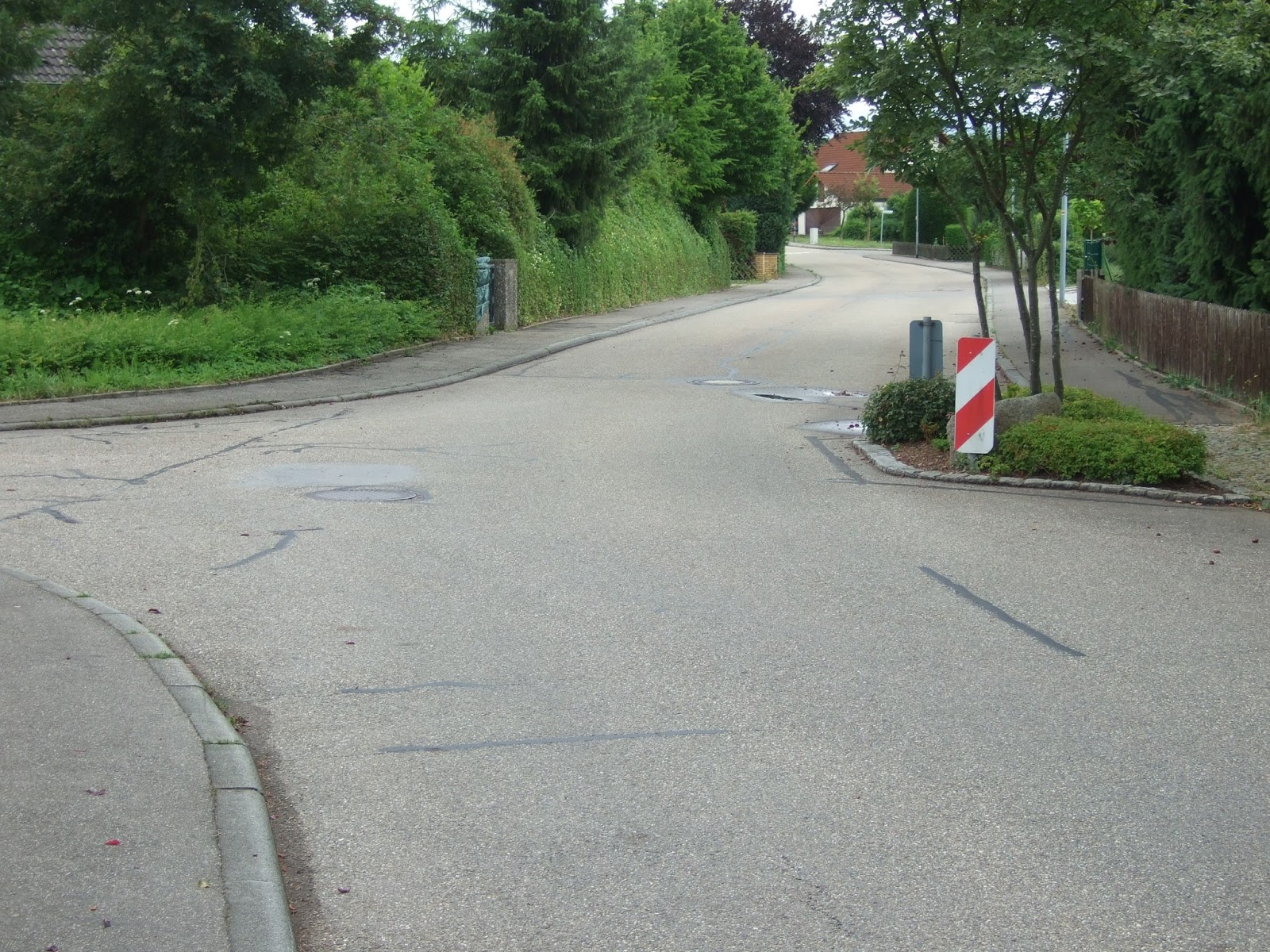 For those cocky youngsters who forget to use their heads, the German road designers are there to remind them with the German equivalent of a speed bump (at the red-and-white sign to the right):

It makes the street even narrower in that spot where there is a T-intersection - or wherever else they felt one was needed - and drivers are forced to slow down and navigate around it.

Oh, and that brings me to intersections.

So let's take a look at this intersection: 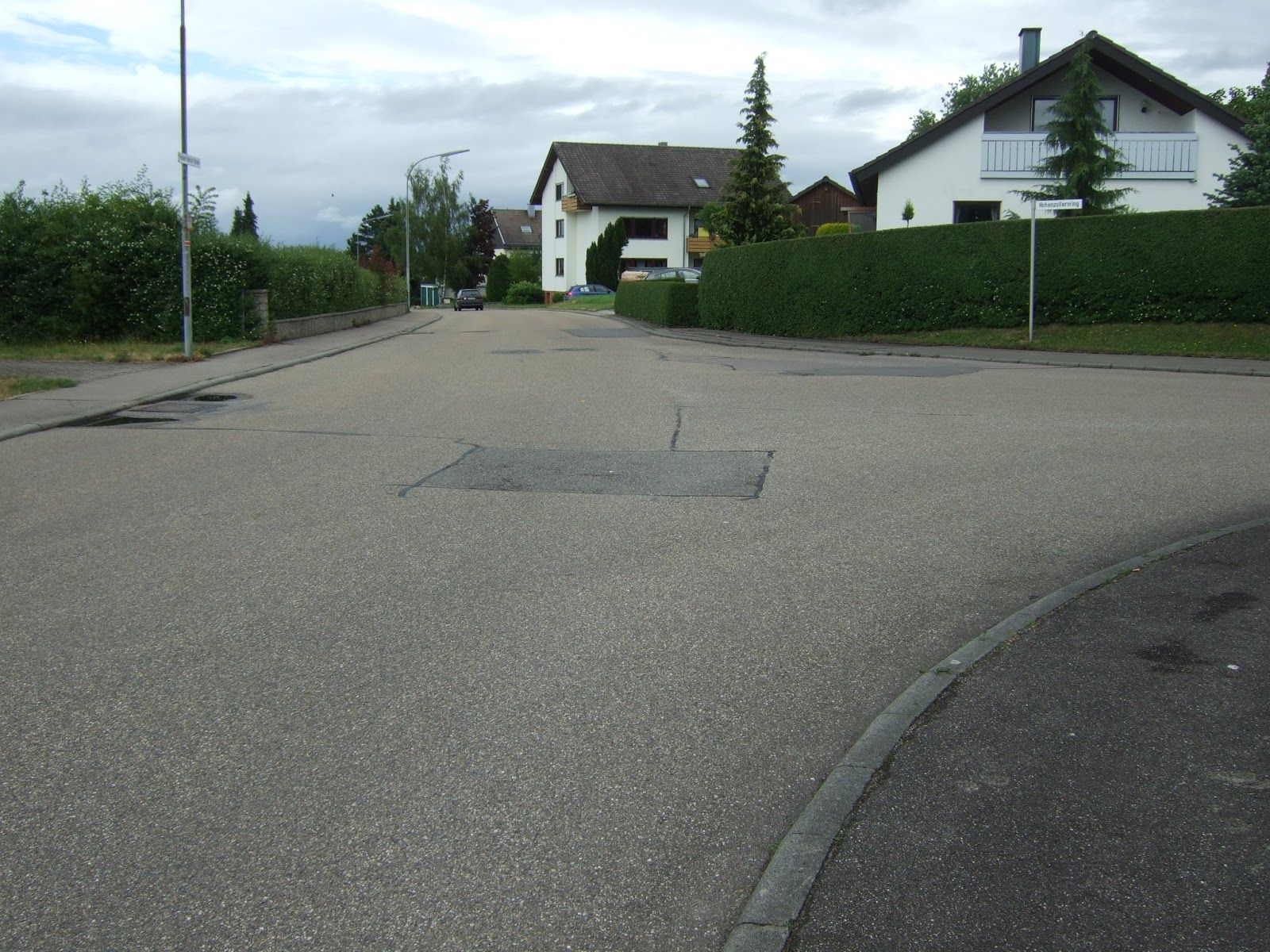 I'm driving along, and a car comes from the right. I wish you could see that there are tall trees to the right, and therefore I can't see the approaching car until I am almost in the intersection. I just have to automatically slow down, despite the lack of sign, and cautiously cross the intersection if no one is coming from the right.

Regarding the lack of sign reminding me to yield to the right, the Germans only have signs telling drivers when they don't have to yield to drivers from the right.  Come to think of it, in the bigger cities there are sometimes gray diamonds painted on the road at intersections. Those are reminders of the "rechts vor links" rule.

Usually when I am the one coming from the right here, I revert to my instincts and stop when someone is coming from the left (because that is the wider and more major street). German drivers love this kind of chaos on the road.

One more thing American drivers need to keep in mind when driving here in Germany is that there is no "right on red" allowance. A red light means "Stop!", not "Stop, and then go."** For whatever reason, that is an easy one for me.  I'm a nervous enough driver that I'll happily sit at a red light as long as I need to.

Although I'm slowly but surely learning the rules of German roads in anticipation of someday having the guts to drive further than the grocery store, I still prefer to take the train.  I think that's better for all concerned.


**My husband has just informed me that there is one intersection in Esslingen where one is allowed to turn right on red. Apparently there is a green sign with a white arrow pointing right to let drivers know it's ok. So I stand corrected.
Posted by Ami im Schwabenland at 17:39