No blog about living in Swabia would be complete without mention of the Kehrwoche. There is no one-word translation of this, only an explanation. According to dict.cc, it is the "rotating time period during which a resident of e.g. an apartment is responsible for cleaning shared areas in and around the building such as sidewalks, driveways, hallways, etc.". The Kehrwoche has its roots in a municipal law of Stuttgart from 1492! (http://www.schwaebisch-schwaetza.de/schwaebische_kehrwoche_I.htm)

So what that means is that if you live in an apartment building, you will be responsible during the course of one week for keeping common areas clean and tidy. This involves sweeping, dusting, and sometimes washing stairs, railings, sidewalks, entryways, landings of stairs, etc.. How often this responsibility falls to you depends on how many families are living in your building. You have the responsibility for a whole week, so you need to keep your eye on how things look, but the expectation is that you'll take care of this on the first Saturday (morning, preferably) of your week.

Most apartment houses have a sign that is passed from one apartment to the next, so you'll probably find it hanging on your doorknob by Friday evening to remind you to get to it the next day.

The result of the Kehrwoche is that apartment houses and the area in front of them to the road almost always look nice and tidy. You will often see someone sweeping the sidewalk (even sometimes the road!) in front of a building. Swabians take pride in the appearance of their homes, gardens, sidewalks, driveways, and streets, and so they take the time to keep things tidy. Those who don't care about this (usually transplants from other parts of world) are compelled to care, or at least cooperate.

Does this mean that you might have to clean up someone else's mess?? Yes, it could mean that. But since everyone in the building rotates the responsibility, everyone also tends to respect the common areas. No one wants to clean up someone else's mess - or face the distain of their neighbors for being untidy - and so residents tend to clean up after themselves as needed. If it's not my Kehrwoche but I leave a trail of mud behind me when I come in from a walk, I'll clean it up. And folks typically use the mats in front of the doors to clean off their shoes before they enter.

It's a good way to teach kids about cleanliness, too. "If you sass me one more time, you're doing Kehrwoche before your soccer game!" A child who tromps in with muddy shoes earns the job the next time it comes around. And for Mother's Day, children can give a great gift that costs nothing more than time: "We'll do the Kehrwoche for the next three months, Mom!"

We live in a house rather than an apartment, but we still participate in the Kehrwoche. Although it usually slips my notice, Martin comments about once a week about the leaves and sticks the silly birds push onto the sidewalk as they grub around in our hedge (see below). 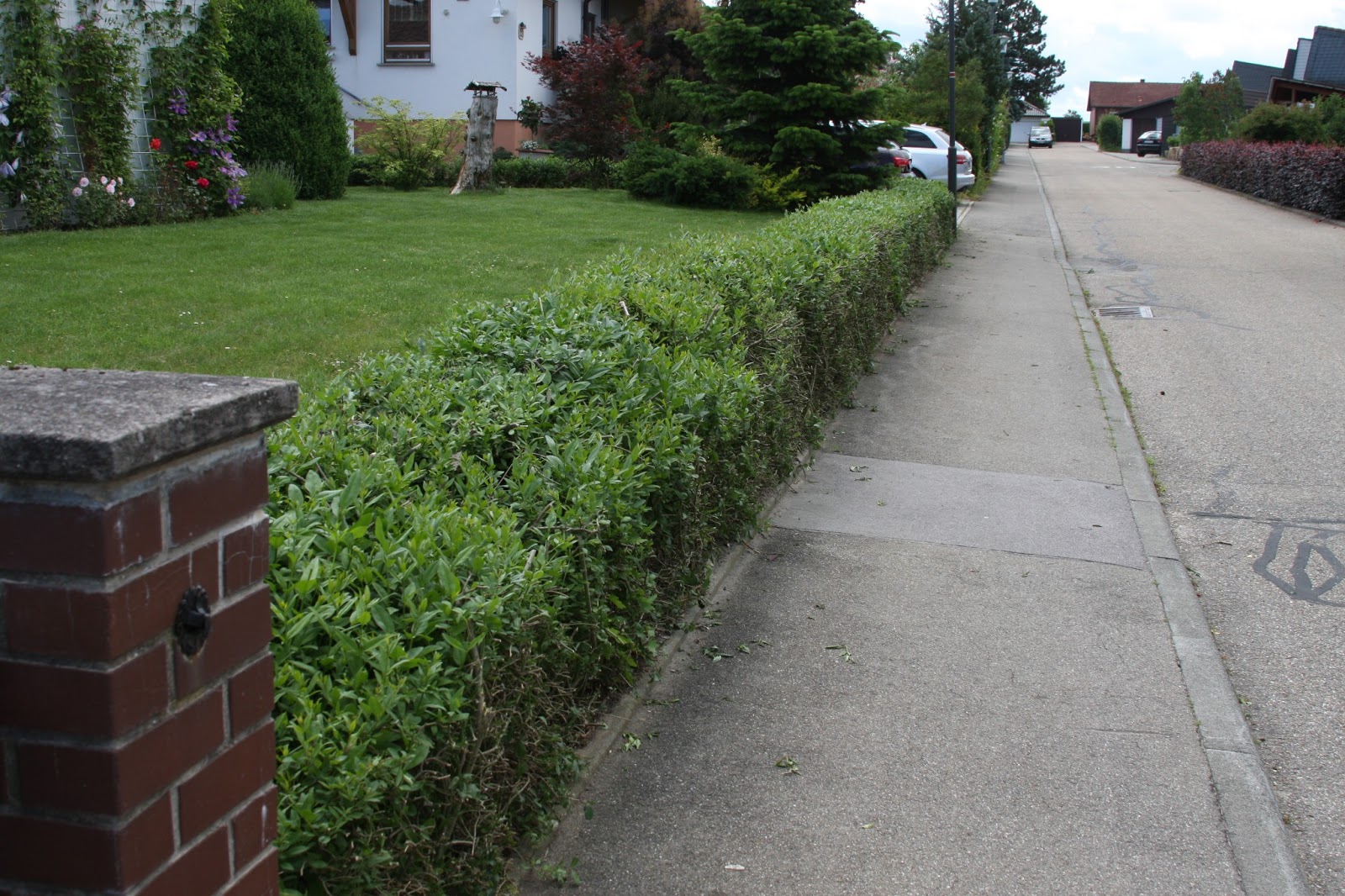 True, it doesn't look like much, but on Saturday afternoon when I look down our road, I assure you ours is the messiest sidewalk within eyesight. It's just something that one does here; if you live in Swabia, sweep your sidewalk. It's not too much to ask.

Now, people in Berlin have made fun of Swabians who have moved to the big city and brought their Kehrwoche tradition with them. Wolfgang Thierse, the VP of the Bundestag (German Parliament) scoffed with distain at the Swabians living near him in Prenzlauer Berg who cling to their Kehrwoche and dialect (they have the audacity to call Schrippen (rolls) "Weckle" (rolls), for heavens sake!), saying that these people should finally accept that they're living in Berlin and not Swabia anymore - or maybe they should go back where they came from!  (Really? An elected official in 2012 told people who are different from him to assimilate or get out? Ouch.) The Swabians of Prenzlauer Berg responded by showering a statue near Thierse's home with Spätzle (homemade Swabian noodles). The action was called the "Spätzle-Anschlag" (homemade-noodle-attack). My guess is someone was hired to clean up that mess.

And there, perhaps, is one of the reasons for the Kehrwoche. As I have written previously, one of the qualities of most Swabians is frugality. They work hard for their money and don't easily pass it on to someone else for doing something they are perfectly capable of doing themselves. Personally, I see nothing wrong with this way of thinking. Yes, we could pay someone to wash our car, and perhaps we would if we were infirm. But we're not. It just takes time, and this is another chore that Swabians tend to do on Saturdays. I could pay extra at the local butcher and have them deliver our meat, but as long as my legs still work, I'll spend the 20 minutes it takes to walk there and back. I could hire a Putzfrau, or cleaning lady, (and I admit, that is tempting), but while I have the time and ability, I'll keep cleaning my own house.

The phrase "Time is money" could be interpreted by a Swabian to mean "Time spent is money saved!"

And for those in Berlin who laugh at Swabian frugality and hire cleaning services to take care of what Swabians do themselves, I'd remind them that Baden-Württemberg is one of the three states that pay in  to Germany's "financial rebalancing system," and Berlin is not.  In fact, Berlin is the biggest recipient/taker of this system.

So, Mr. Thierse, we'll keep our Kehrwoche, thank you very much. Perhaps you and your cronies could learn something from Swabians and their self-sufficient natures. Judging from the current state of financial affairs around the globe, the world could use more people who know how to be frugal!