I'll probably never become the good Swabian housewife I'd like to be - hard-working, an excellent cook, able to remove every stain from any piece of clothing, frugal, stoic, firm of will, and humble to a fault - but I have made Maultaschen from scratch!  With the help of detailed instructions and photos from my German host parents (with whom I lived for six months as an exchange student in 1986), I gathered my courage and tackled the project.

There are quite a few stories attached to this typical Swabian dish, and even more recipes for it and ways to serve them.  For those of you who have never heard of these, the name translates most closely to "Snout Pockets" or "Mouth Bags".  The affectionate nickname they've earned is "Herrgotts-B'scheißerle", which only roughly translates to "Lord God bullshitters". The explanation I like best is that Cistercian monks created these ravioli-like pockets to eat on Fridays during Lent when meat was forbidden. The ground beef, ground pork, and sausage meat were mixed with so much spinach and parsley that the mixure looked rather more green than meat-colored, and therefore the cheeky monks could fool God into thinking they were following His law and not eating meat. Besides the color, the meat (ähm...vegetable) mixture was tucked inside of a noodle pocket and usually served in a broth, disguising it all the more.

If there is any truth to that story, it's clear why the name given to the dish had to be rather ambiguous. "Sausage Pockets" might sound better, but that would hardly have fooled God.

So how does one make these delicious Snout Pockets (which I will hereafter call by their proper name out of deference)?  First of all, if you do not have a long, empty counter on which you can roll out the dough to about 1.5 meters and several hours of time, just quit now.  But if you do....

This is a family recipe passed down from my German host father's mother, and I was so pleased when my host parents were willing to share it with me!

Here are the ingredients for about 40-45 Maultaschen:
500g noodle dough (pre-ordered from the baker)
1 kg mixed ground beef & pork
250-300g sausage meat
5 day-old Kaiser rolls (that's 5 rolls that are 1 day old, not rolls that are 5 days old)
6 eggs
Spinach - as much as you like - frozen, chopped, unseasoned (thawed)
1 onion
a generous amount of parsley
Salt, pepper, and nutmeg

Chop the onions finely and lightly braise them in butter. Add the parsley and braise briefly.
Cook the spinach and press it through a sieve or strainer.
Soak/soften the rolls in cold water, then press the water out and rip them apart into very small pieces.

Knead all the ingredients together in a large bowl; it is best to do this by hand rather than trying to use a wooden spoon or mixer! The mass/mixture should have a firm, homogeneous consistency. If it is too soft, add some bread crumbs. If it's too firm, add another egg.

Here's a hard part, which my German sister says she hates doing, but which must be done: taste the raw mixture.  It should be rather too seasoned than not seasoned enough.  Add more of whatever seasoning/s is or are missing.

Roll out the noodle dough on the counter and spread the meat mixture evenly over the top (see below). 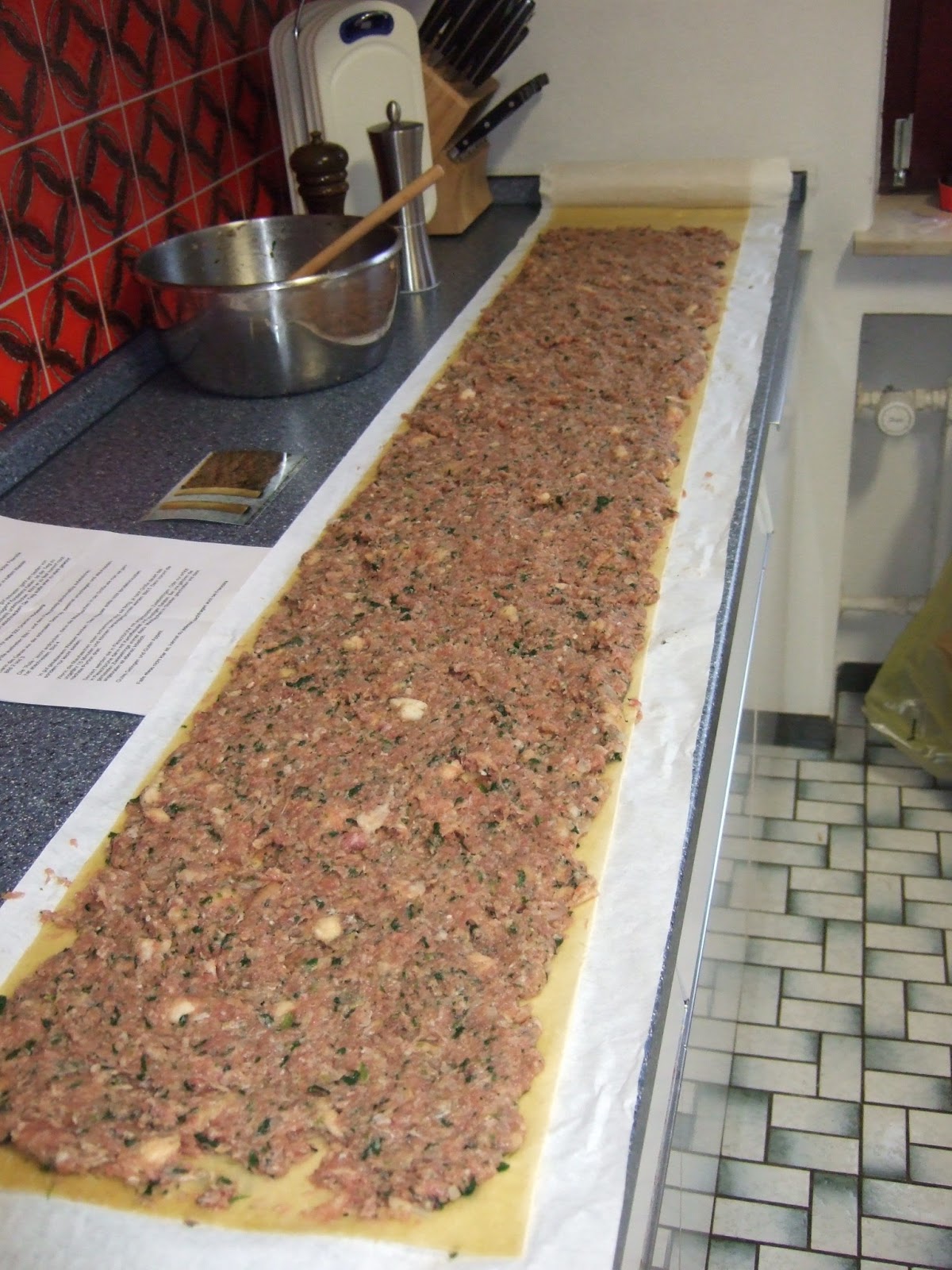 As this was my first attempt, I learned several things.

1. I need to rip the bread into smaller bits.

2. I need to knead the mixture longer.

3. I should add more spinach and parsley.

4. I really do need to taste the raw mixture
(and add more spices).

5. I should probably spread the mixture more thinly. 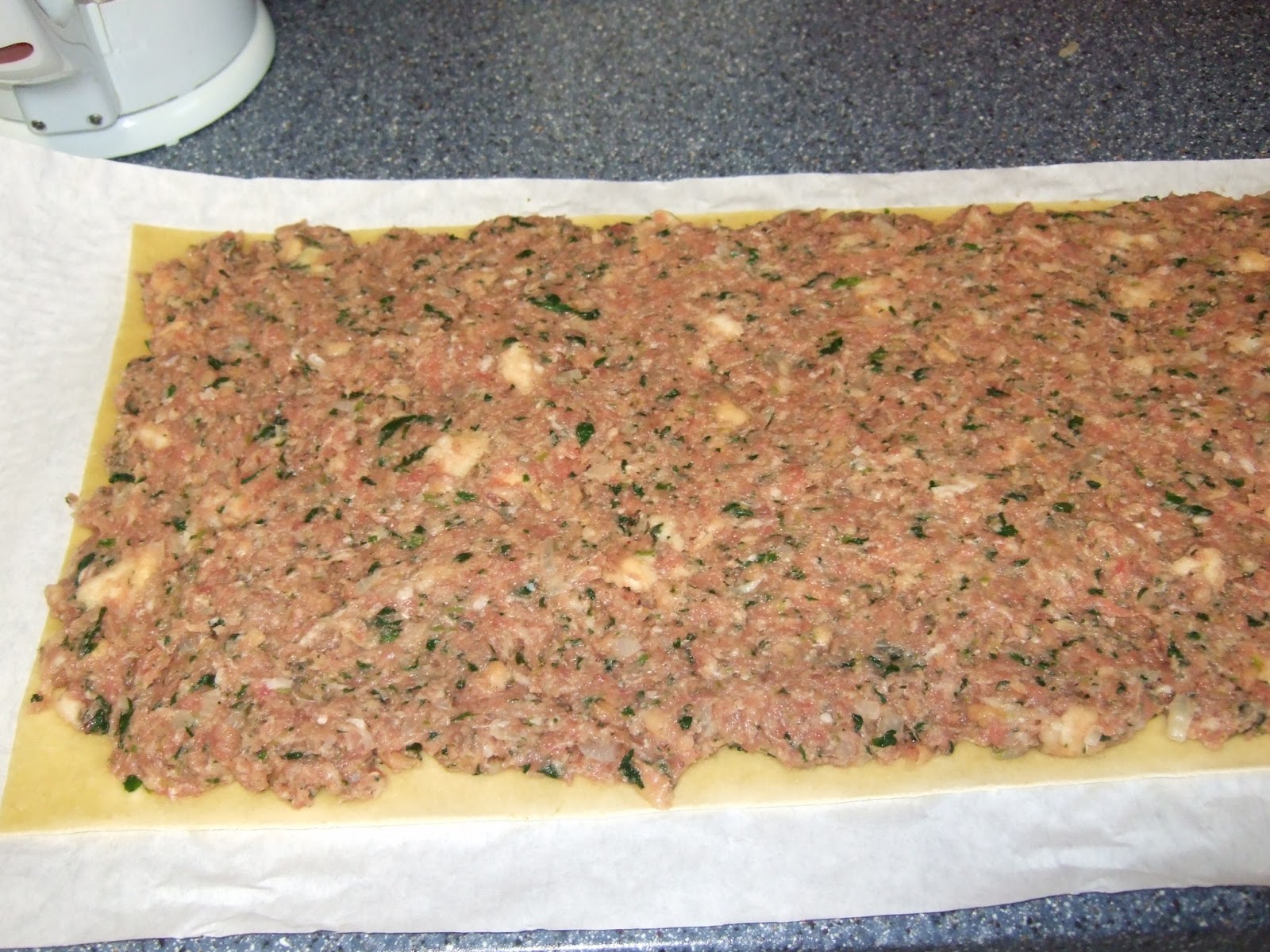 After it's evenly spread, begin at one end and fold the dough over the mixture twice and cut lengthwise with a pizza cutter. The Maultaschen rolls should be about 8cm wide.  Repeat this folding-and-cutting until you reach the end of the roll of dough. 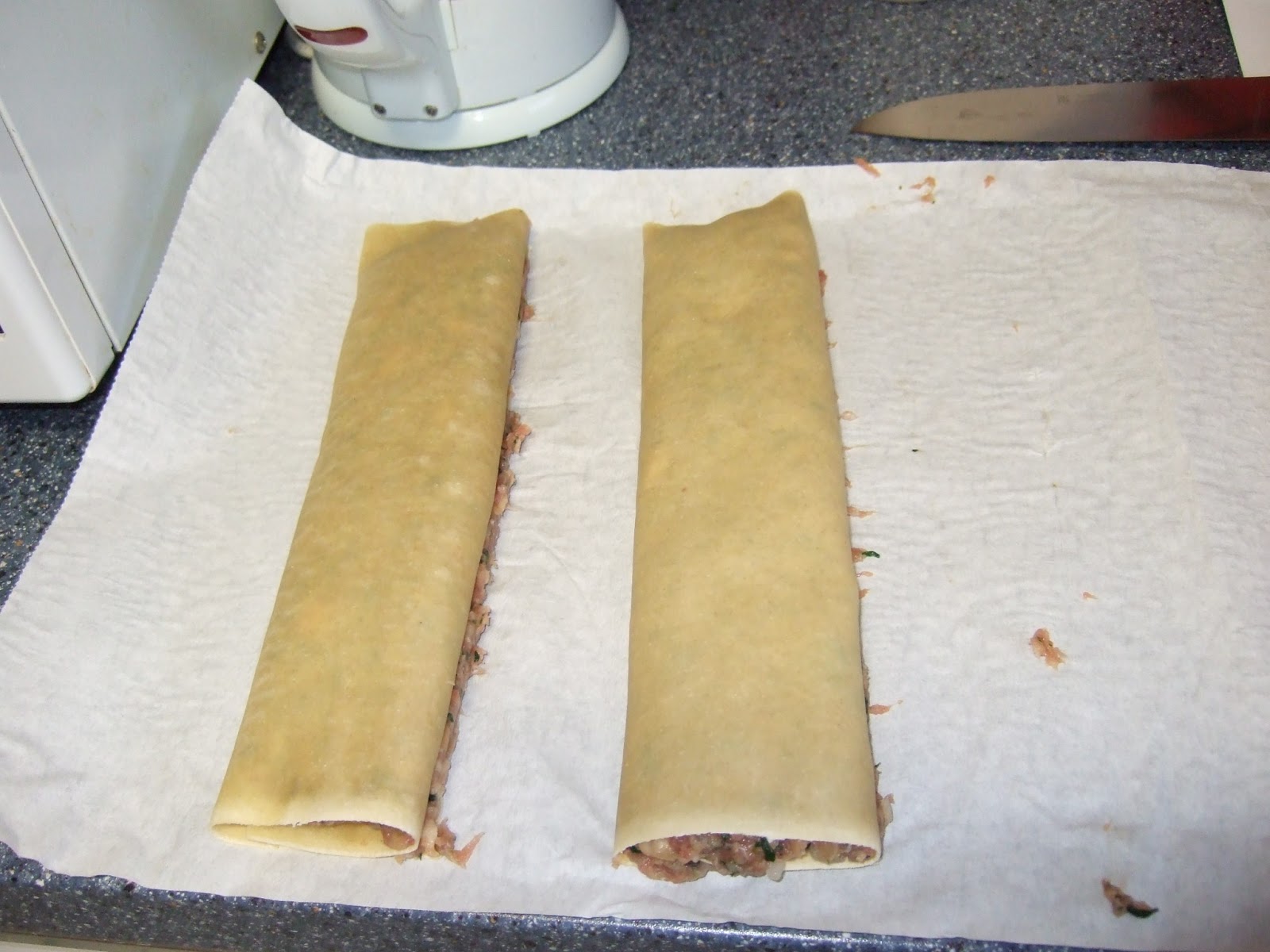 Press each roll lightly, and cut them sideways to your desired size. 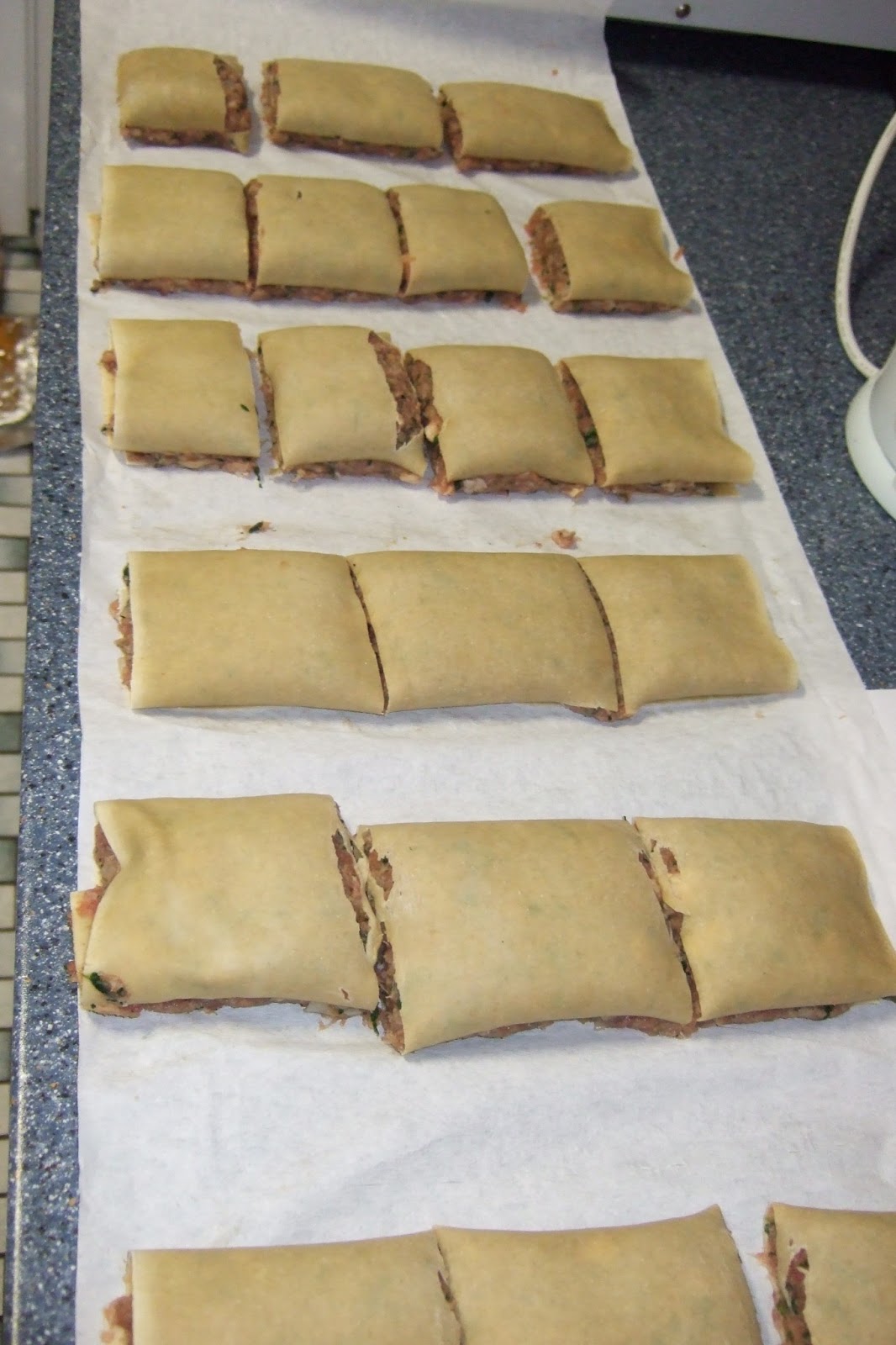 As you can see, I had trouble cutting them in uniform sizes. I couldn't decide how big I wanted them. I'll probably cut them three to a row next time, but by spreading the mixture more thinly, they'll end up a more reasonable size.

If you are not planning to cook and eat all the Maultaschen in one sitting (who could unless you're serving them at a party?!), you can wrap them raw in tin foil and store them in the freezer for several months.

For the ones you want to eat today, bring a pot of well-salted water almost to a boil. The water should not be bubbling, but rather simmering.  Drop in however many Maultaschen fit without crowding, and cook them about 15 minutes (actual time will depend upon how big they are). They should be done when they float, but I discovered they floated long before the 15 minutes were up. I sampled the first one and cooked the rest for the full 15 minutes.  Remove them with a slotted spoon and add the next bunch.

We served them the first day in a broth (but forgot to add roasted onions on top). A salad is good on the side, such as a potato or carrot salad. 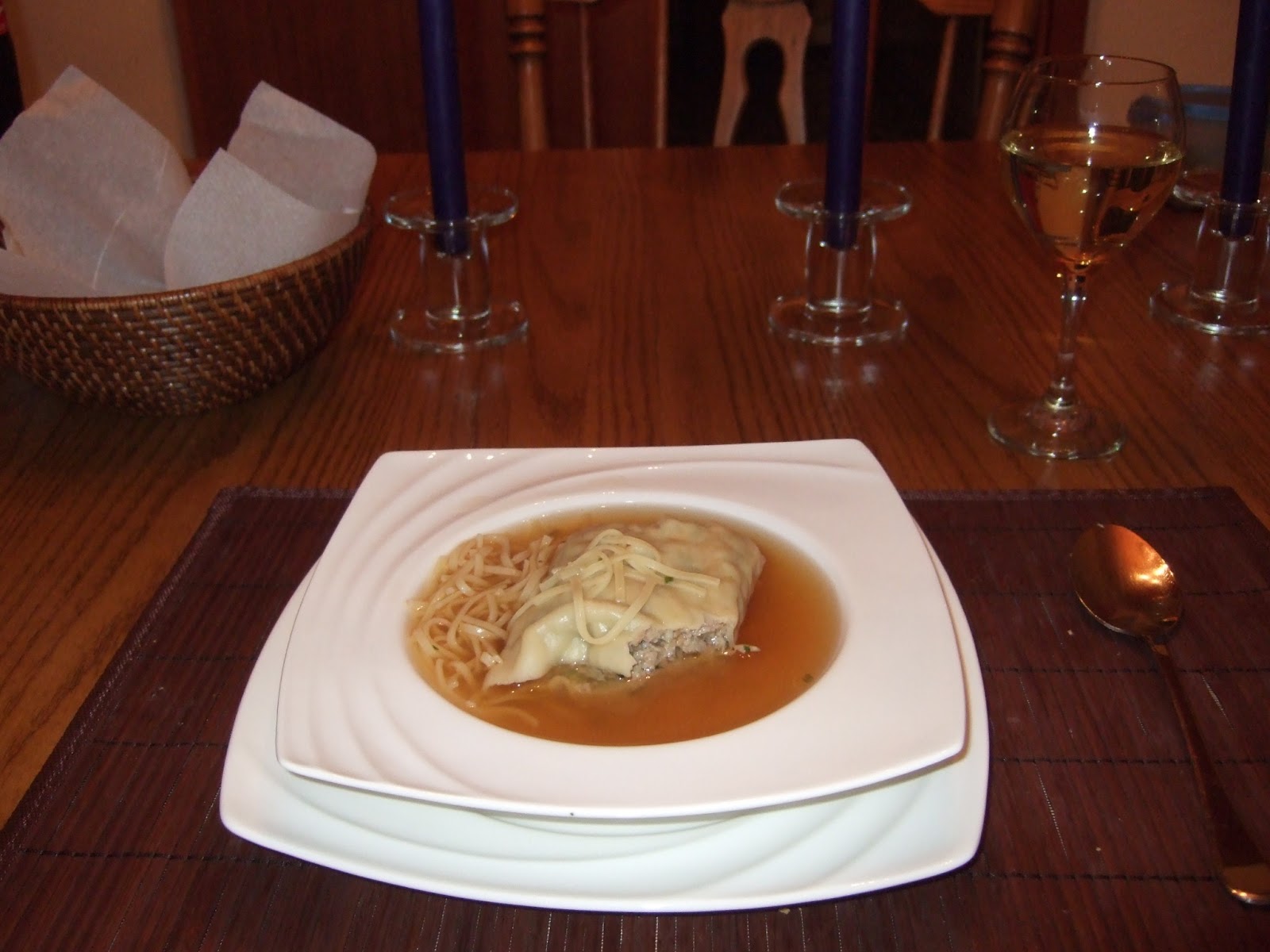 The next day we sliced each Maultasche into several pieces and then fried them along with the onions we'd forgotten the day before. I found that even more delicious, but forgot to take a picture!

If you're only a visitor to Swabia, then order this in a restaurant at least once. If you're here to stay a while, give it a shot by hand. You will at least earn bragging rights (though bragging is not something a Swabian housewife would do!), and you will have a freezer full of homemade Maultaschen to serve on Sunday evenings or holidays when you forgot to plan ahead for the grocery stores being closed.

Just don't serve them on Fridays during Lent, because I'm pretty sure God has figured out the truth by now.
Posted by Ami im Schwabenland at 21:28