Back in November when M was looking for tips on making our own Geschüh (jesses) for our future birds, he came across and showed me this blog post. He knew I'd love it. I read a few more posts and then went back to the Ronja's first post and started reading from the beginning. It's a delightful blog, written with heart and humor and focusing on falconry from the point-of-view of the falcon. And she's begun translating it into English!

Later that evening I decided I had to write to Ronja's Mensch (human), and I discovered that she is in Baden-Württemberg, not more than an hour's drive from us. She responded and we have continued our corresondence ever since. Skipping ahead to yesterday, I met Ronja and her Mensch personally and spent more than 5 hours with them. What a day, and what a beautiful Sakerfalke Ronja is! 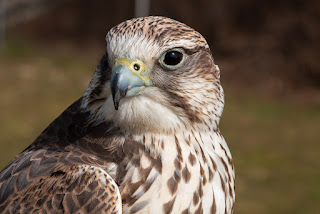 We first went up to a field behind their house for some Federspiel-Training. For this Ronja's Mensch secures a GPS sender to her Geschüh and activates the app on her Smartphone that shows exactly where Ronja is in case she buggers off during the training. Beizvögel might do this for a number of reasons, not the least of which is because they can. When the Falkner sends them off to train or hunt there is nothing forcing the bird to return, and many a Falkner has stood for hours beneath the tree in which his bird is perched trying to entice her to come down while the bird thumbs her beak at him and preens. Without a sender attached to the bird the Falkner might never find her again.

Then Ronja's Mensch ties a piece of meat onto the Federspiel (lure that looks like a bird), which is attached to the end of a telescoping fishing pole. While she is securing the delicacy Ronja has her Haube (hood) on so she doesn't get overly excited. When she's ready, she removes Ronja's Haube and lets her fly off. Ronja knows her work (and knows where the meat is), gets some momentum going, then swoops, dives, turns, and whooshes past her Mensch, who is swinging the Federspiel and pulling it away from Ronja as she shoots past at 127 km/h (79mph). Her Mensch knows her well, and she can see when it's time to stop pulling the Federspiel away at the last moment so Ronja can catch it.

After Ronja had her reward we went for a walk among the fields to an alpaca farm about 2 km away. During that walk Ronja sat cooperatively on my Falknerhandschuh (glove). Her Mensch calls this "Baum-to-go" (Baum = tree). Ronja's favorite pastime is "Rumgucken," which means sitting somewhere and looking around. Flying is hard work, so if a silly human is willing to offer her glove as a perch while wandering about, well that's perfectly fine with Ronja.

It's funny to see the looks on people's faces as they walk by and see the falcon on my glove. It's just not something one sees every day! Sometimes they stop and ask questions, sometimes they take a guess at what kind of bird Ronja is (we heard Bussard, Weihe, and Milan), and others just nod and keep walking. It was a beautiful sunny day with a light wind.

We sat on a bench chatting about falconry for a bit while Ronja perched on the back of the bench and did her Rumgucken. At one point she made it clear that she was ready for some noms and pecked at her Tupperware® bowl until her Mensch opened it and offered her the rest of the Taube (pigeon). 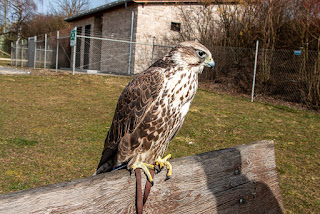 On the way back the wind was still up and Ronja treated me to her Titanic impression. You know the scene at the front of the ship with Jack and Rose? She didn't want to fly off on her own; she had a good steady grip on my glove. But she likes to "lüft" her feathers in the sun and wind. Come on, admit it, you've wanted to do this on a beautiful day, too.

Oh dear...I just found out on a falconry marketplace that the Falkner and breeder Ronja came from has one of her sisters from a later brood for sale. This is me right now...

Posted by Ami im Schwabenland at 14:17