The U.S. is apparently leaderless, since the only way the prez was willing to communicate with the people he was supposed to serve was via Twitter and other social media, and they’ve all banned him now. I'm sure that's great for national security. [Note to self: Work harder at convincing children to move to Europe, or at least Canada...]

It’s been nearly a week since Buffalo Man and his cohorts stormed the Capitol with nefarious intentions (what were those cable ties for, Mr. Air Force Veteran Guy? And the noose and gallows? The pipe bombs?) and we still haven’t heard from the manchild in the WH or from his VP, or (…checks notes…) anyone from the still-current administration.

Please note: I am obviously no expert, and I am trying very hard to keep myself informed. I am angry. I’ve never been a flag-waving nationalist, so I'm not claiming it’s about “OMG, my country has been attacked!” I’m angry because too many Republicans are apparently so devoted to Trump that even after inciting an insurrection against Congress, he remains in office and in the White House. I don’t get that. Why didn’t Pence invoke the 25th Amendment? I can only guess – and then "a source close to the vice president" reportedly said this as well – that he is afraid of the damage Trump would do if faced with such a scenario. Pence would need support from the cabinet, who seems to share his fear of or devotion to Trump. Think about that: Trump is still in office because “What if he did something worse than he’s already done?” I suppose the real reason, though, is that Republicans fear losing votes of those who support Trump if they act against him.

Here’s the problem for me: He is the leader of the GOP. He is the Republican party. They and their voters chose him. Many of them apparently still believe – without providing evidence that could convince federal judges – that the election was fraudulent and stolen from Trump. He has already indicated that he will be back to run in 2024, and I imagine that’s why so many GOP lawmakers are still backing him. Voters who have supported him have openly said for four years that some of the reasons Trump is so great in their eyes is because he “says what needs to be said,” he “says what he means,” and he “talks straight.” They like and praise his style, his disregard for common decency (which some call “political correctness”), and his appalling behavior.  He is not going to change and they are not going away, so they'll be able to gleefully vote for him again.

This election was too close, and there’s no telling what will happen in four years if he runs again. 74,222,593 Americans voted for Trump in 2020. 74,222,593 people looked at that orange-tinted buffoon-turned-madman and said, “Yes, THAT is what I want to stay in the White House. THAT is what I want to lead my country.” Every single one of those votes was a signal to him that he is loved, adored, and revered. Or does anyone think he saw that number and said to himself "It's possible some of those were people who don't actually like me, but voted to support the party"? He kept going on about how he got more votes than any sitting president EVER. So obviously (to him), the election was fraudulent and stolen from him. And his supporters believe him.

The article of impeachment brought forth by House Democrats nearly a week after the insurrection says that Trump is and will continue to be “a threat to national security, democracy, and the Constitution if allowed to remain in office, and has acted in a manner grossly incompatible with self-governance and the rule of law.” The FBI is warning that in the coming days (between January 16 and January 20) there will be further armed protests and attacks, not only in Washington, DC but also in all 50 state capitals. And yet…and yet. Not enough Republican lawmakers, cabinet members, or members of the administration are willing to get him out. They’d rather wait and see. Abwarten und Tee trinken.

Some have said/tweeted they think Trump will have lost enough support after the attack on the Capitol that the RNC wouldn’t let him become the nominee in 4 years. That’s pretty bloody naïve. If he is not run out of town or tossed into prison, the GOP will spend the next four years excusing and enabling him to woo his supporters and the people who voted for him. Trump and his party have been feeding lies to citizens who have been soaking them up because pretty lies make them feel good, and that will continue. Quite likely already Republicans have forgotten how it is that Trump (and Giuliani, Hawley, Cruz, Boebert, and others) is/are considered at the very least partly responsible for the attack and are re-writing the story. “He never actually said that.”  “Don’t you understand sarcasm? He was joking!” “Just because someone encourages you to do something, doesn’t mean you should do it. It wasn’t Trump’s fault.” “This was no different than the protests and riots during the summer.”  Yeah, I don’t want to hear any of that.

Although CNN is the only American news source we have on TV in our home and I have had it on way too often of late, I do not rely solely on it for impressions of events. Even I am growing tired of their anchors telling us how we should feel and think about events. We need to think for ourselves.

M and I watched all 2.5 hours of this podcast with Bret Weinstein and journalist and “radical pacifist” Jeremy Lee Quinn, who was filming in the midst of the mob on the west side of the Capitol. Quinn spoke directly with the guy wearing the horns before things got ugly, and his interview with the Buffalo Man is on his Twitter feed. Both Quinn and Weinstein have received hate mail from the far left and the far right, with both sides calling them enemies of their cause.

I also read political historian Heather Cox Richardson’s daily letters summarizing the madness of the day and I follow Peter Wehner on Twitter, a former life-long Republican who saw the light about Trump right from the start and said he could never follow that even though his political identity is conservative. CNN’s fact checker Daniel Dale is an important one for me because when posts go viral but are untrue (even if we wish they were true), he calls them out.

I recommend any of those and welcome recommendations you have for me of reasonable people, regardless of their politics leanings.

One final PSA: Please, people, do your own fact-checking before you share, re-tweet, re-post, and comment online. I've been reading a lot of comments on various tweets, and some people are believing everything! 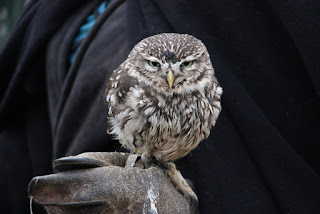 I couldn't come up with a photo for this post, so I chose an angry-looking Steinkauz. Somehow that fits quite well. His name is Joschi.

Posted by Ami im Schwabenland at 15:07