Last Saturday, for the second year in a row, M and I participated in Scott Kelby’s Worldwide Photo Walk. This time we were the leaders! We learned plenty from our walk leader last year in Tübingen, and almost right away we started planning for our 2019 walk in Esslingen. 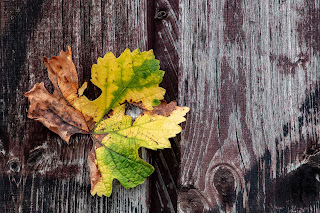 This is my description of our walk last year in Tübingen. 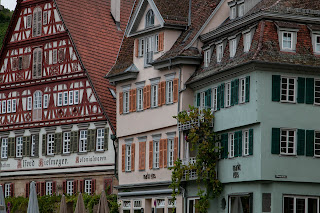 We were a small but international group – really the perfect size, if you ask me. Although up to 50 can register for a walk through the website, I think that would be too many people for me. The photographers don’t have to stick together or even necessarily follow the route planned by the walk leader, and it's fine if walkers have their own plan and wander off. The thing I really like about having a more manageable size group, though, is that we can get to know each other much better! Most stayed for dinner afterwards in a restaurant near the beginning and end of our walk, and that gave us extra time to chat, compare notes, and exchange contact info. 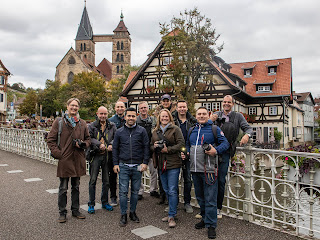 We are originally from Germany, Romania, Syria, and the U.S., ten in total. The equipment people brought came from Sony, Nikon, and Canon, and two used their smart phones. Everyone had different ideas of what to photograph, and M and I just basically led them through some of Esslingen’s pretty bits. Those of us with less experience watched the others and got ideas from what they were shooting. And yet we were spread out often enough that we didn’t always know what the others had in their view finders. It is fun to see the others’ photos and creativity, and I especially like it when I’m looking at a photo afterwards and think, “Very nice! I would not have thought to take that!”


We had planned our walk from 15:30 to 17:30, but knowing how things would likely go, I reserved our table for dinner at 18:00. Good thing, because we only arrived at the restaurant at 18:10! You can’t rush photographers, nor would you want to.
The sky was drab and dull, but despite the clouds it didn't rain that afternoon. Solid blue sky and bright sun isn't actually the best for afternoon photography, but a little mix and interesting cloud formations would have been nice rather than basically solid grey. Maybe I can arrange that for next year...

The quote of the day came from one of the guys, who’d set up what he thought would be a great shot. Frowning at his display after the picture, “Well, that’s not what I was going for. But I’m hungry.” We were at the Hafenmarkt at that point, and I asked them if they still wanted to see the oldest continuous row of half-timbered houses in all of Germany (ca. 1331) or rather go right to dinner. Like the dedicated photographers they are, they set their hunger aside and went for the houses. And then they found the back side of the altes Rathaus, a statue, a shop window, more Fachwerk… 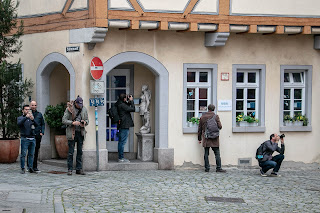 That is my favorite candid shot of most of the hungry group. Hungry, but, “Wait! This could be a good shot!

What could be better in today’s world? A worldwide peaceful activity that promotes creativity and passion for photography. An opportunity to spend a few hours with other creative minds and folks who want to exchange ideas and learn more about framing, exposure, optimal camera settings for various conditions, and photo editing. Before last year’s walk I only shot in jpeg and used a basic program to do very simple editing – rarely anything beyond cropping and fixing red eyes. After the walk I finally got interested in Lightroom® and semi-serious photo editing. I still have much to learn, but M gives me tips ("Ease up on those sliders!") and I’ve been watching instructional videos when time allows.

It wasn't all serious photography! We fooled around a bit, too. I didn't know Dominik was taking the above shot, but later he returned the favor! 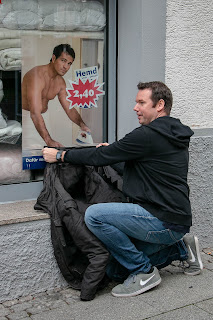 I must admit, though I hope someday to capture some creative "Wow!" photos as the other photo walkers with more experience did, my favorites from my memory card are the candid people shots of our group members.
After last year’s walk I wondered if my childlike enthusiasm would fade, and the WWPW would be one of those “Oh, that was fun once, but we’re busy, it’s a Saturday (the only day when we can get serious yard work done), and what if the group isn’t as fun and interesting as last year…?” But it never faded at all during the year! I’d noted in my calendar when the walks would be open for registration, and I submitted my leader form at the first possible moment. Then I checked my email ridiculously often for confirmation, which came just a day or so later. I contacted last year’s photo walkers so they knew about our walk in Esslingen, and one of them signed up! I also let a few area friends know, and two of them joined us. It was definitely worth the time, and our gang was just as fun, interesting, and eclectic as last year's group. 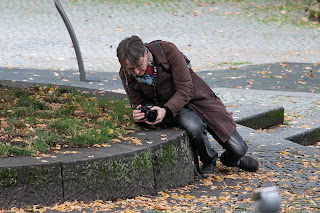 Leading the walk has been little extra work. The location (Esslingen’s Altstadt) was obvious, and we knew roughly which areas we wanted to highlight for our photo walkers. The hardest part was deciding what to cut out (Stadtkirche, Zwiebelbrunnen, Burg) for lack of time! We’ll surely do another one next year and will include other parts of the Altstadt, perhaps starting up at the Burg.


Next year’s walk will be on Saturday, 3 October – which in Germany is a holiday! It's always on the first Saturday in October. Wherever in the world you are, if you are interested in photography or just enjoy taking pictures and meeting people, mark your calendar! The walk registration starts near the end of August, and all you need to do is google “Kelby Worldwide Photo Walk” to start searching for one near you. And remember, if there isn't one close enough to you, check back often and/or apply to be a leader! It is not difficult (contact me if you want some tips from a first-time leader)! 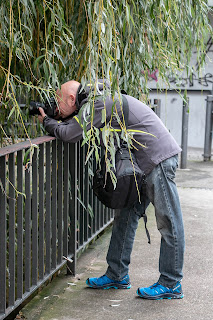 I'll leave you with some of the other walkers' images of Esslingen.

Posted by Ami im Schwabenland at 10:38