Disclaimer: I am not an experienced hunter! I am in the middle of my Ausbildung/education to earn my hunting license so that I can continue on and learn for my Falknerjagdschein - falconer’s license! My blog entries about hunting are to be taken as impressions of someone who is in the midst of learning about the world of hunting in Germany.

There is a very important term in the world of hunting in Germany that does not exist in English. The concept probably does among responsible hunters in the U.S., but there is no good English translation of the word – “Waidgerechtigkeit” as a noun and “waidgerecht” or “waidmännisch” as an adjective. In order to be able to understand the idea I needed to learn a whole lot of new terms, phrases and ideas.

Waidgerechtigkeit can be described as a collective term for all written and unwritten hunting laws, the mastery of the craft of hunting and the ethical mindset or attitude of the hunter toward the wild game she hunts and the nature in which she hunts. As I understand it, the main focus is on sparing the hunted animal as much as possible from pain, agony and stress and to be mindful of animal protection laws.

The closest English word I can come up with for waidgerecht is “honorable/honorably,” although that is a general term used by anyone from hunters to lawyers, whereas waidgerecht is a term that is only used by German-speaking hunters. 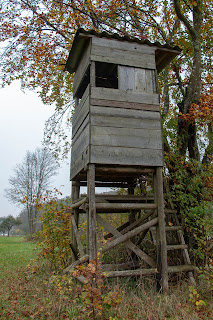 Mistakes and bad shots happen, and every hunter knows this. But it is no laughing matter or fodder for drunken campfire stories.

When a hunter has done his job well and successfully, his comrades will congratulate him with a handshake and “Waidmannsheil!”

Hunting in Germany is considered Kulturgut (cultural heritage). There is a special language devoted just to the world of hunting, with many terms and phrases that are not familiar to Germans who do not hunt. There are entire dictionaries devoted to the Jägersprache, which even native speakers are wise to purchase and use as they start their schooling to become hunters. As a non-native speaker I have found that it’s often senseless to try to translate these words into English, especially since I had zero exposure to hunting during my 44 years living in the U.S.. Just like with “waidgerecht,” there often is no good translation anyway. Incidentally, my online dictionary translates it as “expertly” or “fair,” neither of which come close to deep and complex meaning of “waidgerecht.”

There are many traditions associated with hunting in Germany, some of which reflect the Native American attitude toward nature and wild game. Above all, respect: Respect for nature, respect for the animal you’ve killed, respect for your fellow hunters and the dog handler who will, with his specially trained tracking dog (for instance), help you find the animal you shot if it survived enough to flee, and respect for the traditions. For one example, after the hunter has killed an animal and before field dressing it, she breaks off part of a branch of a Fichte, Tanne, Kiefer, Eiche or Erle tree  to cover the wound and another to put in the animal’s mouth. The latter is called “letzter Bissen” (“the last bite”). Her hunter companion will break off part of a branch, hand it to her with a handshake and “Waidmannsheil!”, and she puts the branch (the Schützenbruch) in the belt of her hat. If a dog was needed to find the kill, the hunter breaks off a piece of her Schützenbruch and puts it in the dog’s collar in thanks. Well, unless the dog is like our instructor's Bayrischer Gebirgsschweißhund, who hated the scratchy feel of a branch in his collar and prefered a pat on the head.

These old traditions are not just for show. Everything I have seen and read leads me to believe that these rituals are a deeply important symbolic part of hunting. And I’ve only scratched the surface to give a few examples here. There is so much more to hunting here than just grabbing a gun and going out to shoot something. Part of my training is to learn about these traditions, the rituals, the different types of hunts that are common here (Pirsch, Drückjagd, Ansitzjagd, etc.), and the hunter’s language. Although I have lost my fear of guns, it is still doubtful that I will ever actually go hunting. But the amount of knowledge I have gained so far (and there is much more to come as I prepare on my own for the test) is almost unbelievable.

To participate in Treibjagden, or driving hunts, as M and I will be doing at least twice in the next two months as Treiber (drivers/beaters), one must learn the important hunting signals given by the Bläser - horn blowers. They signal the beginning of the hunt, when the Treiber should start driving, and when the hunt is over, for instance. At nearly every gathering of hunters from celebrations to funerals the Bläser will come with their horns.

Here is a video in English about hunting in Germany, in which you can see several of the customs I've mentioned. Be aware, though, that part of hunting is Aufbrechen (field-dressing) and hanging the carcas off the ground for hygienic reasons.

This award-winning video is in German and for me an excellent explanation of Waidgerechtigkeit and the type of hunter I would want to be.

If you are curious what a Treibjagd is, this video in English shows it quite well, without being too graphic until the last 2 minutes or so, when some of the field dressed animals are shown hanging on the rack.

Personally I don't find the Aufbrechen problematic. I would rather eat the meat of an animal that lived happily in the forest and died suddenly in its home rather than that from an animal who was transported for many miles in the back of a filthy, smelly semi-hauler packed in with its ill-fated comrades before being systematically slaughtered. It has been argued that there is no meat more Bio than Wild (wild game), and I can see the wisdom of that. I'm not here to change anyone's mind, though; I'm just writing about my experiences.

Back to the books...

Posted by Ami im Schwabenland at 17:58