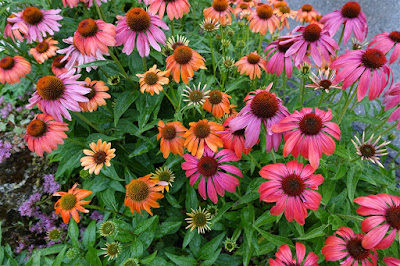 Ahh....Summer! Even if the Rhododendron and Azaleas are just a memory and the Vergissmeinnicht are finished as well, our garden is still blooming with all kinds of other pretty flowers I don't know the names of. We've got some Hortensie (German spelling), Gänseblümchen (daisies), and roses, and of course it's been Furztrocken (dry as a fart) in our village for a long while, so we have to water most evenings. Everyone else seems to grumble about rainy days, but I do not!

It was beautifully cool the last week or so, which I find I like better than stifling heat - to me that's anything above 27°C (I'm a bit of a wimp). The heat will start to pick up now, and I'll be yearning for fall before long.

I thought I would write a general post about what I've been getting up to lately, just because. So here is what I have been...

homemade deodorant! I saw this on our noon show, ARD-Buffet, and I decided to give it a try. I don't like the fact that most anti-perspirants have aluminum salts in them (that's what turns your shirt armpits off-color, and smearing a metal on our skin every morning can't be good for us), and this is a simple recipe! I used 100 ml Hamameliswasser (witch hazel) and 3 ml Odex. The first day I used it I wasn't sure, but by the second day I was pleased with the result. It's very neutral, and I'm assuming mild and good for the skin. I'll have to see how well it works when the temps rise above 25°C, but the woman who showed how to make it said she has used in all her travels, including in Africa. 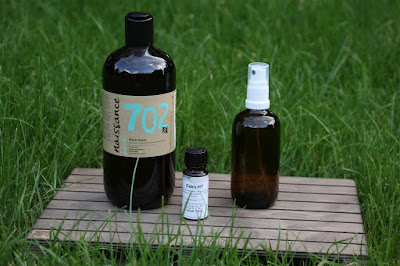 birthday cards and postcards to my children. They both live in Pennsylvania now, though they are still 6 hours apart by car! Their birthdays are 3 days apart in July.

the Razor's Edge, by W. Somerset Maugham. It's an old favorite, and it's possible this is my second time re-reading it.

the value of the exchange program. I just don't know if it's worth it to take a chance we'll get more kids who pull what those kids did. Apart from that, one in particular was a huge pain in my neck and shockingly immature. This is volunteer work for me; I should not have to put up with that crap.

When my salmon burger came, I asked the waitress for some ketchup before trying the curry-mustard dip that came with it. I could have saved her the trouble, the curry dip was so delicious! And I don't even really like curry.

cherry tomatoes! I love tomatoes, M hates them, but luckily for me he likes growing vegetables. We've got some peppers growing in the same Hochbeet and Kopfsalat in another one, but the tomatoes are what make me happy. My snack yesterday afternoon was a few too many Tomaten-Mozzarella-Basilikum Spieße. 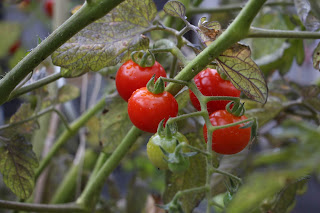 the amount of sleeping I do! I swear, I nap as much as a useless cat. We're pretty sure I was a cat in a former life, which keeps us wondering what on earth I did to get down-graded to human in this one.

SCOTLAND!!!! Our next trip to Mull is happening in September, and we're both looking forward to it. I've done my share of gallivanting this year, but it's M's only time away from the office.

What have you been up to?

Posted by Ami im Schwabenland at 15:29