Each year for the past three years I have taught a two-week "crash course" for American students from my hometown in Wisconsin who come to Esslingen, Germany for a 5.5-month exchange. At best they have learned a little bit of German (two of the five high schools in their area offer part-time German), but each year there are between one and three who have had no German at all. After their two weeks with me, they attend one of the four Gymnasien in Esslingen. A Gymnasium is a college-prep high school.


What I try to do in those two weeks is teach them some basics of the language, lots of basic conversation, questions they’ll be asked and the answers they can give. We have four hours a day together, and we start out in the classroom (at the VHS – community college). After roughly two hours we head into town for some hands-on learning. Typical activities they carry out in German are:

This year I faced a few situations I had not in the previous years. I am not writing about this to gripe about the students or shame them (they are very pleasant and likeable!) but rather to show how very important it is to be prepared for travel in a foreign country.
The students had already been in Germany (or skiing with their host family in Austria) for about a week before our class started. From their families they had already learned the importance of not crossing an intersection when the Ampelmännchen is red! This was especially brilliant at the moment where I was not thinking and stepped out into the road. There were no cars in sight and few people about, but that is no excuse. I do as the Germans do in my day-to-day life: wait for green whether cars are coming or not. But for whatever reason I had a moment of absent-mindedness. Thank heavens one of the students (they were behind me and had dutifully stopped) half-shouted, “That’s illegal!” I leapt back to the sidewalk, hopefully appropriately shame-faced. I was pleased that they did what they were supposed to do rather than just blindly following me into the street!  Teachers make mistakes, too, and the students acted appropriately.

On a different day, we were gathered together in a public area discussing the day’s activity. I noticed peripherally two men walking together slowly in the area near us, who kept looking in our direction. They were probably simply waiting for a store to open, and I did not need to act because they never got very close to any of my students. At one point, though, two of my students had stepped a bit away from us and I saw one of them from the back sort of “puff up his shoulders” while facing the two men. I called them back, said it was time to go, and we went off on our excursion. Later I told the student what I’d noticed and asked if I interpreted it correctly, that he’d tried a “stand-off” with those strangers. Short answer: yes. He said they’d made eye contact, and he “wasn’t going to just look away.” I said if it happens again that is exactly what he will do – look and/or walk away.


And then I said something to them that my host father said to me 32 years ago: “You are not in Sheboygan anymore.” Frankly, I don’t think that’s a wise thing to do no matter where you are, but in a country where you cannot rely on your language to get yourself out of a sticky situation, you must do everything you can to avoid sticky situations. I did not like what the men were doing – lingering around us and watching us – but they were not really doing anything wrong. Had they spoken to or threatened my students I would have put myself between them and tried to diffuse the situation and sent one of them for help if necessary.  I hope I was very clear about the fact that my student endangered all of us by one simple action (eye contact) and body language. He meant no harm, but he could have caused a serious situation. 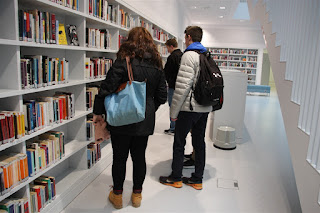 The next day at the start of our excursion we were all standing – and shivering – on the train platform waiting for our S-Bahn. One of the students jokingly jumped at another one of them to startle him/her, and the other student’s back was toward the train track. He was standing a safe distance from the edge and no train was coming. But that is absolutely not ok, and during my scolding, I told them German children learn not to do things like that when they are six (these students are 15 and 16). Again, I can only hope they believe me.

The problem here is that American kids (at least those who do not live in big cities) have no experience with situations like these. They are driven everywhere by their or their friends' parents, they have little to no independence, if they take a field trip with their class a bus is hired... In Germany school classes take field trips using trains, and even if their parents haven’t taught them how to behave while standing on the platform, their grade school teachers have.

Germany/Europe is not dangerous! But you have to know how to behave in order to stay safe. Do not cross against the light in Germany. Do not provoke or engage strangers in any way except to offer your help if you see someone who seems to need it – and then still be careful and cautious. Do not fool around on a train platform or near a street. Do not be afraid, but be aware! Be very aware and take note of everything around you. Constantly.


To end with something that is not connected to these students but definitely to the topic, when I returned home at the end of the two weeks, I was waiting dutifully at a crossing at the Busbahnhof (bus station). Two teenage boys, who were apparently too cool to wait for green like the rest of us, ambled across the street seemingly without a care in the world. The first boy reached the other side, but the second boy lagged behind (again, too cool to hurry) as a bus barreled toward him. They had both clearly seen the bus. The bus driver did not brake. The 2nd boy hesitated a split second and then leapt backwards. Had he decided to dash forward or stay put, he would be in a hospital or morgue right now. In that flash of an instance, I thought I was going to see a boy get killed. In Germany, do not cross against the light!


Before you travel to a foreign country, get some advice about potential dangers from travel books, locals, or people who have traveled there before. I cannot stress this enough.