I never read as many books in a year as I'd like to, which is one reason I don't set a goal on Goodreads. As a realist, I prefer to not set a goal rather than set one I won't achieve. I just read what I can and enjoy it as I go along. This post comes dangerously close to a reading goal, though, and I'm already feeling skeptical. But let's go with it and see what happens.

I don't like being "between books," which is why I generally read more than one book at a time. One of those needs to be small enough to fit in my purse for train rides and errands (yes, I have been know to whip out a book while waiting in the slow line at the Kasse), which my last novel of 2017 - Ken Follett's a Column of Fire - definitely was not. 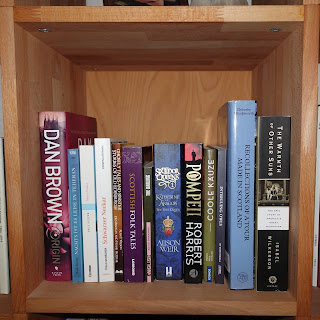 In no particular order, here are the books with which I'm planning to start 2018 and how they found their way to my shelves. (X means I have since read/finished the book.)

I have not read all of Brown's books, but the ones I've read were quite intriguing! Real discussion-starters. I learned he'd come out with a new one in 2017 and promptly put it on my birthday list. My kids ordered that one for me, along with a Column of Fire. I have no doubt I will like it, but it's not purse-size and won't be traveling with me. I'm not going anywhere until the second half of February, so this will probably be my January book.

I heard about this one when I went to a book reading in Stuttgart about this book. There was a project in 2017 called "Stuttgart liest ein Buch" (Stuttgart reads a book), which encouraged people across the city to read a certain book and attend events at which they could then discuss it. The book they focused on was this one, and I decided to order it.

A teacher friend I met through the AATG (American Assoc. of Teachers of German) listserv who teaches English in a town not far from us gave me this book. Despite the fact that Auster is an American writer, I have never heard of him. Perhaps that's because all the writers I covered in American Lit were long deceased. My friend recommends the book, and I'm usually open to book recommendations!

Speaking of recommendations, this book has been loaned to me by one of M's employees (I'd also call him a friend of mine). There's a genre called Schwabenkrimis (Swabian crime novels), and this is one such book. I started reading it in the fall but couldn't quite get going - Krimis are not really my thing. It's the start of a series, though, and I really want to at least read this first one. If I like it as much as my friend did, maybe it will open a new genre for me. My challenge with such novels is to force myself not to browse the end when I feel like things are moving too slowly.

****
By the way, did you notice on my photo above that books printed in English-speaking countries have their titles facing left on the binding, and those printed in Germany face right? (The Auster book is English but was printed in Germany.) This could be really awful for people with OCD. In order for all the titles to face the same way, the German books would need to be shelved upside-down!
****

My kids and son's girlfriend bought me this book while we were in Edinburgh together last June. This will be a good train book because it's a collection of short stories and a good size for a purse or backpack.

The kids (they're adults, but you know how that goes) also bought me this book in Scotland, and since M and I are going there again this year, these two books will put me in the right frame of mind - as if I need books for that. If I haven't read this one by September, I'll take it with me.

the Darling, by Anton Chekhov

This was a gift from a student of mine from Russia, and I want to finally get to it! I'm familiar with Chekhov, but not this story. The book includes several other short stories as well and will be a good train read. I like to make sure I read at least one World Lit classic each year, so this will count for that as well.

My favorite genre is historical fiction, though putting this one on my list for 2018 is cheating a bit. I read most of it in 2017, but then abandoned it temporarily for a Column of Fire. This is not the first time I've spread a book over two years. Alison Weir is one of my favorite historical fiction writers, and I can already see myself reading all six in this series about Henry VIII's ill-fated wives (divorced-beheaded-died-divorced-beheaded-survived) as they come out. My son's girlfriend brought my attention to this series, and my Schwiegermutter already has the first two! The third is due out in May, 2018.

Don't you love it when you have a book on your shelf for so long that you don't remember how you heard of it or why you bought it? Hello, Pompeii! I don't know what to expect from this one except that, well, I know how it ends. I have another book by Harris - Enigma - but I couldn't get passed the first chapter. I don't know why I bought that one either, but I have higher hopes for Pompeii.

This book is fodder for my Steinkauz obsession. I bought this book to put under the Christmas tree for both M and me, but then my Schwiegermutter gave it to me for my birthday! It is chock-full of beautiful photos of Käuze (a type of owl) and information about their habits and way of life. I'll be taking notes for future blog posts about Alfred when I read this one.

When my mom mentioned  our interest in owls to her cousin, he recommended this book. My mom passed the idea along to M for a Christmas gift, and thus it ended up under the tree. In this one also there is a lot of information about owls, wonderful pictures, and maps showing where in North America the various types of owls mainly reside. This one will be easier for me to read since it's in English, and it will be interesting to compare the information in the two books.

Recollections of a Tour Made in Scotland, by Dorothy Wordsworth

This will probably be the most daunting of the books on my current plan. Dorothy was the sister of William Wordsworth, and the two of them took a tour together with Samuel Taylor Coleridge through Scotland in 1803. These are her diary entries and thoughts as well as accounts of their travels. I know I will revel in the old-fashioned writing style, but it's a big, heavy, hardcover book that I'll have to read at home. My Schwiegermutter gave this book to me last year for Christmas, but I haven't started it yet. This will be a good year for Scotland reads!

The Warmth of Other Suns, by Isabel Wilkerson

Here we have the winner of the "Not what I thought this book was about" Award. I'd put it on my Christmas list this year although I do not remember how I heard of it, and my kids bought it for me. It's much bigger/thicker than I was expecting (apparently I neglected to look at how many pages long it is), and the subject matter was a surprise as well. That makes me wonder, "What did I think the book was about?!" The beautifully-titled book is about the Great Migration in the 1930s of African-Americans from the South into the northern states. As I often do with a new book, I read the first few pages to get a taste, and I can say I am looking forward to reading more. I know I will learn a lot about something I hadn't spent much time on previously, and that is one of the main reasons I read!


We readers know what happens to our best-laid plans: new books slither across our radar, jump into our shopping carts, and demand our immediate attention. Most of the books I read in 2017 were unplanned, and quite a few had just been published that year! These are only thirteen books, which should leave room for interlopers along the way of the next twelve months, but several of them are intimidating in size. This is the closest I've ever come to setting a reading goal for [part of] a year, and if I fail miserably I'll probably never do it again. Just writing this post got me eager to get started, though!