Several of the bloggers I follow post now and then what they're reading or have read, and I always enjoy those. I've been binge reading for the past six weeks in one particular and new genre, which is one reason I haven't posted much lately. 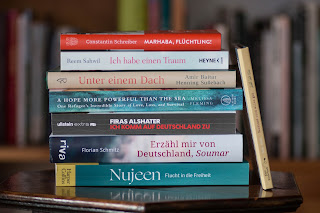 It all started with Erzähl mir von Deutschland, Soumar, and I wish I could remember how I heard of that book. I really liked it, written as almost a conversation between the author and his friend, a Syrian refugee who'd fled to Germany. I contacted the author, Florian Schmitz, to ask if there were any plans to have it translated into English, but a publisher has to be interested first, apparently. He told me they are planning a reading of the book for sometime in the fall in Stuttgart, and I just found out today when it will take place (Oct. 26 at 20:00 in a bookstore in Vaihingen).

Soumar and his story reminded me of many of my students and friends from Syria, and I found myself wanting to read more books like his. Amazon suggested I have a look at Ich komm auf Deutschland zu. The writer, Firas Alshater, is a comedian and a Youtube star - I have no idea how I missed that, but I've watched some of his videos and really like them! He usually gives advice to other foreigners about making their way in Germany, and his tips do not only apply to refugees. In his book Firas writes about his life in Syria before the war and during the revolution, his decision to leave Syria after being arrested, jailed, and tortured for filming what he saw happening around him, his journey to Germany, and his life since arriving here. That he can tell his story with a sense of humor speaks to his character and will probably appeal to many readers.

Both of these books go a long way to shattering - or at least challenging - assumptions and prejudices readers might have about Syrians, Muslims, and refugees.

The next book that crossed my radar while I was reading Firas' book was Nujeen: Flucht in die Freiheit. When I mentioned the book to my daughter, she said the late night talk show host John Oliver had talked about her. Nujeen has been unable to walk since birth and is confined to a wheelchair. She is from Kobani, Syria, and she and her sister fled to Turkey, across the sea in a flimsy boat to Greece, and over the Balkan route to Germany. At one point a BBC reporter saw her and interviewed her - which is what we see in the clip from John Oliver. She tells the reporter she would like to be an astronaut, and in the book we learn why. Despite the many obstacles made even more complicated by Nujeen's disability, their dream of living and learning in a country not torn apart by war spurred them on. Nujeen's sister pushed her most of the way, and at especially critical times others came to their aid and carried her.

So far all the books were in German, although I later found out that Nujeen's book was originally published in English, under the title Nujeen: One Girl's Incredible Journey.

I read reviews on Amazon of several of the books, and as usual I was more interested in the non-five-star reviews than the five-stars. I'm always curious what people with some criticism have to say. I was disappointed in some comments that said the writing was dull or cheesy, the story "lost interest toward the end," etc. These are real stories of real people who went through more suffering than anyone should. I love good literature, but writing style is not important here; the details and the journey are important. Of course, that's just how I feel.

A Hope More Powerful than the Sea

My fourth book was in English, but it is also available in German. The beautifully titled book, a Hope More Powerful than the Sea, was written by Melissa Fleming about the life of Doaa Al Zamel, a young woman who hadn't really intended on leaving her home to go to Europe. During the Arab Spring Doaa got involved in demonstrations in Daraa, their home town, which of course was risky. After it became clear that the opposition would not succeed and people identified as participating in the revolution were being arrested and killed, her family left Syria and settled as refugees in Egypt. While in Egypt Doaa met Basaam, who was at first unsuccessful at attracting her interest. Her family adored him, and eventually she warmed to him. Basaam wanted a better life for them than just living as refugees, and his dream was to go to Europe where they could make something of themselves. They were both hard workers and fighters, and he knew they could pursue the life they dreamed of. But first they had to make it across the sea - and Doaa was terrified of the water.

Another thing that ties these books together is the information provided about Syria before the war, during the Arab Spring, and during the war. Still, the focus is on their personal stories more than history and politics. Enough background is provided to give readers an idea of why the questions some have voiced are not so easily answered. "Why didn't they just stay and fight for their country?"  "Why didn't they just flee to a Muslim country closer to their home?"  "How could so many men just leave their wives and families behind while they fled for Europe?"  (I hate the word "just," in case that wasn't obvious.) These writers don't preach, but they do explain pretty clearly what life has been like in Syria.

After Doaa's heart-wrenching story I read one that had been in my Amazon shopping cart for months - Unter einem Dach ("Under One Roof"), by Henning Sußebach and Amir Baitar. Henning and his family hosted Amir, a Syrian Muslim, in their home near Hamburg for about a year. Each chapter or section of the book is written by one or the other of them, as they address all kinds of topics from food to religion to clothing to German culture and traditions. Amir, for example, is taken aback by couples openly and enthusiatically expressing their affection for each other in public. That just didn't happen in Syria. (Incidentally, I wanted to tap him on the shoulder and tell him I find that odd, too!) He doesn't understand why Henning doesn't change clothes when he comes home from work, but rather wears his work clothes (trousers and a shirt or sweater) until bedtime - as I sit here typing in the clothes I taught in this morning. I really enjoyed comparing his observations to my own - what do I find normal that he finds odd, and vice versa? Both Henning and Amir learned from each other and changed in little ways throughout the year because they had open minds and were willing to see the world through someone else's eyes. There were many things they didn't agree on, but they respected each other and gave each other space.

As with Erzähl mir von Deutschland, Soumar, I liked learning how the writers (the German and the Syrian) think and what goes on in their minds. I have spent a fair bit of time with my Syrian friends, but I still have so many questions and there is much I want to know. I know they'd be willing to answer my questions, but I haven't taken the step yet of asking them. One thing is certain - just like with Americans, Germans, Christians, and whomever else, each individual is his or her own person, and there is no way one can or should lump people together and make gross generalizations about them with any certainty. If you find someone saying to you, "Syrians are..." or "Muslims are..." you can stop them right there, because they are wrong. Of this I am sure.

The last of the books I have read and currently know of in this genre (stories of refugees from Syria) is Ich habe einen Traum ("I have a Dream"), by Reem Sahwil. Reem is not actually from Syria, but rather Lebanon. If I understand correctly, ever since 1947, when her great-grandmother was forced to leave her home in Haifa (Israel), the family had been living in a refugee camp in Lebanon (Baalbek). That means for generations they have known nothing but a basically hand-made container village with dirty streets, but somehow with a life of its own including small family businesses like bakeries and repair shops. Reem was born prematurely, and the medical facilities are nothing to speak of there. She was therefore unable to walk and confined to a wheelchair for the most part. Her father worked hard and borrowed money to pay for two expensive operations in Europe, and upon her third trip to Europe her father made her, her young brother, and her mother promise to apply for asylum on the grounds of medical need. Reem's father would follow later on the arduous Balkan route. Reem became famous for a while because of this encounter with Angela Merkel, who was blasted as a result for being stiff and cold-hearted. Near the end of the book Reem writes about that meeting in her school in Rostock and the aftermath, as well as her feelings toward Chancellor Merkel (which were and are far more positive than those of some of the media and many internet commenters).

Of course I am interested in these stories because so many details are similar to those I've heard from my Syrian friends and former students. The places, situations, fears, and uncertainties are familiar to me by now, and with every story I hear or read I am more amazed by the resilience of these people and what they were willing to go through to get where they are today. And they keep pushing forward despite the many frustrations of dealing with German bureaucracy and administrators, the German language, and a stiff and sometimes cold country with inflexible rules about what is allowed and what is not.

I do recommend each of these books and wish they were all available in English. I don't feel like I did them justice with my summaries, but I would read every one of them again.

Posted by Ami im Schwabenland at 18:56