You know you’re getting old when…

One day this week I took the local bus for the first time in a while to get to and from school because M needed the car. The ride down at 8:00 was fine, and the bus wasn’t crowded. But after class I caught the 13:00 bus back to our village, and the stop is in front of the Gymnasium (grades 5-12, I think). I waited for 20 minutes while more and more kids showed up and my mood waxed darker and darker.  At 12:57 the bus arrived, and a billion kids stood in a herd of pubescent filth jostling for position, cutting in the non-existent line, shoving past me… The bus driver (I’m calling him Gustav) opened the door and barked at the youths to move back. I admire this man, though I’ve never seen him before. The "horrible phalanx of pubescence"* oozed back, and as the first two students stepped onto the bus and dutifully flashed their passes, the rest of the swarm pushed forward again threatening to crush the youngest under their filthy, impatient feet. Gustav barked at them again, and they pretended to comply and remain orderly. A kid next to me moaned, “Der Tag war so schön, bis jetzt!” (It’s been such a nice day, until now!”), which was clearly a shot at the bus driver, though I nearly said to him, “My thoughts exactly!” aimed at the kid and his cohorts! Gustav was my hero for the day.

*Reference to one of my all-time favorite films. Can you name it?

He stayed at the door as kids passed, and every now and then he must have seen someone cut in the still non-existent line (Germans don’t know how to queue – it’s something expats have been pointing out for years), and he sent them to the back of the line. One little tart dared to say, “But I didn’t do anything!” Gustav puffed up his chest, shot daggers out of his eyes at the cheeky upstart, and said, “Do you need to have done anything? Get BACK!” He was like the soup guy from “Seinfeld.” Shit, I was starting to get nervous, knowing I’d have to hold up the line while I paid for my one-way ride.

I managed to get in about halfway through the mob, paid quickly, money in hand, and sat where no kid would ever choose to sit – right behind my hero, Gustav. I watched the rest of the show silently cheering on Gustav and high-fiving him in my imagination every time he sent one of the grubby little hoodlums back to the end of the pack.

After more kids squeezed onto the bus than I would have thought possible (some had to stand in the aisle), Gustav shot them one more “Don’t mess with me” look, closed the door, and we pulled away. Our next stop was the Bahnhof, and this is where I started to shake my head at humanity. Only three people got on, all adults – a Syrian man (I know him), a woman not older than I wearing a beautiful headscarf, and a German man who appeared dirty and probably homeless. Other than the one other adult woman who had sat next to me from the Gymnasium and me, the entire bus was filled with little kids ages 10 to 17. Not one of them acknowledged the adults who had just got on the bus to offer their seat. Ok, the men were not old, and perfectly capable of standing – and probably very used to doing so. The woman was also young enough and not apparently in any special need. But when I was young 150 years ago, it was just understood – kids do not sit on a crowded bus while an adult stands. I don’t even know how I know this, because although I remember taking the city bus often when I was young to get around town, I don’t recall it ever being crowded. I also don’t recall my parents or any teacher instructing me about bus etiquette. Perhaps it was just obvious?

I am certain this was also standard protocol in Germany not terribly long ago. In fact, I am happy to say that about two years ago on probably the same bus when I had to stand because it was full of smelly kids, a young girl offered me her seat. I thanked her more than was necessary, but told her it was ok – my stop was not far. I wish that girl knew that, two years later, I still remember her thoughtful - and apparently unusual - gesture.

My students have told me about witnessing this time and time again, because they do all their traveling here in Germany by bus and train. They have told me that in Syria it would NEVER happen that an adult – especially a woman! – would have to stand on a bus or train when there are children seated. Some of them have expressed surprise at such disrespect in German kids. I actually doubt that it is blatant disrespect, despite appearances. I think it is plain ignorance (though I do not know which is worse). I think it just wouldn’t occur to most kids nowadays, who are sitting comfortably in a seat on the bus because they were lucky enough to squeeze on ahead of the rest of the mob, to relinquish that seat to anyone else.

This is not something kids should have to be taught in school. This (consideration for others) is something parents should be teaching their children. Why are children not learning to give consideration for others when they are out and about? It might be because their parents are not good models. How much time do parents spend with their faces in their Smartphones rather than noticing teachable moments for their kids? Kids don’t learn what we don’t teach them.

You know you're getting old when you find yourself grumbling about TWO generations behind you - kids who don't offer their seat to adults on a bus and their parents! 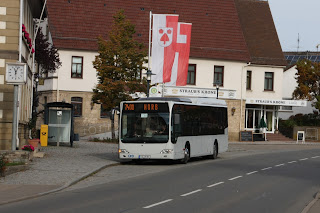 Posted by Ami im Schwabenland at 22:29