After our time at Sunnybank, Carol, the curator of the Van Riper-Hopper House, led us back to the museum. She showed us through the rooms and pointed out the items of interest to fans of Albert Payson Terhune. She left us alone to explore the Terhune room, which is full of paintings, photos, trophies, ribbons, newspaper clippings and notices, and first edition books written by Terhune, and some by his mother, who was also a well-known writer in her day.

My daughter read the framed story about Wolf, Lad's son, who died saving a mongrel dog from being run over by a train, and when I said "Incredible story, isn't it?" she looked at me surprised. "You read this that fast?" (I always read more slowly than she does). "I know the story well," I said with a wink.

The highlight for "Laddicts" is probably Lad's round leather collar and a tuft of mahogany-and-white hair attached to an envelope labeled in Anice's handwriting: "Lad's hair". As I learned recently from a newsletter posted on the Sunnybank-Terhune Collies Facebook group, "Laddie's collar" was found wrapped in tissue inside a large trophy cup that the Terhune Sunnybank Memorial Fund acquired in 1973 along with 17 other trophies won by the Sunnybank collies.  This collection had been given by Anice Terhune to a friend and neighbor, who later gave it to a housekeeper who admired the collection and Terhune's stories. The housekeeper was told to hang on to the collection for a while, because it would someday be worth something. Indeed!

We were also able to see a few other treasures - an apholstered chair of Bert's and a pair of his trousers - he was 6 feet 2.5 inches tall, and the waistline came up to my chest! Carol also encouraged us to look through an album of Sunnybank and the Terhunes, and I absorbed every page. She showed us the Terhune books in their library, which anyone can read on-site in the museum or on the porch on a pleasant day.

We went away with an abridged version of a Terhune story, condensed by Carol herself and illustrated so as to be a coloring book. What a lovely treat!

Our next stop was the Dutch Reformed Church in Pompton Lakes, NJ. I forgot to take a picture of the church itself because my interest was in the cemetery. I had seen plenty of photos of the Terhune plots and headstones, but I wanted to see them for myself.

The cemetery is not large, and so the family plot was not difficult to find.

Bert and Lorraine's daughter, also called Lorraine, rests here, too, next to her mother, who died a few days after giving birth, at the age of 23.

But Bert and Anice are not in the family plot. Their resting place is just a short walk away and I recognized it from a distance. 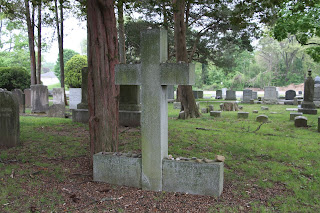 My daughter finds it a bit odd that I "enjoy" going to graveyards to see headstones and burial places of people important to me. I can't necessarily explain why, but I think it is a ritual of closure. In the U.S. the experience is perhaps less inspiring than in Germany, where the cemeteries and gravesites are stunningly beautiful (and much older, of course). Still, of course I wanted to see Albert's & Anice's graves.

By now the whole family has passed on, as far as I know. Only the descendants of the collies live on, mainly traced back to CH Sunnybank Thane.

I have one last thing to say about this writer, Albert Payson Terhune. His biographer mentioned, and Terhune even said himself, that he was not a great writer. His stories were popular, and he wrote a great many of them; but I read several times that he does not rank among the great American writers. Ok, fair enough - he was no Hemingway or Thoreau. But by reading his stories I expanded my vocabulary in ways that young readers today cannot (by reading popular modern stories and novels). Terhune also had a beautiful sense of language and - again, unlike many writing today - knew his language well and didn't make grammatical mistakes. He wrote correctly - not as people speak (you won't find "Me and my friend..." or "Lad liked to lay on the veranda" in his stories!) - and that made a great impression on me. So while he may not have earned a place in an American Literature course curriculum, I will always be one to say that he was well beyond the league of many of today's popular writers in style and language mastery.

Thus endeth my literary pilgrimage to Sunnybank and the world of Albert Payson Terhune. It was a special trip, and one I needed to make.

Email ThisBlogThis!Share to TwitterShare to FacebookShare to Pinterest
Labels: Off topic, personal, travel