When I was about eight years old, I received in my Christmas stocking a book called Lad of Sunnybank with a beautiful mahogany-and-white collie on the cover. Yes, I was a child who loved receiving books for Christmas and birthdays - as long as they were about dogs or horses. I had never heard of Lad before, but from that day on I was a dedicated follower and fan of Lad and his Master, the writer Albert Payson Terhune.

I read and re-read the Lad books and then found in our library Irving Litvag's biography of Terhune, his wife Anice, his family estate, Sunnybank (called simply "The Place" in his stories), and his dogs. I read about his other collies and collected several of his books about them to read later, but for me there was only Lad. I begged my parents for a collie with "absurdly tiny white forepaws" who would save his human deities from all sorts of perils, and they eventually caved and got me a Sheltie. He was a gorgeous dog, but when presented with the opportunity to emulate Lad and thwart a burglar who broke into our home one night, he slept through the crime. The reprobate made off unassailed with my mother's purse and a VCR while our non-Lad dozed contentedly on the foot of my bed.

Some people read a book set in Paris and long to travel there. Some people watch a movie set in Tuscany and dream of moving there. For me it was Sunnybank, on the shore of Pompton Lake in Wayne, New Jersey. I was saddened when I learned the house had been torn down in 1969, but relieved to learn there were dedicated people who had been working to restore what was left of the grounds and the dogs' graves. The Place is now a park maintained by the Wayne Township Department of Parks and Recreation and visited frequently by Terhune devotees.

When I started making plans to visit my daughter in Philadelphia this spring, one of the first things I did was check the distance from her home to Sunnybank. Definitely do-able. She picked me up on a Friday at the Newark airport and we headed toward Sunnybank. After an overnight at a lovely AirBnB accommodation hosted by a young German woman in Montclair, NJ, we drove to the Van Riper-Hopper House in Wayne. I had made contact with Carol, the curator, just two days earlier and when we arrived she closed the museum and led us to The Place. It was starting to rain, but I begged Mother Nature to hold off just for an hour.

I warned my daughter to brace herself for weird emotion - at which she rolled her eyes - as we turned into the drive. The parking lot is located where once the wisteria-covered house stood, on a rise looking down toward the "fire-blue lake." Carol handed me an umbrella and wished us a pleasant visit.


I didn't know where to start, but I knew I wanted to end at Lad's grave and therefore didn't look for it. We strolled down to the lakeshore and the gazebo so I could get a good look at where the house had been and the lake Lad swam in to cool off on warm summer evenings. From there we went around to the root cellar and the replica puppy yard, and then to Champion Rock where many of the best-known dogs are buried - Lady (Lad's mate), Wolf (the only offspring of theirs who survived), Bobby, Treve, and Anice's fluffy Persian cat, Tippy. 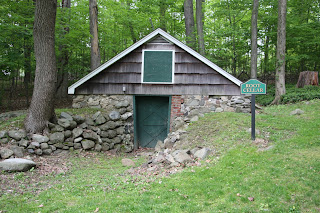 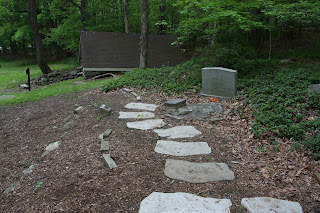 We passed the lily pond and statue of Jack, the bullfrog that resided at Sunnybank for something like 20 years before he was killed by one of the careless drivers that Terhune despised. 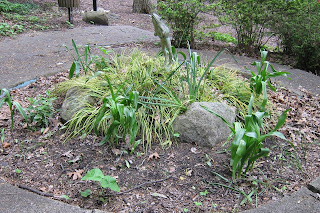 To be honest I was a little disappointed in myself by this point. I was snapping pictures all over to preserve these views for later and was soaking in the experience, but I expected more of myself. I should have just sat down somewhere and let the images in my mind and memory play around. Was my camera in the way? I need photos for me - but maybe this one time I should have left my camera in the car. I didn't want to see what was there and visible through the lens. I wanted to see the house, the winter kennel, Bert himself typing away on his tiny typewriter, and most of all I wanted to see a dozen collies romping around the grounds. And  Lad, even though he didn't like strangers and would have been aloof if not downright annoyed at my presence.

Suddenly we were at Lad's grave, in a little shaded nook just off the edge of the driveway. I brushed away some wind blown leaves from the headstone, remembering that Lad was "absurdly vain," and sat on the rock next to the grand collie's grave.

My husband would have echoed Bert's words as reported by Litvag: "Why folk should make pilgrimages to the grave of a dead dog is beyond my understanding. [But come they do: and some bring roses...this for an animal they never saw in life.]" But I agree with Litvag's thoughts as he stood there in this same spot 40-some years ago: "Yes, Terhune, you did know why. You understood, you old fake. You know." 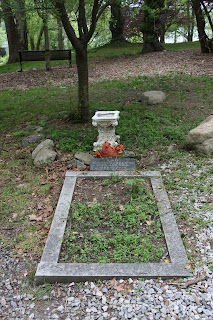 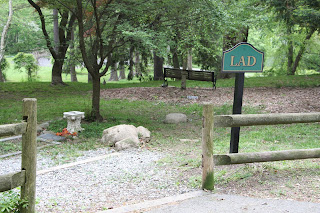 Lad had died in 1918, but he was alive for me in the 1970s when I first read his stories. Only a few photos of him remain, and in them he's not even the most physically beautiful collie I've ever seen. But he's Lad and I cherish every image. I have long imagined heaven like the Sunnybank in my mind - a majestic old house on a hill surrounded by forest and overlooking a lake. And with collies everywhere.

A bench dedicated to Terhune's biographer, Irving Litvag, is a little way off from Lad's grave under some trees, and up the hill a bit are the graves of Bruce ("The dog without a fault") and Jean, just below the Evening Lookout. We sat there for a few minutes, too, taking in the view. We made one more circle down along the lake, past the rose walk, the former location of Terhune's mother's Garden from Everywhere, the gazebo again, and back up to the parking lot.

Carol was waiting patiently for us, doing museum work from her car, and after a farewell glance and a walk up to the entrance so I could take a picture of the winding drive I had traveled down so often in my child's mind, she led us back to the museum for some time in the Terhune room. 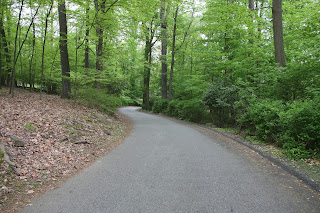 To my daughter's relief, I did not get weepy during our visit. But back home while re-reading bits of the biography and several Lad stories - especially Terhune's description(s) of finding the lifeless Lad on the back veranda of the house in September, 1918 - I choked up. I'd admit that I had to dry my eyes as well, but my daughter will read this... ;-)

I am so glad I was able to visit Sunnybank. Now when I look at the old photos, and even the current photos other visitors to The Place post on the Sunnybank - Terhune Collies Facebook group, they mean so much more. And I am eternally grateful to the good folks who have worked so hard to keep Sunnybank alive.

Thank you also to Krissy M. for permission to use here the old photos from the Terhune Sunnybank Memorial shared on the FB group, to Carol for your personal attention that day, and to Judy for getting me in contact with Carol and answering my questions. Although it's of little interest to my regular readers who come here to read about the differences between life in Wisconsin and in southern Germany, I will write another post about the rest of our day - the visit to the museum and to the cemetery in Pompton Lakes.

But for now, farewell from Sunnybank.

To my readers who are readers: Has a book, an author, or a character ever made you want to travel somewhere just to see where they lived?

Posted by Ami im Schwabenland at 09:02