This month's Highs and Lows post is being supplanted by the following because 1.) I didn't have any lows this month - seriously, not one! - and 2.) most of my highs had to do with my mom's visit from the U.S..

While my dad is trekking and sight-seeing in the Himalayas, my mom popped over for a visit with us for almost two weeks. She arrived a week ago today, and one of the nicest things about her visit is that nothing is rushed. She has no "official" reason for being here - no cruise or other European vacation, no official exchange business, no parties to attend.

What this means is that my mom has spent some days seeing my life and what I do from day to day. This often includes hours of "down time" - she's taking a nap as I write this. We've been relaxing to the point of being dull some days, but everything we have done has been really enjoyable so far! There's more to come next week, but here's what we've done in the last week.

M and I have enjoyed cooking together for her.

Forewarning if you ever plan to visit us: this is not a low-fat household and we don't know what to do for vegetarians. We cook everything from scratch, though, and buy as much from local farmers as possible. But it's all about the meat.

My mom brought a whole bunch of things I'd asked for, plus one surprise - a Marguerite Henry book I fondly remember from my youth, Five O'Clock Charlie! This was a gift from the son and daughter-in-law of my grandmother's sister. I associate this book with memories of my mom's Aunt June, because I always found it on her shelf and read it cover to cover when I visited. 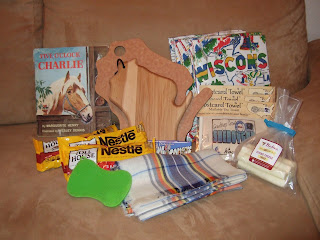 Other items pictured: cutting boards in the shape of Wisconsin, refrigerator magnets and tea towels of Wisconsin and Sheboygan, Nestlé semi-sweet chocolate chips, a scarf my dad bought me in Argentina, a silicone pot scrubber, and Baker's string cheese (there are no words for how much I love this string cheese, bought fresh from the factory near my hometown (and then frozen for the overseas journey). The Wisconsin-themed items are for when I have occasion to give a gift and want to give something from the homeland.

On Monday we drove to Esslingen (I drove!!) to have a lunch meeting with friends who are in charge of the Esslingen-Sheboygan exchange and then met for ice cream and a chat with the Sheboygan, Wisconsin exchange students who are spending five months in Esslingen. 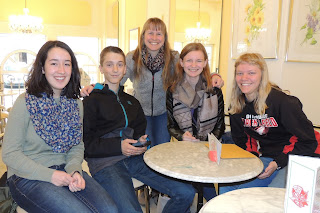 On Tuesday we drove to the Spargelhof in Bondorf where I always buy our asparagus - picked that morning - and in the afternoon we met six of my (former) students from Syria and Eritrea at a café in Horb for coffee. I was definitely looking forward to introducing them to my mom, and we had a lovely afternoon! 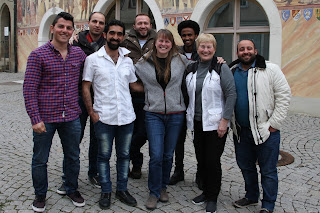 Wednesday was my mom's 74th birthday, and she was treated to a lazy morning while I went to M's office for the English lesson. In the afternoon we picked up my Schwiegermutter from the Bahnhof, and in the evening we all four had a wonderful dinner at Straub's Krone.

P.S. No, that is not a missing apostrophe in "Moms Geburtstag". In German possessives do not take apostrophes.

My mom and Schwiegermutter came with me to my Englisch-AG (where I teach conversational English at a school for students with mild learning disabilities), and we did several activities focusing on the differences between American and "proper" English, as I often call the two languages. It often seems true that Americans and Brits are "separated by a common language" (George Bernard Shaw)! 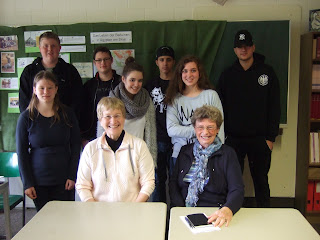 On Thursday I drove my mom and Schwiegermutter to Nöttingen, where we met the couple living in the house my great-great-great-great grandfather built in 1797. They are such warm and gracious people! They had prepared for us delicious homemade cakes as well as a CD full of information about the village and the house - including details about the renovations they've done. The house is under Denkmalschutz, and when they gave us a tour they pointed out the parts of the structure that are original. They helped us visualize what the house and rooms looked like when Jacob Jung lived there. 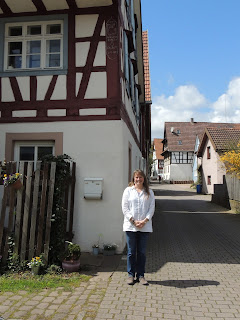 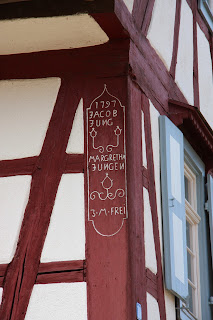 My ladies' riding lesson is on Friday mornings, and my mom was kind enough to come along and snap a few photos despite it being a bit cold. This was nice for me because I could finally have some pictures of me with Mallory, the little horse I ride most often. 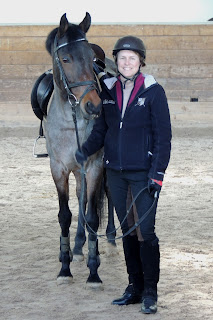 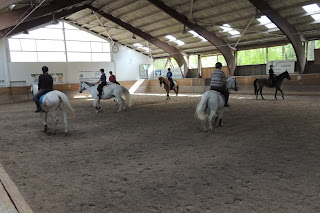 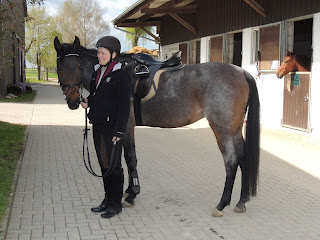 On Friday afternoon we were invited to the home where several of my Syrian students live, and they cooked for us several Syrian dishes: Taboule, Freekeh, and a dessert. The food was delicious, and the Deurabisch (Deutsch-English-Arabisch) conversation was very interesting! We talked about religion, customs in Germany, Syria, and the US, their journeys from Syria to Germany, and their hometowns. They showed us on Google Maps where they used to live (much of which has been destroyed by the war). Several of these men lived in villages outside of Damascus just a few kilometers from each other, but they first met when they arrived in this tiny German village back in September 2015. 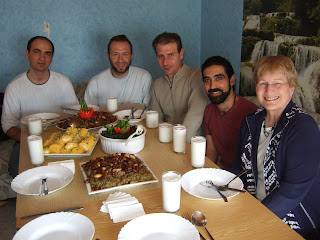 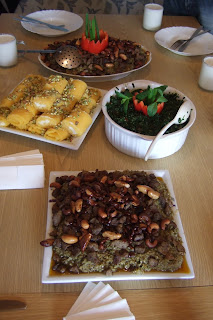 
The following highs happened before my mom arrived... 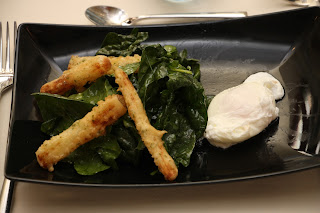 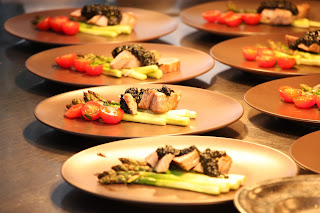 That's it for April! I hope you had a good month as well!

Posted by Ami im Schwabenland at 15:19