Due to a lack of ideas lately but inspired a post by Courtney from Welcome to Germerica, I thought I'd try a "day in the life" post. Saturdays in Swabia are mainly about working around one's home and Hof, so I thought I could also use this as incentive to be busier than I usually am. Spring is upon us, so there's plenty of Gartenarbeit to keep us busy, and of course there's the Kehrwoche, which should be taken care of today.

Mother Nature had other plans for us, however. It rained all morning, which meant that indoor work was the new plan for the day. There's always plenty of that, of course.

First things first, though. A cup or two of coffee, a check for emails, and a look at the weekend newspaper. 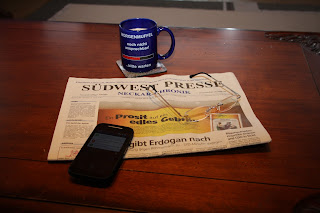 I had also received an SMS (text message) from my dad, who is trekking in the Himalayas with our 80-year-old friend. He said they had an exhausting day of hiking today but had made it to their lodge. While I got caught up on the news, M watched the qualifying for this weekend's Formula-1 race in China.

After the qualifying M went to the office to do his Saturday jobs which happily didn't involve cleaning up cat puke, along with a few other tasks that are hard to get done during the week when the phone is ringing constantly.

For me the next order of business after getting cleaned up and ready for the day was a walk to the butcher, since they close at 12:30 on Saturdays and I had lazed away too much of the morning already. 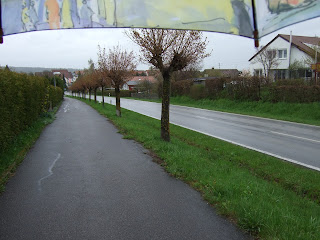 Still raining, hence the umbrella. The butcher is only an 8-minute walk from home, though, and there's no way I'd drive there regardless of weather.

I always pick up the weekly Lukullus magazine at the butcher, which has a different theme every week and ideas for recipes. Since Spargelsaison started locally on Thursday, this issue was very timely. 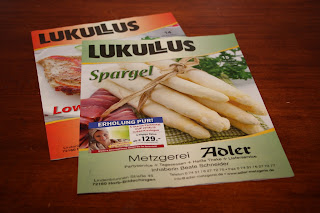 I took some time to have a snack and look through the magazine when I got home. There isn't a recipe in there that sounds as tempting as the one we like best, but we might try one or two anyway.

Since there was no more delaying it, it was time to start tidying up and cleaning the house. It's thoroughly embarrassing that I cannot manage to keep the house clean and tidy for more than a few days. I keep wondering "How hard can it be - just always put everything where it belongs when you return home from somewhere, and work on one thing at a time." And yet still, the clutter reigns and the house looks in disarray.

I threw in a load of laundry (because the washer needs nearly three hours and the dryer another 2) and started in the bathroom, which is the job I hate the most. A Swabian isn't supposed to whine about cleaning, though, so I restricted myself to an occasional dramatic sigh.

When M returned home he tackled the monster windows in the Wintergarten, which had been too long neglected. 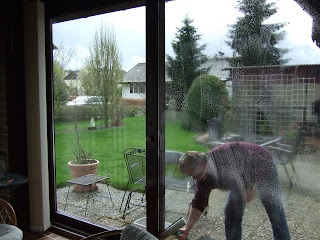 I did the ones in the bedrooms, which was a much smaller and quicker job. But housework is boring to write and read about, so what else is there to do on a Saturday when it's raining?

Around 14:00 I checked Facebook and emails again knowing my peeps in the U.S. would be starting to awaken. Then I laid out my after-chores reading plan. 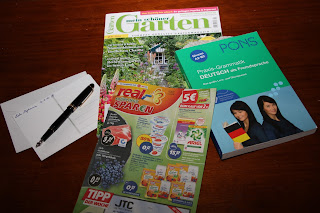 The May Garten magazine arrived the other day, so I looked through that for seasonal instructions and ideas in the hopes of killing fewer plants than I did last year. Then it was time to see what's on special at Real next week and write my grocery list. After that I started writing to my daughter about my experience at the Ausländeramt the other day, and I intended to finish by reviewing some German.  There are still too many things I cannot confidently say in German, and it's getting disturbing.

Dinner tonight was leftover grilled vegetables and steak (Entrecôte) from last night, which was absolutely delicious but not photo-worthy.

I'm sort of between books right now, so I'm not sure yet what I'll be reading in the evening while M watches TV. Since my afternoon didn't include a nap, which is quite unusual for me, I'll probably fall asleep on the sofa while pretending to read.

Update: Shortly after I wrote that last paragraph I fell asleep on the sofa. I'm probably good to go now for the rest of the evening and might be able to stay awake until bedtime.

After dinner we watched "die Pferdeprofis", a show in which two horse trainers help horses overcome their people problems. I like this show, maybe just because I get to watch horses for 45 minutes, but one thing bothers me every time. The male trainer never wears a helmet when he rides, nor do any of his assistants, I think that's a bad example to set, and it makes me grumble. He usually works with horses and people who do western riding, but still.

I'm finishing the evening with a combination of German learning, writing, and reading. M is watching a celebrity Völkerball tournament, which is kind of like dodgeball, and channel surfing when that gets boring, but he mutes the TV for me when he steps out.

Next Saturday I'll be picking up my mom at the Stuttgart airport because she's visiting for two weeks!

What did you do today? Did you have a good and productive day?