This weekend M and I attended our fourth cooking class at Straub's Krone, and this time the main ingredients were wild game, pumpkin, and quinces. Once again we had a great time, and even I am becoming more comfortable taking on various tasks (though if I had my druthers I'd keep my participation to observing, listening, and taking pictures - and eating!). 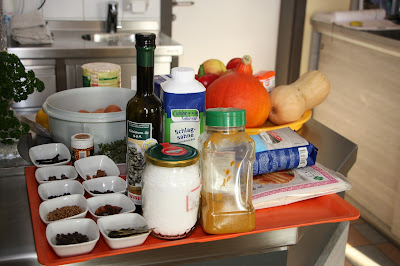 The menu for today was:

*Zweierlei is another brilliant German word that has no perfect equivalent in English. When you see "zweierlei" on a menu followed by an ingredient, that means what you'll find on your plate is that ingredient prepared in two different ways. This was "zweierlei Rosenkohl", and we had loose blanched brussel sprout leaves as well as brussel sprout puree.

As always we began with Martin Straub (the Chefkoch) going through the menu explaining what we'd be doing as well as telling us what substitutions can be made, answering our questions, and elaborating on his instructions. One of the participants this time was on a gluten-free restricted diet, so Martin explained the changes he'd made for that: rice cakes in place of breadcrumbs, gluten-free flour and where to buy the good stuff, etc.. I took notes ("If Quitten are steinhart, add Wasser & cook longer") because I can't remember anything unless it's written down. Since both languages are swirling in my head, my notes come out in messy Denglish.

Then it's time to don our aprons and plunge in! Martin knows me well enough by now to suggest easy tasks for me, which I appreciate. I took care of the brussel sprouts - a tedious, repetitive job which was perfect for me. It's not that I'm helpless in the kitchen, but when I'm part of a cooking team, I lack the confidence to do unfamiliar things. I'm often afraid I didn't understand exactly what I am supposed to do, and that freaks me out. Martin knows that M, on the other hand, can do pretty much anything in the kitchen with confidence. So when M is taking care of a task, Martin can tend to his other students.

We spend about two hours doing every preparation step that can be done first, under Martin's guidance. He asks, "Ok, who wants to cut the meat (wild boar)?" and someone steps up. "Who wants to start on the pumpkin?" and so on. Even if you have never worked with pumpkin or quince before (as M and I have not), he'll explain very clearly what you need to do.

I seriously have no idea how he keeps that all straight. When he's doing it himself and with his crew, ok - but with strangers? With strangers he has no idea whether they know what to do or not? And he never loses his cool or gets upset - it's not like cooking with Gordon Ramsay! If someone screws something up, he either says "Ok, let's do it again", or he shows us how to fix it. The cooking class started at 10:00 and ended around 16:00. I have a hard time keeping my patience for 45 minutes teaching the Englisch-AG!

M dealt with the pumpkin for the mousse and the soup. 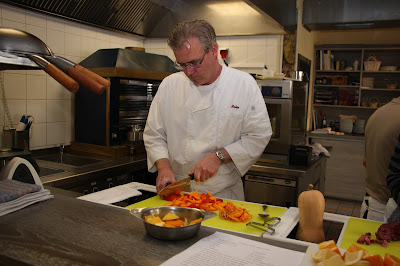 The butternut squash next to him makes me think of Jerry from the Veggie Tales.

Two of the other participants peeled and cut the Quitten. I had never in my life heard of Quitten, even when translated into English - quinces. I was certain we don't have those in the U.S., but when I was in Wisconsin in June I visited a friend and we wandered through her garden. She has a quince tree!

I have to say, the Wildterrine was really tasty, but the Quittenchutney topping was amazing!

M is pretty sure we're going to make this at home next time we have guests - if we have them when Quitten are in season.

That's yet another thing about Germany that is special - since they care where their produce comes from, far preferring local produce to stuff brought in from other countries on trucks, they pay attention to seasons. Fall is pumpkin and quince season in Germany, and they happily order dishes with either. But they would be quite sceptical if they saw those on a menu in March.

Pumpkin is a huge thing here. Nearly every German restaurant adds a special Kürbis menu in the fall, and there's even an annual 9-week long pumpkin festival in Ludwigsburg, which you can read about on the Stuttgart-based blogs Traveling Hopefully and Kaffee und Kuchen. In Wisconsin the only thing I ever heard of anyone doing with (canned) pumpkin was baking pumpkin pie to serve at Thanksgiving. Otherwise we carve jack-o-lanterns out of pumpkins for Halloween, some roast and eat the seeds, and after Halloween - hopefully before the pumpkin has started to rot - it gets thrown away or tossed into a field.

But back to the cooking class...

The saddle of venison was cut from the bone and freed of the fat and sinews, and then browned. The bones were also fried up to be used for the sauce.
Then the venison was wrapped in its pancake jacket, then in a tin foil wrapper like a bonbon. 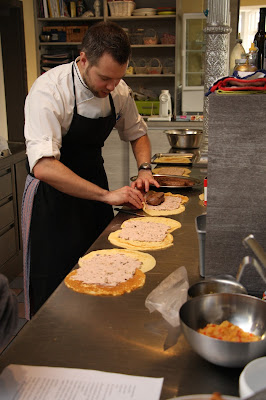 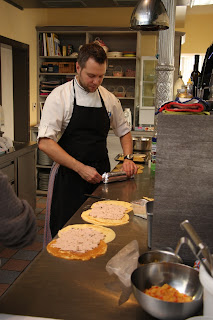 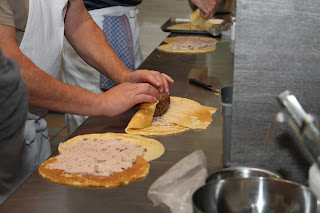 Most of my photos show Martin doing the steps because I'm never sure how the other participants feel about having their pictures taken, and I try to avoid getting in their way with the camera. Martin often does an example, and then we students take over. Martin is used to my camera by now (though I have a photo from our first Kochkurs of him giving me an exasperated look which clearly said "Enough with the pictures!"), and he knows what I'm doing and pays me no heed.

So we did lots of preparations, managing not to trip over each other too much, and eventually the starter was ready. It was, of course, time for a glass of wine, and Martin had chosen a Rotling - a mixture of red and white. 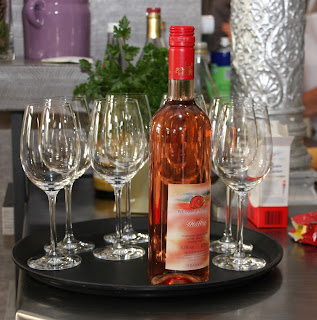 We toasted to the fact that no one had yet injured him- or herself or screwed anything up beyond saving, and sat down to enjoy our starter. We chatted, shared some stories, asked Martin lots of questions while we ate.

When we finished we brought our plates to the kitchen where the whirling dervish that is Martin's kitchen assistant had washed everything we'd touched up to this point, and we carried on with the next steps.

Since we now have a Thermomix at home, I was able to confidently use Martin's to mix the brussel sprout puree and then the pumpkin soup. Seriously, all that means is I put the cooked mush into the mixer and pureed it, added some salt, pepper, and nutmeg (Germans put freshly grated nutmeg in just about everything), mixed it again, and poured it into a bowl. Others had done the hard work.

I haven't ever liked anything pumpkin, and still these were both delicious. I would definitely like to do the spring rolls at home, though M would prefer them to also have some meat in them.

Right. I'll bring this post to a close with the rest of the dishes.

Admittedly by this time we were stuffed, and dessert was yet to come. I must say that I'm proud to have been in charge of both versions of brussel sprouts without having screwed them up. M actually saved the loose blanched leaves without even knowing it until 5 hours later when I admitted something I'd misunderstood, but that will remain our secret.


This Kochkurs was every bit as enjoyable as the others we've done. We meet nice people, we learn lots of great tips that help us in our own kitchen, and we eat some truly excellent food that we wouldn't have tried cooking just for ourselves. We don't always cook at home what we've prepared in these classes, but that's not the point for us anyway. We have some new ideas, we've got all the recipes, and we have learned plenty.

I asked Martin if he thought he could do a cooking course in English or Denglish, and he thinks he could do that. I've offered to translate the recipes and instructions, so bloggers in the Stuttgart area, you may be hearing from me soon! :-)

You can read about our second Kochkurs from March this year here.

Posted by Ami im Schwabenland at 17:36