Things That Make Me Chuckle

This representation of "an American breakfast," recipe included, from a TV magazine that came last week:


Hm. What's wrong with this picture? Pancakes - sure, we Americans eat those. But we don't eat them with a fruit compote garnished with vanilla beans. We smother those babies in butter and maple syrup or fill them with chocolate chips and eat them with a side of bacon. Americans have been known to eat pancakes with fruit, but then they're stuffed with blueberries (and topped with butter and sticky-sweet blueberry syrup) or covered with sugary strawberries and a huge dollop of whipped cream, like this:

Click here to see what you can get at IHOP (International House of Pancakes - a popular American restaurant chain), but don't be fooled by the tiny spoonfuls of whipped cream on those pictures - they put four times that amount on the pancakes and waffles when they're not being photographed for the website.

Now this...this is the kind of breakfast we eat in Wisconsin: 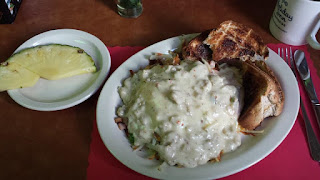 I don't actually know what that is, but a relative posted it on Facebook a while back, and I saved it with the caption "WTH Breakfast". There's definately some buttered toast there, and piece of pineapple slapped on a plate that's too small ("presentation" is something for only the finest restaurants in the U.S.). That looks like some kind of chunky gravy dumped over hashbrowns and diced ham. I would guess there's an egg under there somewhere, and probably onions.

It makes me giggle to imagine a German having breakfast at that place, choosing something unfamiliar from the menu to try something new and exotic, and getting served....that. It looks like it could be a compilation of what the previous four diners didn't eat.

Here's another typical American (Wisconsin, anyway) breakfast - one I ordered: 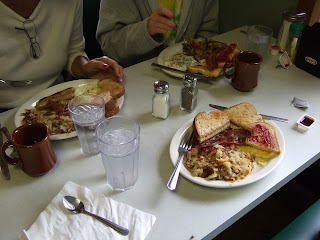 My friends had similar breakfasts - it's good hangover food (not that we were hung over!). Hash browns, eggs, bacon or sausage - or both, whatever - and buttered toast with jam, all squished onto a plate. Since there wasn't enough room, the toast is on top of the bacon, which is on top of the eggs.

So when  Americans travel to Germany, book a room "with breakfast" in an economy hotel*, and wake up to find this...

...they understandably stumble around in a confused daze looking for the "real" food.

"And for the love of God, where is the BACON?!"

"What are we supposed to do with cold cuts, cheese, and vegetables?!"

"No, seriously. We're having sandwiches for breakfast? I want hash browns."

"We call those Rösti. You can order those with dinner."


Andere Länder, andere Sitten, or different strokes for different folks... I can enjoy a good ol' Wisconsin breakfast during a visit, but I find the typical German breakfast more sensible.


*If you book at a more expensive hotel, such as the Mövenpick, you'll find a breakfast buffet to die for - hot food, cold food, fresh bread with every possible thing to put on it, bacon and sausages, and the sugary cereals and sweet rolls that Americans expect.

What do you like for breakfast when you travel? What about at home?