The neighbor's cat and I have been having a bit of a territorial dispute this summer. It thinks it can come into our house, and I say it cannot. I'm not sure which one of us is winning, but judging from the pounding of my heart earlier, she scored one today.

On nice days we like to leave our windows and doors open.  We don't have screens on most of the windows and no screen doors. When the front door is open, it's open wide (and admittedly a bit of a security risk), and our Wintergarten (sunroom) only has big ass big glass sliding doors. When I'm home I tend to leave the Wintergarten door open all the time, especially when I'm working in the garden.

Despite what the cat thinks, this is my house, and I will damn well leave the doors open when I want to. That is not an invitation for the local wildlife to come in for tea. Yes, I have to deal with a few flies, some wasps, and the occasional dragonfly, but thankfully no birds have flown into doors or windows that were open (a few have slammed into ones that were closed with a resounding thud).

A few weeks ago as I was at my computer in the (home) office, I got up to get something to drink and bumped into the cat creeping in through the front door. I was startled, of course, and yelled something like "What the fu...!!" She dashed back out the front door and down our walkway to the street.

Four nights ago I came into the office to shut down the computer before going to bed, and a horrifically enormous large hairy black spider was on the wall in the corner just next to my computer. I let out my spider shout, and my hero came armed with a can of Raid to take care of it. Even he admitted that was the biggest one he's ever seen inside the house. Then I started to wonder where that beast was while I was sitting at my desk earlier that evening... M said it probably came in through the tilted window because it was cold outside that evening, and although I'll go with that, I'm still checking for big spiders under my desk before I sit down.

Then today, again I'm at my laptop researching things to do in Edinburgh for our upcoming trip, and I wanted to check something on the map I'd left in the living room. The front door was closed but the Wintergarten door has been open all day. Out of the corner of my eye I saw something dark and hairy scuttle on the floor, and I freaked out. I'm still on high alert because of the damn spider, after all. This time, as if I should expect a response, I yelled, "What the hell are you doing in this house?!?!?!" as she scrambled on the slippery floor and dashed back out the open door. She was half way out before I knew for sure what/who she was. Thank goodness at least it wasn't a spider.

The cat in the photo above was another uninvited houseguest at my Schwiegermutter's flat 8 years ago. He climbed up a tree and landed on her second floor balcony, peering in at us through the glass door. We invited him in, and he spent the evening curled up on the sofa after a snack of pork tenderloin (it was all we had). He returned the next night and the next, and we thought he was gorgeous. But that was not my house. And I digress...

In Germany roaming cats have to be tolerated. In our local newspaper just the other day there was a letter in an advice column from someone asking if he can do anything about the neighbor's cat wandering through his yard, pooping in the grass, etc.. Nope. If the cat causes damage to anything (scratches the furniture, damages plants - as if that's easy to prove), then the owner has to pay for it, but otherwise we need to put up with them. Cats go on walkabout and refuse to heed property lines, posted signs, or adages about what curiosity can do to them.

I can live with the cat skulking through our yard (I don't have a choice anyway), and M has to live with cleaning cat poo off the mower blades, but we do not have to accept that or any other cat slithering into our house. But what to do?

Since our nephews came to visit one hot weekend this summer, we now have water pistols, and I know how much cats like water. 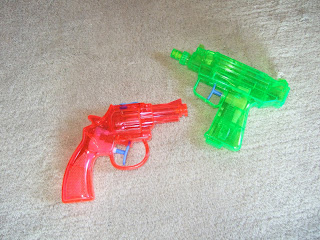 With one in each hand, I could go full Tatort mit Til Schweiger on that cat if she enters my house again, but of course that's just wishful thinking. I don't believe in keeping loaded guns in the house and my aim sucks anyway.

So the only thing it seems I can do to keep the neighbor's cat out of our house is to keep the doors closed when I want them open. And that just makes me angry.*


*For the record, I'm not angry at the cat's owner staff; the neighbor is doing nothing wrong, so this will not be a cause of neighborhood strife. I just want to give the cat the message that it is not welome inside our house.

Posted by Ami im Schwabenland at 23:14

Email ThisBlogThis!Share to TwitterShare to FacebookShare to Pinterest
Labels: home, Off topic