Strasbourg and the EU Parliament

Last month I was invited by a friend of mine to join a group of Rotarians on a day trip to Strasbourg, France. The group was invited by Herr Joachim Starbatty (then AfD, now ALFA) to visit the European Parliament, sit in on a plenary session, talk with him about the EU, and have a city tour as well as dinner with him in the evening. I felt very privileged to be included!

During the short time we were in the assembly hall, the representatives were debating the pros and cons of TTIP, the proposed and quite controversial free trade agreement between Europe and the U.S.. We could use headsets and set them to our language of choice to listen to the interpreters. I found that fascinating, though admittedly I have not followed the debate enough to feel informed.

I would have liked to learn more about the job of the interpreters, and I wish that with each speaker (who only had 60 seconds to relay his or her thoughts), the screen that displayed their names had also indicated which country they were from. I suppose, though, that part of the point is to speak representing the EU as a body rather than individual states.

We met with Herr Starbatty in a smaller room just for us, and he told us about his responsibilities and his role as MEP (Member of the European Parliament), and he answered questions. I found him to be very personable and I enjoyed listening to him though I didn't understand everything.

Lunch was next, so our bus brought us to the Altstadt. By now it was beastly hot, and I had to just decide to embrace the dripping sweat. Since the reservations were made before weather could be determined, our tables were inside, where there was no air conditioning and no breeze. The palms of my hands were sweaty, and it was too hot to enjoy even a small glass of wine. Water, water, water. Flammkuchen was pre-ordered, and it was very good. Flammkuchen is an Alsatian thin crust pizza, for simplicity's sake. 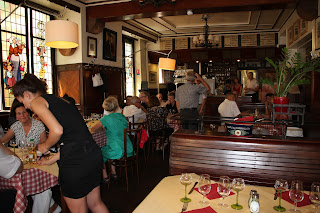 After lunch we met our tour guide, and she gave us a very interesting tour of the Altstadt. If it hadn't been so flaming hot, I would have remembered more about what she told us. She was an excellent tour guide who clearly enjoyed her job and was very knowledgeable and enthusiastic. And I could listen to French speakers speak German all day. Their intonation is lovely! 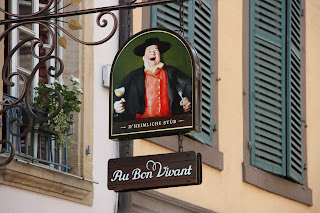 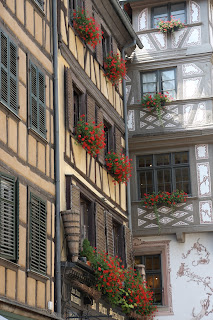 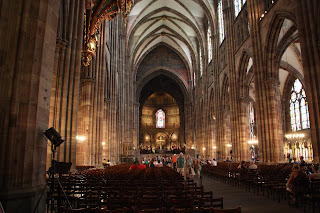 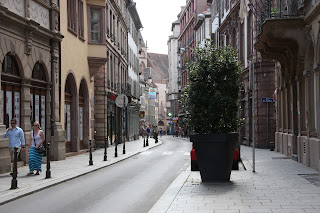 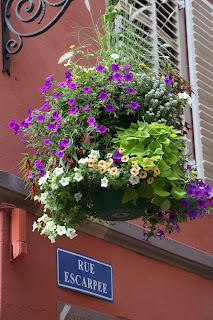 After the tour we had two hours of free time, and my friend and I walked around the town exploring with Frau Starbatty and her guest. Eventually we found a cafe and I had a refreshing Radler (beer mixed with Sprite). We met the group again for dinner in another hot restaurant, and by then I was so done taking pictures that I didn't even take one of our food.

Despite the blazing, brain-melting heat, it was a great day, and I am so glad I was able to join this group!